There is literally no end to the number of mountain trails you can explore in the state of Himachal Pradesh. In every nook and corner, meandering through virgin folds of the Himalayas, there is a new trekking route to leave your footprints on. One such magnificent trek snaking along the loftiness of Pirpanjal is Deo Tibba Basecamp Trek. 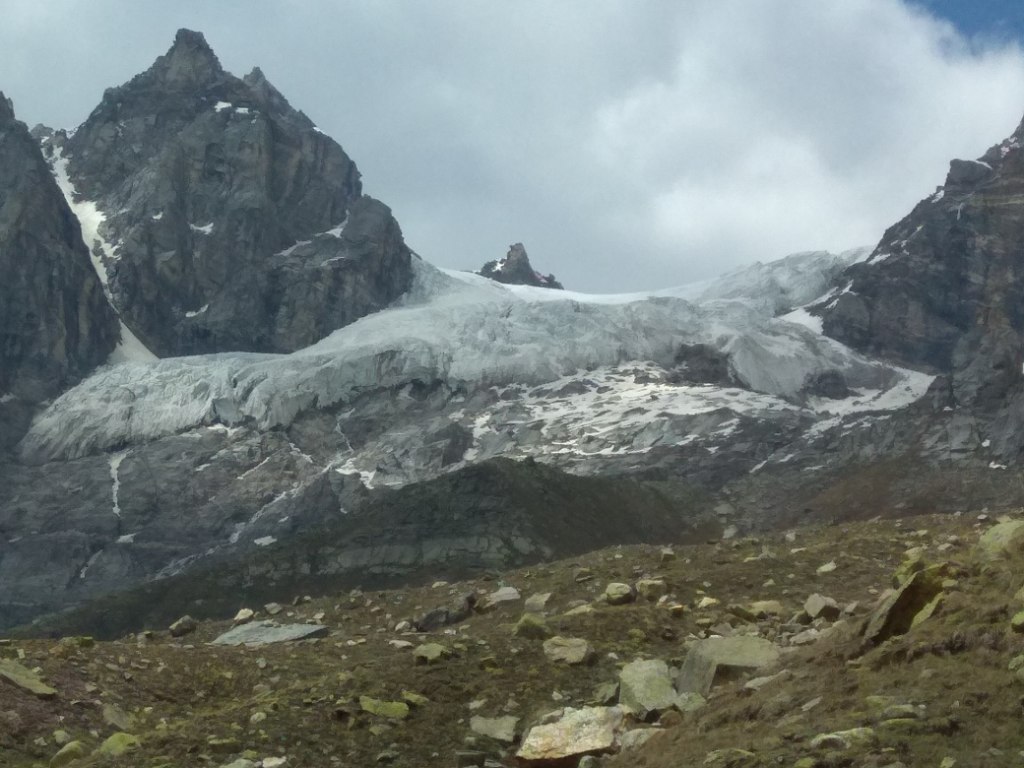 The trek covers a total distance of around 37 kilometres, starting and ending at a lovely hamlet called Khanol. The trek is usually of 5 days, but it can be spaced out and extended to cover in 6 days as well. That way, you will get longer windows for rest and also enjoy the surroundings of each campsite without any imminent rush. But whatever be the span of your trek, it will take you along one of the most picturesque courses of Himachal. From lush green meadows giving way to thick forests of alpines and birches, with the majestic Pirpanjal standing sentry all around, to pristine waterfalls, exquisite moraines, and high altitude lakes ? Deo Tibba Basecamp Trek has it all.

Following are the important facts you need to know about the trek. A Short Itinerary

Take a look at the short 6-days itinerary of Deo Tibba Basecamp Trek, touching all the important highlights in brief.

The Story of the Trek

Like most treks of this region, Deo Tibba Base Camp trek starts at Manali. An hour and a half's drive from Manali will take you to the beautiful village of Khanol via Jagatsukh. These hamlets don?t have much to offer, but given you will be spending the next few days cut off from civilization, they are your last chances to bask in the local culture and also stock up on some dry food and necessary belongings.

From Khanol onwards, it is a long walk to your first campsite Chika through deep forests of pines, oaks, deodars and a plethora of wild berries and flowers. This path picks you up from dainty village neighbourhood and drops you right in the middle of the true Himalayan wilderness. As the route snakes along for 5-6 hours, the glimpses of the mountain after which the trek is named starts playing hide and seek with you in the distance. 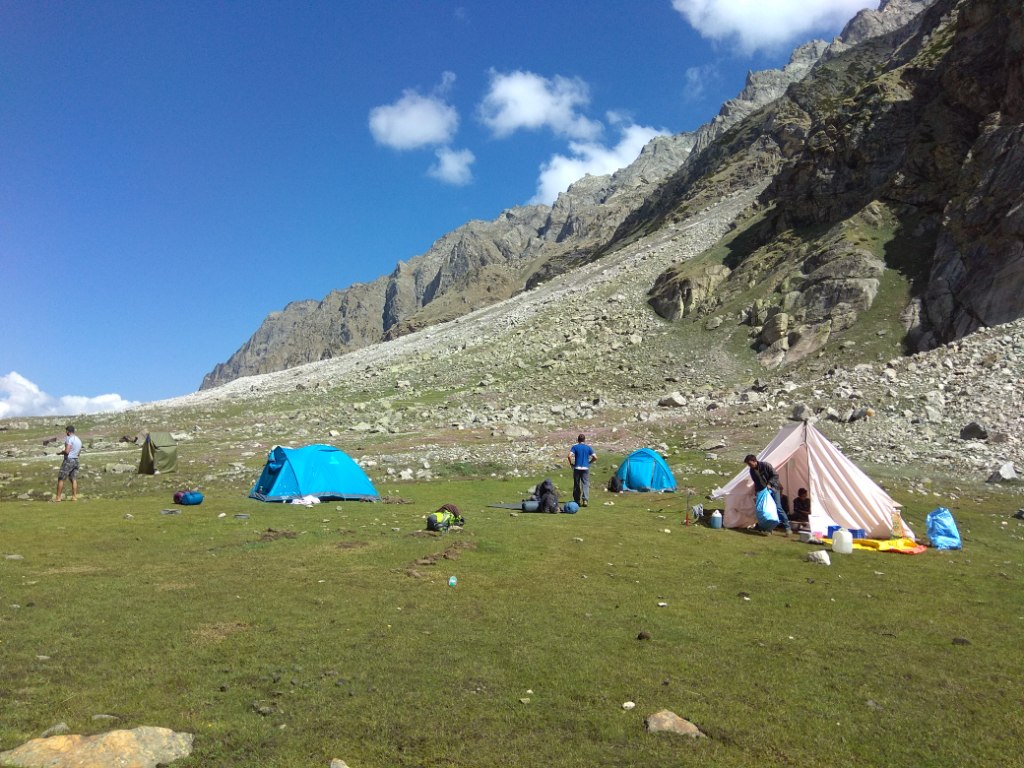 As you reach the Chika campsite at the end of the first day, the view of the gorgeous Spiti Valley opens up completely in all its grandeur, with snow-white peaks rising above proudly ? a glorious, tempting reward for completing a tiring first day?s trek. Leaving your bags at your respective tent, you can also walk to the nearby Nag Mandir if you still have energy and enthusiasm. The shrine is quite a spectacle and revered enough in the locality to deserve a visit, especially if you?re religious- minded.

The second day takes you on a trod along the brimming mountain brook called Jagatsukh Nallah and through occasional patches of forests, till you land in the vast stretches of green meadows leading you to Seri. Once a glaciated lake, Seri is now all drained up and covered in lush greens, strewn with boulders here and there. Wildflowers grow abundantly across its stretch, their population mostly dominated by rhododendrons. Keep an eye on the horizon as you walk to see the beautiful, cascading Tainta waterfall looming in the background.

After an overnight stay at Seri, you will be heading towards Tainta next. If you are doing a 6-day trek, then day 3 has the least ascent and quite an opportunity to relax and acclimatize, but quite the opposite if you?re aiming at a 5-day trek. The journey to Tainta is quite peaceful and rejuvenating and rewards you with the first close-up views of the majestic peaks of Deo Tibba and Indrasan from an elevated moraine field. 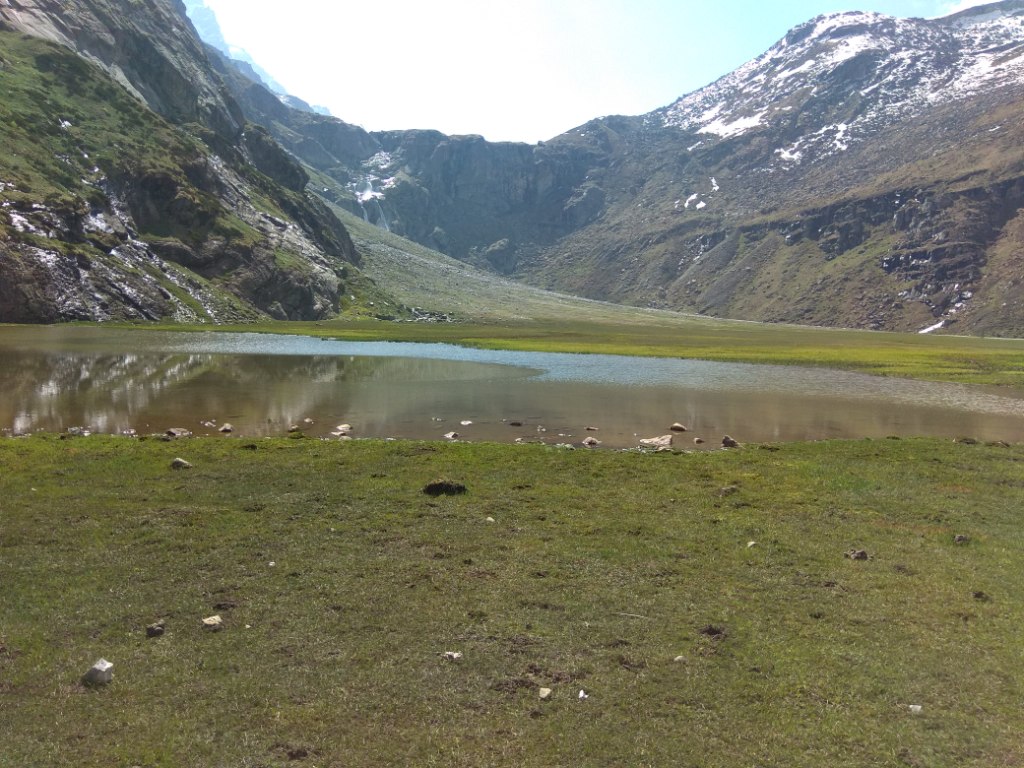 Views of Mount Deo Tibba (6001m) is an important highlight of the trek, which stays with you throughout the journey. As per Hindu pantheon, where the Himalayas play a pivotal role as a premise, Mount Deo Tibba resembles the ?abode? or the ?seat? of ?Dev?, meaning Gods. Nearby peak Mount Indrasan (6220m), the view of which also accompanies you along the trek, is believed to be the throne of Lord Indra, the King, and Ruler of Heaven and its residing Gods according to the mythology, and this arrangement is how he holds an important meeting with his important subjects.

Other than Deo Tibba, excursion to Chhota Chandratal Lake is another highlight of the trek. Situated at an altitude of 4480m, the emerald blue glacial lake is set in a paradisiacal ambience, with bobbing heads of wildflowers adorning its shore in bountiful. The backdrop of the lake will totally make up for the steep climb that leads you to its banks.

With the lion?s share of the trek now over, you will be retracing your steps back to Chika next morning, once again through the hauntingly beautiful meadows of Seri. A small rustic locality called Dudu Pathar will fall on your way, where you can stop to have lunch. The rest of the trek is a fairly easy descent from there back to the base camp Khanol, with a night?s halt at Chika campsite. Your ride will wait at Khanol to drive you back to Manali.

Manali is fairly well connected with all the important cities and towns of the area, like Delhi, Chandigarh, Amritsar, and Pathankot. Buses run straight for 536km from Delhi to Manali at takes around 12-14 hours to reach, depending on the type of bus and traffic. HPRTC buses and Volvos both are available for the trip from ISBT Kashmere Gate and tickets can be booked online to guarantee availability. You can hire private cars for the trip as well.

For travelling by train, there are quite a few to take you from Delhi to Pathankot and then from there to Jogindernagar, which is 163km away from Manali. You can also take a bus from outside the station for the distance.

Air travel is facilitated by Bhuntar Airport in Kullu which is 50km away. Buses are a cheap means to reach from the airport to Manali. Cabs are available too, but they charge a bomb.