Written by Rupsha on 15-Feb-2020
Read About Author

Trekking has always been considered somewhat of a soft-adventure. But if thrill, excitement and a touch of danger are what your heart desires, then the Rupin Pass Trek of the Himalayas is tailor-made for you. With its varied and contrasting landscapes, the Rupin Pass trek gifts you with surprises every so often. The journey through the winding course is so diverse, that it almost leads you to believe you’re on a cross-country trek in some mythical land! 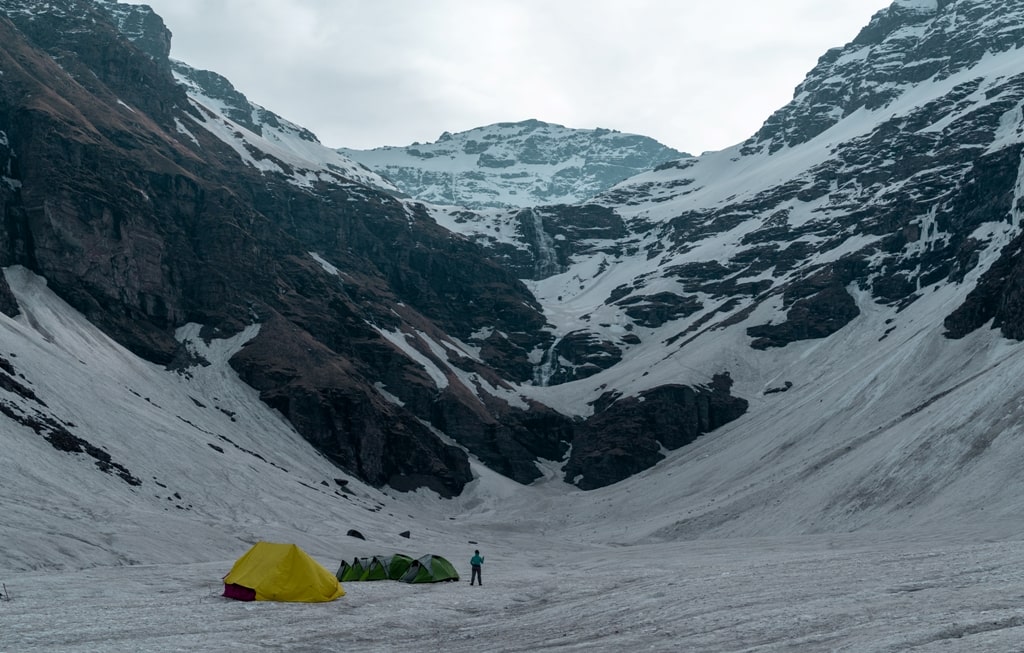 Rupin Pass is a high altitude pass fanning across the lofty Himalayan mountain range at an altitude of 15,250 ft. It is a popular & well-liked hiking route for the adventurous, which begins from the quaint village of Dhaula, Uttarakhand and concludes at the pictorial Sangla valley, Himachal Pradesh. The trail twists & turns and the altitude of Rupin Pass trek is 4650M above the sea level.

The trek, however, isn’t just popular among hikers due to its staggering height but more so for its vivid scenery changes and astounding beauty. Taking you across perpetually changing landscapes from verdant meadows dotted with wildflowers to dense alpine forests. The gushing waterfalls to hanging valleys, enchanting snow bridges to vast expanses of grasslands. The Rupin Pass Trek perfectly portrays the distinction of two states. Filled with majestic views the Rupin Pass has it all; a slice of heaven on earth.

Highlights of the Trek

Alternate ways on how to reach Rupin pass trek

Perched atop a high altitude, there are different trails that can be used to access the Rupin Pass. One of them starts at the charming little village of Gosangu, Himachal Pradesh. Usually, trekkers and adventurers prefer to travel to Gosangu by road from Shimla via Rohru. The alternate route to Rupin Pass begins at Naitwar, which can be accessed from Dehradun via Dhaula. 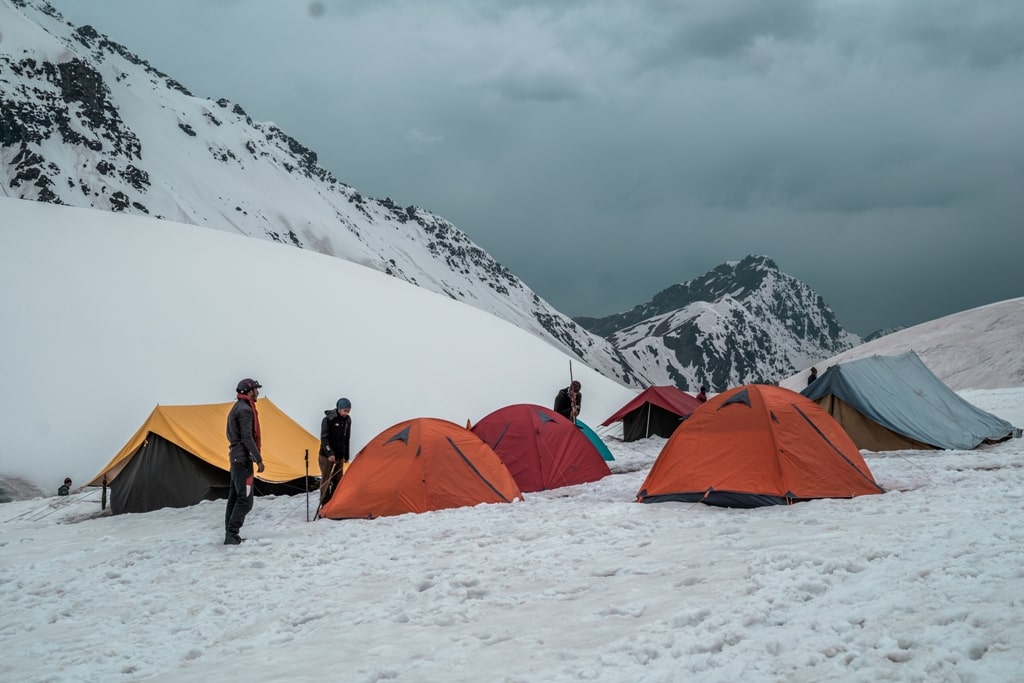 The Rupin Pass consists of trails dug out of deep folds within the mountain, creating winding routes and wooden bridges. A short while into the trek you will be met by the sometimes rushing, sometimes gliding river Rupin, which will keep you constant company for the remainder of your journey. You are also to cross the Jhaka village of Himachal, popularly referred to as the hanging village. Its unique position at the utmost fringe of the mountain makes it appear as if to be hanging from the cliff.

Along the way, you witness white Rhododendrons dotted in the vast expanse of green meadows. And while you will encounter many waterfalls and streams throughout your journey, a sight you will live to remember can be found in the picturesque Rupin Valley. Here, thousands of waterfalls collide to flow down from the mountain range; the height of the descent gives off the illusion that the downpour is straight from the abode of god.

The trail at various places also passes via forests of Oak, Fir & Rhododendron. The doorway to the forests is so unprecedented, that will leave you awe-struck. Towards the conclusion of your expedition, you will be greeted with the mesmerizing view of the lofty Kinner Kailash peak. And you will know that nothing could have served as a better ending to your 8 days long journey. The meandering climb through the Rupin pass is as thrilling as it gets!

The Dynamic People & Culture of the Rupin Valley

As you hike your way through, guided by the Rupin River, you will find yourself crossing various uninhabited places but also some off-center, interior villages of Uttarakhand and Himachal. The hamlets you will spot are calm and quaint; almost giving off the impression that they have been cast under a sleeping spell. The people are diligent, amiable and welcome you with smiles. The architecture of their accommodations & attires is simplistic in nature. Share a warm cup of tea with the locals while learning all about their history, culture, and livelihood in the mountains. Also, get a chance to explore and acquaint yourself with the vivid wildlife of the region. 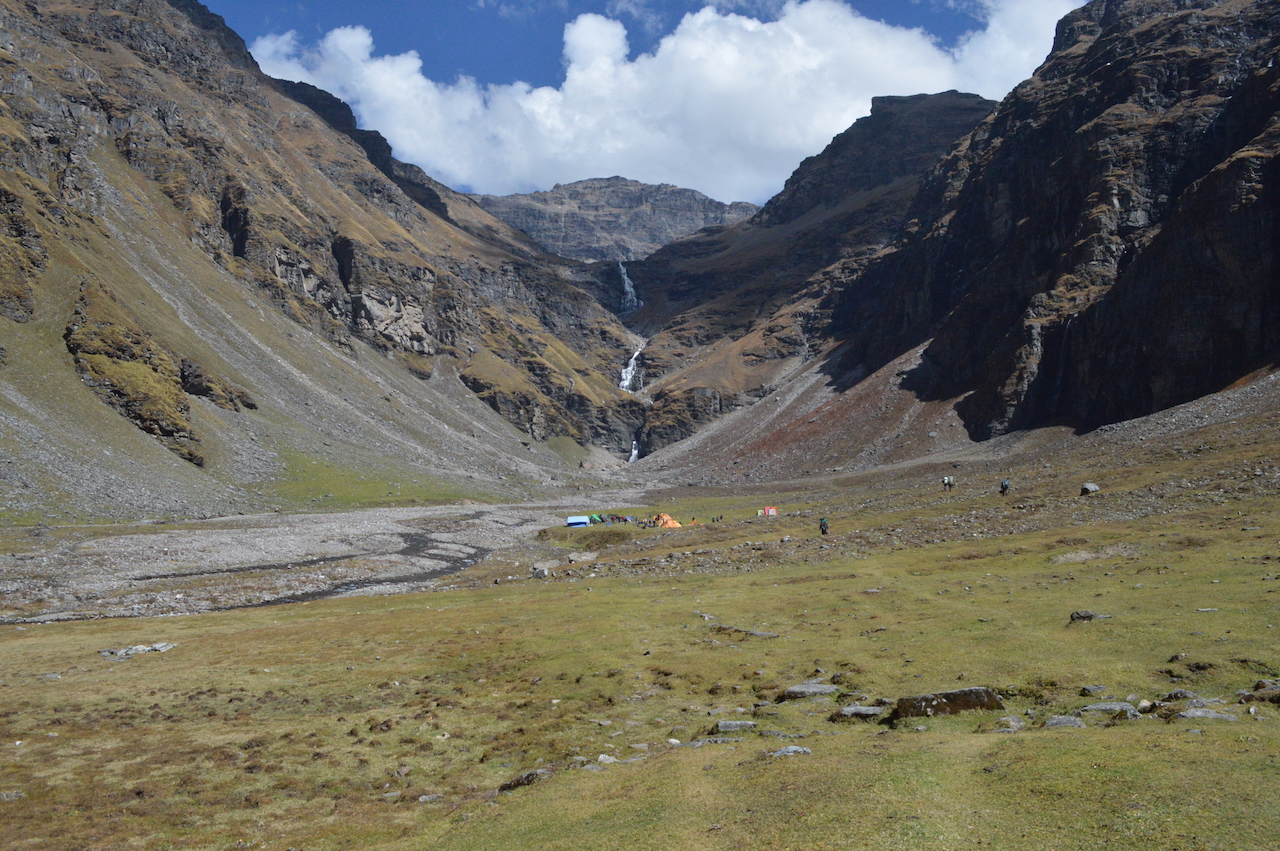 As it is with most treks in the Himalayan range, the Rupin Pass trek too is planned best in two seasons. The first choice being in summer (May-June) before monsoon and the latter being post-monsoon (Sept-Oct) that is autumn season.

Rupin Pass in Summer (May/June): Starting from Mid May to the end of June, Rupin is its true majestic self. While the Rupin Pass weather will be comfortable through most of the trek, you can also expect moderate to heavy snow during this time owing to residual snow of the winter. The nature of snow is slushy as it melts during daytime and refreezes again in the night. The summer also brings forth with it a bountiful of rhododendron blooms. The meadows are found flourishing with these wildflowers looking like a sort of dream. If you want to hike with ease, watch the splendour of wildflower blooms as well as experience winter wonderland, then Rupin Pass in May-June is the ideal season for you. The Rupin Pass temperature during pre monsoon is hot during the day varying from 20-28 degrees and its chilly during the night with the temperature ranging from 4-5 degrees. Do not forget to pack your woolens. The temperature of Rupin Pass in May and June is pleasant.

Rupin Pass in Autumn or Post monsoon (Sep/Oct): Rupin Pass weather after monsoon is magnificent; the sky is clear and haze-free, the meadows are greener and spotted with a variety of flowers, the grass turns a pleasant shade of golden-yellow and the temperature starts dropping. If one is lucky, they may also experience fresh snowfall on the higher altitude. If you want to experience the raw and unfiltered beauty of the Rupin pass trek there is nothing better than Rupin Pass in September-October. The Rupin pass temperature during post monsoon season is cold comparatively. In the lower campsites the temperature varies between 13-17 degrees during the day and 0-7 degrees during the night. The Rupin pass temperature can be as low as 0 degrees at the higher campsites.

With a vast stretch of distance that is 52 kms of trek distance being covered within 8 days, the Rupin Pass trek in India is considered moderate to difficult in terms of difficulty. But the word ‘difficulty’ has always been a relative term. Simply speaking, if you are someone who maintains a fit and active lifestyle, the ascent and descent will never feel like an ordeal. The journey smooth and very much enjoyable. 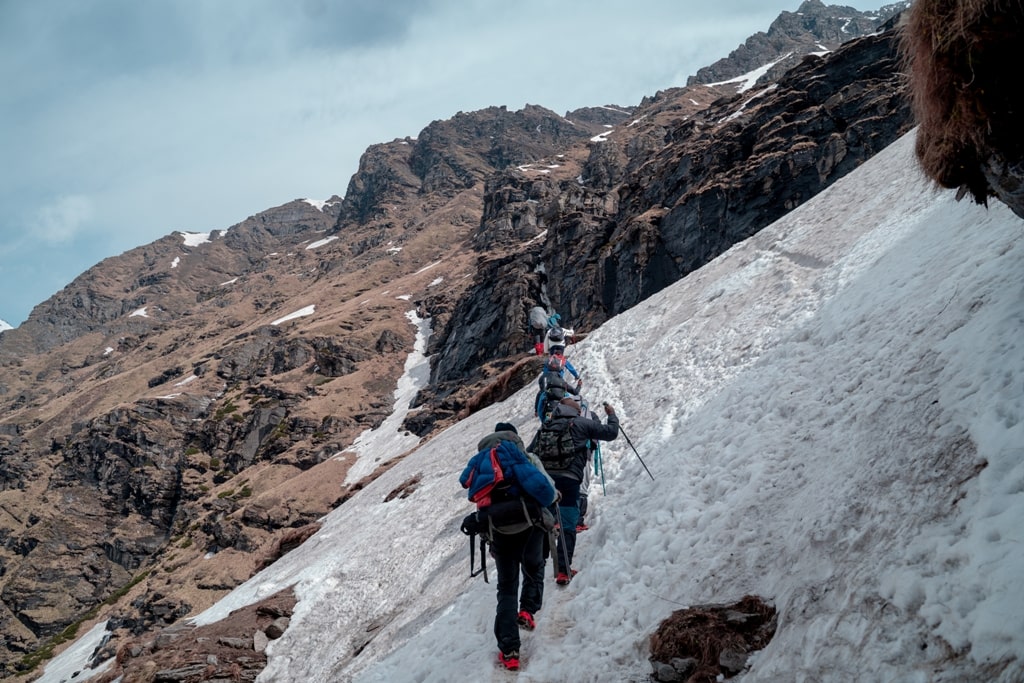 The trail covers a variety of landscapes: tranquil meadows, rugged terrain, and hikes on the narrow roads at the edges of cliffs. It also has occasional descends and climbs that can be overwhelming for a few but equally exciting. That being said, since it is a high altitude trek, it is essential to remember that an experienced hiker will find it relatively easier to traverse the pass. For a novice, however, the trek may be difficult at times and the snowy trek trail will certainly challenge you. But experiencing the beauty of the place first-hand will make you never want to stop exploring.

You can simply avoid any difficulties by keeping yourself hydrated throughout the trek & following the tips provided by your team leader. Your climb through the rough terrain, slippery land, and hard snow are nothing but part of your adventure. And oh, what a grand adventure it will be!

Written by Rupsha on 15-Feb-2020
Read About Author