Written by Manvendra on 19-Jun-2020
Read About Author 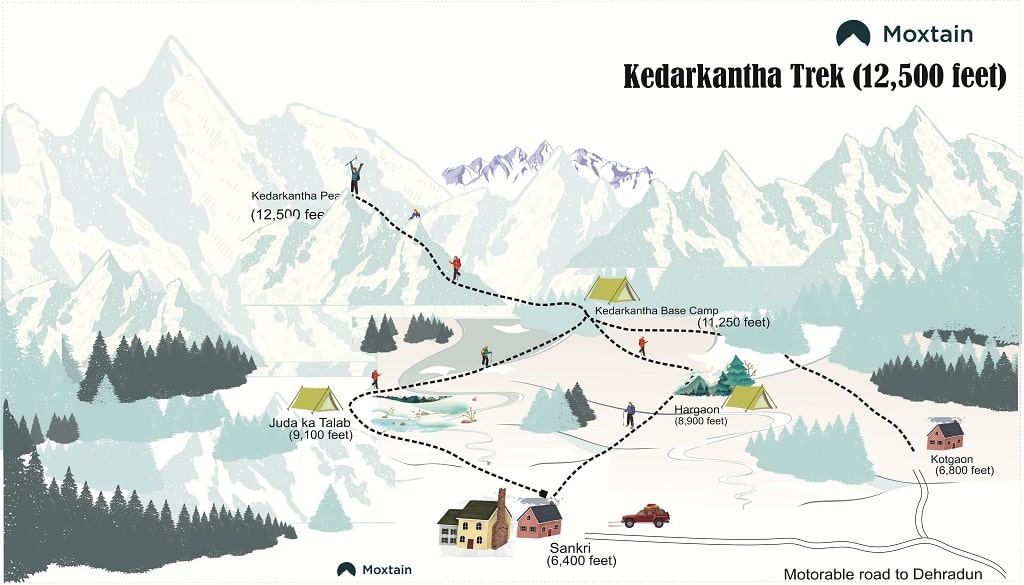 The popular route to Kedarkantha starts from Sankri. This route covers Juda-ka-Talab and Kedarkantha Base campsite while ascending to the Kedarkantha summit.

A jungle of Pine, Rhododendron and Oak trees continues to accompany you throughout the trek route. You'll come across a canteen half-way to Juda-ka-Talab from Sankri. It’s a noticeable clearing in between the jungle. And you will find many trekkers stopping by at the canteen for some light snacks and tea. And you will find many of them just having a break from continuous walking. The route is a straight ascend of the moderate grade for this day.

The next day while climbing from Juda-ka-Talab to Kedarkantha Basecamp, the route is more elevated as compared to the day earlier. The route seems to be a tiring one between the zig-zag trails in the jungle of Rhododendron and Oak trees. But once you reach the Kedarkantha base camp, a clear view of the snow-laden peaks is the reward. Kedarkantha Base camp is a large clearing amidst the jungle. All the trekkers, halt here before the attempt for their final ascent to the Kedarkantha summit.

The route from here on the next day continues into the jungle in the early morning. This tree line however ends at somewhere half-way before the final ascent to the summit. This place has a small canteen as well. After this, it’s a straight ascend to the summit and in the name of trees, you will only find a few rhododendron shrubs. The route narrows as you approach the summit.

The route to return from the summit is chosen from the other end of the Peak. Just 100 meters down the peak is a Shiva temple. And from here it is a vertical descend all the way down to the canteen where the tree line ended. Sliding down is the best way down. You will find everyone sliding through the snow. It’s the most interesting part of the trek. And once you reach the canteen, walk to the Basecamp. Early morning ascends for the summit result in our return to the basecamp at around lunchtime, even if you are a slow walker.

After lunch at the base camp, you have enough time. And at Moxtain, instead of retracing the path to Juda-ka-Talab, we plan our itinerary to descend down and spend the night at Hargaon. Hargaon is around 3 Km from the Basecamp. We reach there in the afternoon. You camp at Hargaon on the 4th night.

And from Hargaon on the next day, we descend to Sankri and reach around lunchtime. Many trekkers plan to return back to Dehradun on the same day. But this becomes a bit hectic because returning to Dehradun from most of the shared vehicles leave somewhere around 12 noon. So for today, the option you have for returning is to hire a cab, all for yourself. This comes out a little expensive at around Rs 6,500/- and also the availability of the cab is not certain. So, for the day, it’s better to take a halt at Sankri. Your package with moxtain already includes your stay at our Homestay.

Usually, people opt for the route from Sankri to the Kedarkantha Summit but there is also an alternate Kedarkantha trek route that starts from Kotgaon. Kotgaon is around 1 km before Sankri while coming from Dehradun.

Written by Manvendra on 19-Jun-2020
Read About Author