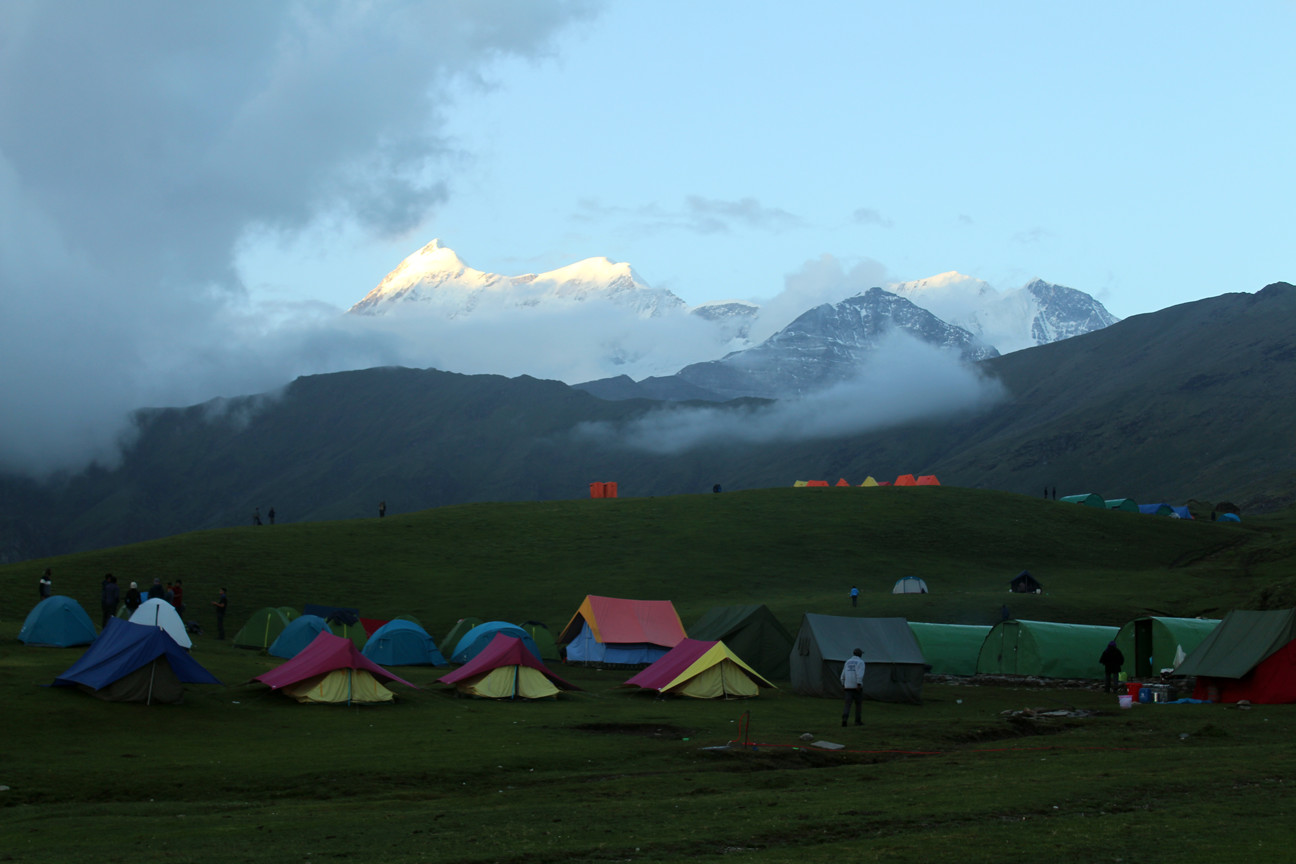 The subtle delicacy of this Himalayan sojourn enamours one with the grandest grandeur of twin grasslands. Ali Bedni Bugyal trek is the beautiful amalgamation of 2 scenic meadows -Ali Bugyal and Bedni Bugyal. These mammoth meadows stun you with an infinite expanse of green carpet flanked by Himalayan giants of Mount Trishul and Nanda Ghunti. The colossal Himalayan ranges stretching from Chaukhamba to Neelkanth to Mandani, Mrigthuni, and Kedarnath are the prime attractions of the trek. The imposing peaks resplendent with the golden rays of the sun at dawn and dusk are a sight to behold. Meandering trails through thick Conifers and deep dark woods are soaked with natural splendor. The winding trails are lined by the fauna of oak, rhododendrons, walnut, pear and Himalayan roses. As one journey along, the warbling wind and chirping of mountain birds are your constant companions. What strikes you in the face is the sudden epiphany of the lush blanket as soon as the dense tree line disappears. You spend 2 days in this lavish bounty of verdurous greenery.

All this plus one gets a chance to explore the mountain villages of Didna & Wan and learn about the customs & lifestyles of the local populace. The temples of Nanda Devi and Latu Devta (local deity) offer a devout rendition to the trek. Bedni Kund at the Bedni top is a site of religious reverence for locals. The once famous Roopkund trek was a part of this trekking trail. In fact, the twin meadows were the major highlights on the Roopkund Trek. Due to the ban by the honorable High Court of Uttarakhand, Roopkund Trek cannot be undertaken until further notice. The Ali Bedni trekking trails are much quieter and calmer as a result of this ban.

Perched at an elevation of 12,550 feet, Ali Bedni Bugyal is known to be Asia’s largest grassland sitting in the Himalayan lap. It is strategically located on the border of Garhwal and Kumaon region, in the state of Uttarakhand.

Bugyal means alpine meadows in the local dialect. The high altitude bugyals always grow above 10,500 feet and below 13,000 feet.

If Ali Bugyal is flanked by a dense coniferous forest on its slopes, the pretty mountain lake of Bedni Kund compliments the beauty of Bedni Bugyal. The clear reflection of the majestic Mt. Trishul massif on the crystal-clear waters of Bedni Kund is simply surreal. The magnificent view of the revered Mount Trishul at the sprawling Ali Bugyal is imposing. At Bedni, Mt. Trishul and Nanda Ghunti stand tall as if safeguarding the rolling meadow under their protective embrace.

Ali Bugyal and Bedni Bugyal are the landmarks of the famous Roopkund trek. Sadly, the Roopkund trek has been banned due to the damage caused to biodiversity because of excessive trekking.

These double meadows provided the ideal ground for acclimatization to the high-altitude Roopkund Trek. A 23 km trek from Bedni Bugyal led to the once-famous Roopkund trek.

The basecamp of Lohajung is rooted deep in a legend. History has it that Goddess Parvati killed demon Loha at Lohajung. He blocked her way when she was going to meet her paramour the revered Lord Shiva in the mountains.

How to reach Ali Bedni Bugyal?

Kathgodam is well-connected to major cities of India like Delhi, Lucknow, etc. by train. From Kathgodam to Lohajung, it takes around 10-11 hours by road.

Kathgodam is well-connected with most of the major cities of India like Delhi, Lucknow, etc. by road. From Kathgodam to Lohajung, it takes around 10-11 hours by road.

Reach Pantnagar from Delhi by flight. There are flights available every day from Delhi and the flying time is 1 hour. Kathgodam is at a distance of 65 km from Pantnagar, it takes around a 1-hour drive to reach Kathgodam from the airport.

Reaching the bugyals is easy. The trek commences from Lohajung which is a 10-11-hour drive of approximately 220 km from Kathgodam. It takes 5 days to reach the summit and come back to Lohajung village. There is a proper motorable road till Lohajung; beyond that, you walk your way through the scenic terrain of Uttarakhand Himalayas.

This is an all-season trek which can be undertaken throughout the year. Be it spring, summer, fall or winter, each season bestows upon you a distinct vista of changing colors and contrasting landscapes.

However, it is best done from April to June and, from September to October.

Spring months of March and April treat you to snow, especially the Bedni top. One may witness snowfall till as late as early-May. In April, there is residual snow with little chances of fresh snowfall. The skies are clear in March & April. You may spot blooming rhododendrons on trekking trails. Summer months of May and June are good months to set your foot on this trek. Meadows start turning green and clear weather permits excellent mountain views.

The rains infuse the meadows with brand new life and vigor. The colorful assortment of flowers in infinite hues leaves you spellbound. The region insufflates the fragrance of fresh flowers and virginal grass. A trifle tricky but monsoon months are perfect for those who love rains and its earthy aroma.

The air is fresh & crisp, and the sky radiates in a perfect tint of blue. You may witness sporadic rains in September. Bugyals are still peppered with flowers and radiate with green grass in September.

In October, the fall colors start to appear. The grass changes from green to yellow to golden brown. You luxuriate in the amazing shades of reds, browns, cognac, and orange!

In November, the temperatures begin to fall and there’s a nip in the air. The skies are clear and the weather is pleasant in the daytime. Fall months are ideal for avid photographers who love to capture the panorama of fall colors and clear massifs with their lens.

If you are a winter freak and snow gives you the adrenaline rush, then winter months are your true calling! The meadows are blanketed in a sheath of white and snow-drifted trees line the snow-laden trekking trails.

The weather is unpredictable and keeps changing frequently in Bugyals. While mornings are usually clear, afternoons are often blanketed under thick mist from the mountains. Evenings are pleasant but nights tend to get colder.

Daytimes are warm and pleasant in the summer months of May and June. The temperature varies from plus 2 degrees to plus 10 degrees.

The temperature varies from plus 3 to plus 16 degrees between night and day.

Daytime temperature is warm and pleasant in the fall months. Nights start getting colder, especially from mid-October. The temperature varies from plus 2 to plus 10 degrees in the daytime to plus 5 to 0 degrees during nights between September to November.

Daytime temperatures remain cold with a temperature range of +2 to -2 degrees. Mornings and nights are frigid with temperatures ranging between -5 to -!0 degrees.

This trek is of moderate difficulty level. The altitude gain of approximately 4,000 feet over a span of two days is not formidable. The trekking route is a mix of gradual ascends and descends interspersed with some steep climbs.

One of the easiest and safest treks of Uttarakhand, Ali Bedni Bugyal trek traverses through two stretches of civilization-Didna and Wan Village. Wan village is quite a big hamlet in comparison with the quaint mountain villages that one encounters while undertaking other treks in Uttarakhand.

Despite being a trek of the easy gradient, Ali Bedni Bugyal trek calls for a minimum fitness level and cardiovascular stamina. One can start preparing for the trek by running, jogging, cycling and swimming.

Day 1: Drive from Kathgodam to Lohajung

We start at Kathgodam early in the morning. The drive to Lohajung takes 10 to 11 hours. We drive through the Kumaon region with valleys of Shivalik Himalayas beckoning from all angles. You explore scenic towns of Almora and Kausani en route. 5-6 hours into the drive, you reach Gwaldam, the Garhwal Administrative region. The winding route trails through conifer forests. The last lap of the journey from Deval to Lohajung attains considerable altitude.

You stay in Tourist Guest House or a lodge for the night.

Day 2: Trek from Lohajung to Didna

Our actual trekking starts on day 2. After feasting on a heavy breakfast, we start early from Lohajung to reach Rani Bagad. It takes almost 2 hours on a rocky trail lined with oak and rhododendron trees to reach Rani Bagad. We cross the river bridge over river Neel Ganga at Rani Bagad and trek for another 3 hours to finally reach Didna, our final destination for the day.

We start early after gorging on a sumptuous breakfast. Today's trek is a mix of easy trails and some steep & exciting terrains. We cross coniferous forests and mini meadows and vast patches of green to reach Asia’s largest meadow Ali Bugyal. It takes almost one hour to reach the summit of the widespread grassland which offers 360-degree views of Himalayan giants of Mt. Trishul and Nanda Ghunti.

Enjoy the views of star-lit mountain sky from your camps.

From Ali Bugyal, you take a minor descent and moderate ascent over a ridge, along the lush Himalayan flora. It takes 3-4 hours to cross this ridge and reach the enormous meadow of velvety grassland, Bedni Bugyal.

The meadow strikes you with its exquisite beauty and serenity. Bedni Kund reflects the sacred peak of Mt. Trishul on its pious waters. The famous Brahma Kamal flower can be spotted near Bedni Kund. It is also the stopover for Nanda Devi Yatra, a ritual procession held every 12 years.

Nearby, there is a small temple of Goddess Nanda Devi and shrine of local deity Latu Devta.

From here, a gradual descend of 2-3 hours takes you to Ghairoli Patal, your destination for Day-4.

Overnight stay in camps set amidst the lap of nature.

Day 5: Trek to Wan and drive to Lohajung

Gorge on a heavy breakfast before embarking on a long descent to Wan. As you descend to Wan through the forests of Ghairoli Patal, the thick fauna and melodious chirping of mountain birds floor your senses. You come across walnut, oak, rhododendrons and wild roses inhabiting exotic birds like flycatcher and magpies. You continuously descend to reach the iron bridge at Rani Bagad. Rest awhile and fill your water bottles. Finally, a gradual climb of 1 hour brings you to Wan. Explore the village of Wan. Drive of 45 minutes-1 hour brings you to Lohajung.

Stay overnight at Lohajung before returning to Haridwar/Rishikesh, the following day.

You can travel back via Haridwar/Rishikesh. Enroute visit the holy towns of Karnaprayag, Devprayag, and Haridwar.

Celebrate your mountain rendezvous by rafting at Rishikesh.