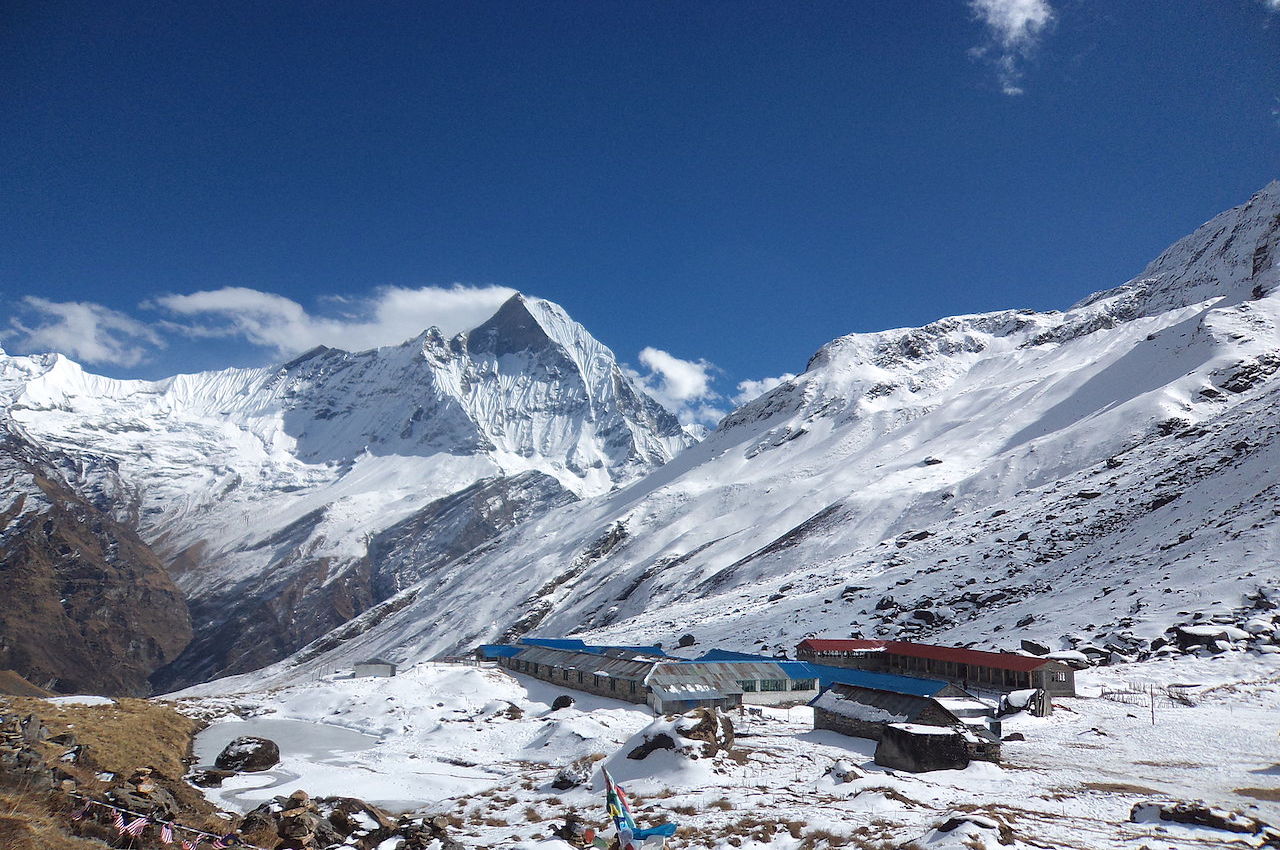 Adventurous, Bold and Challenging- The ABC's of Annapurna Base Camp

The colossal Annapurna massif is the 10th highest mountain in the world. Despite being one of the most treacherous trails with the largest number of fatalities in the 7,000 to 8,000-metre mountain ranges, Annapurna Base camp (ABC) holds a magnetic charm that pulls trekkers to its terrain. It is on the wish list of every trekker. ABC is one of the few treks that journey along with such diverse landscapes and brings you close to the 7,000 to 8,000-metre mountain ranges in such a short period. The trek journey traverses through banana plantations, terraced rice fields, lush rhododendron vegetation, and staggering mountain peaks. The trek route to this popular destination commences at Pokhara, which is at a distance of 200 km from the capital city of Kathmandu.

Beautifully nestled between the mountain peaks of Annapurna 1, Annapurna South, Machapuchare, and Huinchuli peaks, Annapurna Base Camp simply takes your breath away.

A quick glance to some facts

Note- Meal facility (no snacks) is provided when camping in our tents. You pay for your own snacks and meals when staying in a hotel, teahouse or lodge.

Weather at Annapurna Base Camp

Annapurna Base Camp trek can journey during any season. It treats you to an amazing panorama which is distinct to each season. However, the best season to undertake the trek is the fall and the spring season. The weather is warm and cool in the spring season with temperatures ranging from 17 degrees to 20 degrees Celsius during the day. Early mornings and nights are slightly cooler. The skies are clear and the landscape looks lush green with beautiful flowers blooming along the trail.

The summer season from June to August witnesses a lot of rainfall, thunder, and humidity. Some of the hiking trails of the ABC trek are unaffected by the rains. With the right preparation and equipment, you can even undertake the ABC trek during the summer season. The fall season from September to November is the most favorable season to do the ABC trek. The weather is fresh and clear to enjoy the beautiful views of mountain peaks and scenic Nepalese landscape. The temperatures range between 15 to 17 degrees Celsius in the daytime and 5 to 7 degrees Celsius in early mornings and nights.

The winter months of December and January bestow upon you a snowy landscape which is nothing short of a Winter-Wonderland. The temperatures fall under zero and you need layered winter clothing and proper equipment to be able to undertake the trek. The trails become treacherous and you may require some mountain climbing experience to undertake the trek during winters.

Amazing facts of Annapurna Base Camp

You arrive at Pokhara and revel in the beauty of this beauteous mountain town bedecked with mountain peaks at a distance, placid lakes, and caves. Located at a distance of 200 km from the buzzing city of Kathmandu, Pokhara stuns you with a serene landscape which is urban yet pleasantly rural. In addition to the amazing natural beauty, Pokhara treats you to the newest attraction of paragliding.

Day 2: Drive from Pokhara to Nayapul and trek to Ghandruk

After a hearty breakfast at Pokhara, you head towards Nayapul. It takes one and a half hours to drive to reach here. From Nayapul begins your actual trek which starts with a stone-paved path with stairs followed by a gradual ascent of 5 to 6 hours to reach the camping site at Ghandruk. The largest village on this trek-route, Gandhruk?s beauty lies in the small stone houses that inhabit the locals. The views of Annapurna and Machapuchare stun you on the southern side. Overnight stay is arranged in the teahouses that serve the delectable Nepalese platter.

You trek your way through a muddy trail lined by beautiful villages on either side. Initial descent of 1 hour leads you to Kimrong Khola. The majestic peaks of Annapurna South, Huinchuli, Gangapurna, and Machapuchare begin to appear in full glory.

An uphill hike of 4 to 5 hours brings you to Chomrung. The route is interspersed with scenic hilly settlements, terraced paddy fields, rhododendrons, and ferns. Chomrung is located on a hilltop with stone stairs. The permit to Annapurna Sanctuary, a haven for flora and fauna is granted here. Watch the majestic Annapurna range glow in hues of orange and red at sunset.

Descend on the 2,500 stone stairs to reach a hanging bridge that takes you to Chomrung Khola and you enter a dense canopy of trees. With diverse vegetation such as rhododendrons, ferns, bamboo, the trail looks picturesque with reddish-pink flowers taking you into their embrace. A steep uphill trek brings you to Sinuwa. Annapurna 3 treats you to a scenic sight. A short hike journey to Kulidhar followed by a downhill trail to Bamboo base camp. Overnight stay in tents.

Day 5: Bamboo to Machapuchare Base Camp

This lap of the trek is arduous as you hike up to an elevation of 4,000 feet. It journeys through mixed paths of gradual ascends and descends lined with vegetation that changes from sub-tropical to alpine. As you journey through Dovan, the first village (which has only 5 lodges), you see the tip of Machapuchare mountain. The next lap of the journey brings you to Himalaya which has some quaint tea houses. An hour of the uphill trek takes you to overhanging caves called Hinku. After passing through a valley you reach a rocky terrain of 40 minutes that leads you to Bagar. Views of Machapuchare and Gangapurna peaks become prominent. River Modi Khola is seen bubbling past the valley. After crossing the bridge over Modi Khola, you reach MBC in 30 minutes.

A short trek through numerous mountains and then a sharp 90-degree turn to the left leads you to ABC. The trek includes an initial steep ascent followed by a gradual ascent with hiking above the tree line. The 360-degree spectrum of colossal Annapurna range, Gangapurna, Gandharvachuli, and Machapuchare leaves you spellbound.

Enjoy every moment in the lap of the mountains and stay overnight in tents under the shelter of imposing peaks.

You take a long trek to journey back to Bamboo. Revel in the memories of Day 5 and you gradually descend through MBC, Himalaya, Deurali, and Dovan.

You trek through Sinuwa before descending to Chomrung Khola. Reminisce the memories of Day 4 and reach Jhinu Danda settlement. A 20-minute trek leads you to the hot springs of Jhinu. Soak in the warm water to flush away the fatigue of 8 days.

Make wonderful memories as you stay overnight in the tents on one of the last days of the trek.

Day 9: Jhinu Hot Spring to Nayapul and drive to Pokhara

Wake up rejuvenated as you are all set to embark on the last lap of the trek. Reach Nayapul after taking a pleasant trek in the panoramic vista of Nepal. A 2-hour drive will bring you to Pokhara.