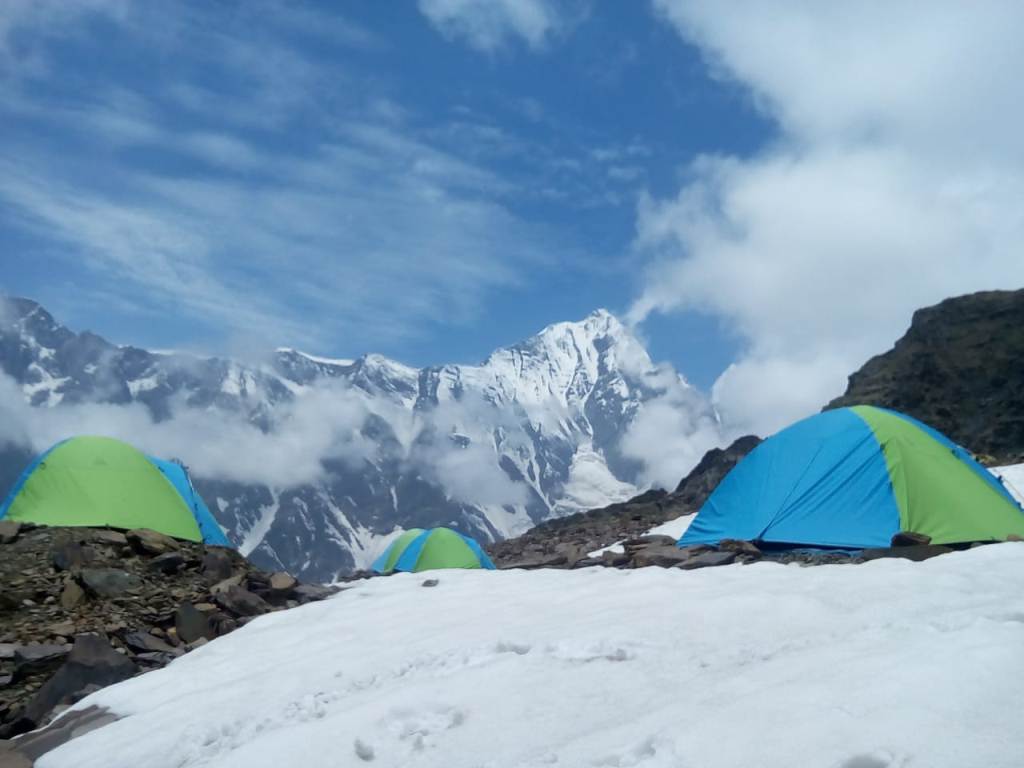 Placed around Manali, the Beas Kund Trek is another term for fascination. Beas Kund Trek is not only popular among trekkers and wanderlusts. But it also attracts nature lovers. Beas Kund is a lake that is nestled in the lap of the mountains of Himachal Pradesh. At an altitude of 3700 metres, the Kund is the origin point of river Beas. The location makes for an amazingly picturesque travel destination and an even better summer trek, to rewind and rejuvenate amidst nature.

Manali is not just known for its natural charm, it is the place where one of the most mesmerising trek trails? resides. The Beas Kund Trek is one among the most undertaken treks, and the location also makes for an enthralling weekend getaway. This trek is an ensemble of natural beauty, view of the mountains, interesting landscapes, and serenity. The locations that fall en-route the trek are, the Pir Panjal Mountains, Dhundi, Hanuman Tibba, Indrasan Peak, Deo Tibba, etc. The trail of this trek ranges from easy to moderate, which makes it manageable even for the beginners.

About the Beas Kund Trek-

The Beas Kund trek is a 3-day trek, while it can also be spread over 5- 6 days, depending on the number and ease of the trekkers. The total distance ranges from 47 to 49 kms. The Beas Kund trek makes for an ideal summer trek. The best months to venture here would be May and October. The winter months are not quite preferable due to the stark temperature fall and biting cold. Carrying a few eatables and drinking water is a nice idea since there are not many stops, where one can find food. The Beas Kund trek is one of the most mesmerising treks in the country. The beauty of the mountains, walking along a glacial lake, magnificent views, momentary camera shots, sleeping under the starry sky, taste of the serene and simplistic life- all amount to a worth living for the experience.

Manali is the base camp for the Beas Kund trek. Manali is well connected to most parts of the country, and taking a bus might be a good option. There are a number of public as well as private buses, available from Delhi, for Manali. If travelling by air is more suitable, then one should opt for a flight to Bhuntar. Bhuntar is just 52 kms away from Manali.

Day 1: Pickup at Manali and drive to Bakarthach

Day one of the trek comprises of- heading out from the base camp Manali to Solang and finally reaching Dhundi. Manali is the base camp for this short trek. Solang is a short drive of about 15 kms, from Manali. From there we drive up to the Dhundi road link. The drive shortens the duration of the trek and saves time. Solang is the base point for a lot of treks in and around Himachal Pradesh. Once in Solang, the trek vibe sets in. It is popular for adventure sports like skiing and paragliding. Apart from skiing, the scenic beauty of Solang is quite the attraction, with en-route spotting and viewing of the Pir Panjal peak, seven sister's range, and Hanuman Tibba. There is an ascent from Solang that leads to Dhundi, and the trail is accompanied on one side by the Beas stream. Dhundi is a quaint village hamlet, one may not find a lot to do and explore here, but the serenity this place has to offer cannot be compared. Since Dhundi road link is drivable, we will drive from Dhundi to Bakarthach. 6 kms from Dhundi, lies the charming site called Bakarthach. The word itself means, ?the shepherd?s field?. The 'Gaddi' tribe lives here and one can get the taste of living in the meadows. An overnight stay in the meadows is one of the main delights of this excursion. Bakarthach is a base camp for other excursions to Hanuman Tibba, Ladakhi peaks, etc. We will set up the tents at Bakarthach campsite. Meals at the camp, are inclusive of the package. While city visits, eateries outside the camp, are not covered in the package. Explore Bakarthach, relax for a few hours and prepare for the next day's excursion.

Day 2: Trek from Bakarthach to Beas Kund, and return trek to Bakarthach

The trek proceeds from Bakerthach to Beas Kund and wraps up, just like the way it unfolds. The next length of the trek spans over 6-7 kms, and you will start from Bakarthach to reach Beas Kund. This is the most important portion of the entire journey. You can witness boulders, spruce trees and some patches of rough terrain en- route. A short walk and a minimal climb will lead to Bhoj Patr, and further onto Beas Kund. Beas Kund, a thousand- year old glacial lake placed at an altitude of 3810 metres above the sea level, lends mythological and natural significance to this region. As per the Hindu mythology, it is a belief that sage Vyas, the author of the ?Mahabharata? once meditated on the banks of the river Beas. Once the Beas plateau has been explored, we start on a return trek. Due to the lack of campsites at Beas plateau, it is convenient to return to Bakarthach for night stay. Food will be provided at the campsite.

Day 3: Drive from Bakerthach back to Manali

Some of the things that you should pack for this trek are a flashlight, sleeping bag, comfortable footwear, drinking water, sunscreen, personal medicines, raincoat, etc. Carry an extra set of clothes and a pair of warm clothes, irrespective of the season you are choosing for the trek. Beas Kund glacier is one of the natural attractions of the Himachal region. Apart from holding a mythological significance and rustic natural charm, the Beas Kund trek makes for one of the most exciting, adventurous and well-timed treks.

If a trek is called off at the last moment due to a natural calamity/unforeseen circumstances (like rains, snowfall, earthquake, landslides, strike, bandh etc.), Moxtain will issue a trek voucher for the full amount. The voucher can be redeemed upto same amount for the same trek or another trek in the next one year.

Cancellation charges are based on the total trek fee, and same for full and partial payment modes.

Pickup and Drop from Manali (Included in Package)