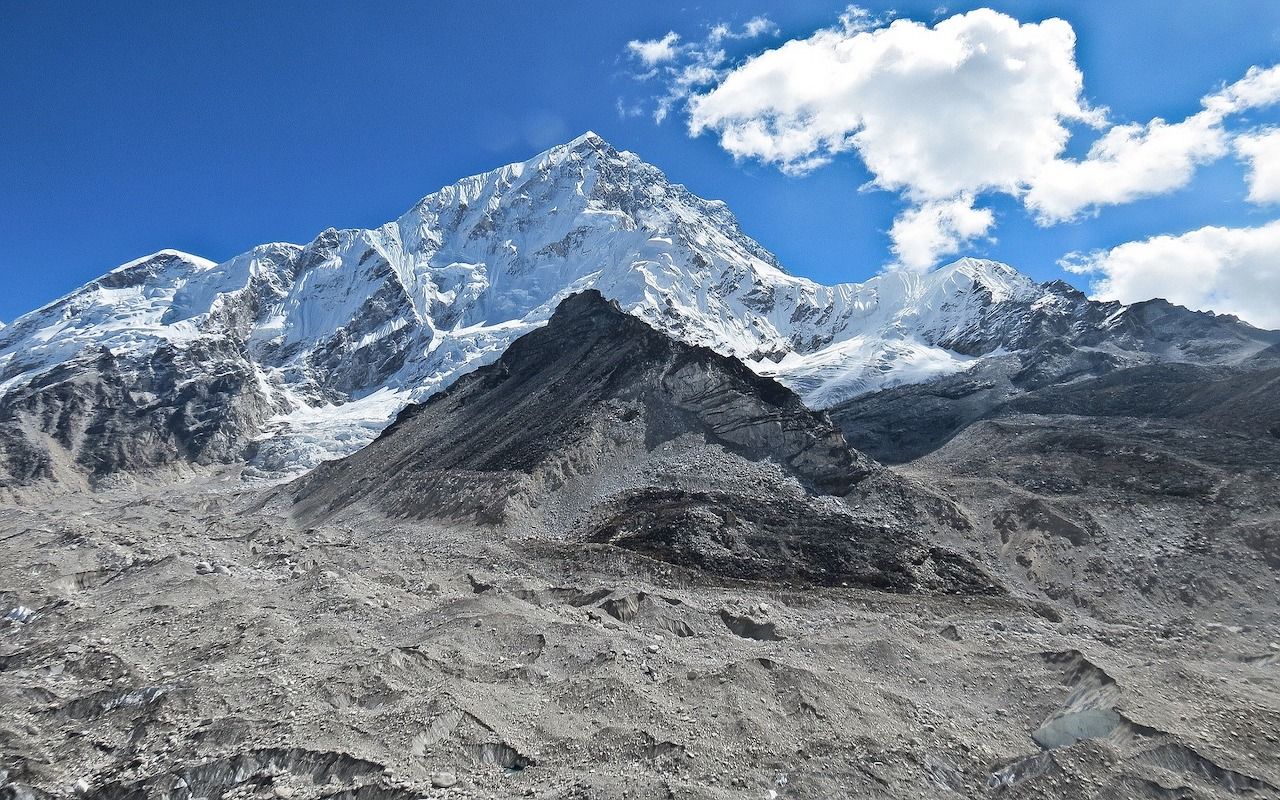 The 130 km round-trip takes around 15 days to complete; it takes 10 days to reach the base camp and 5 days to descend back, which includes 10 days of long trekking, 2 days of acclimatization, 2 days of leisure at Kathmandu and one day of departure. The trek takes you to the foothills of the imposing Mount Everest, the highest mountain in the world.

An expedition that is interspersed with thrill, adventure and awe-inspiring beauty of staggering mountain ranges and lush greenery of raw Himalayan terrain, Everest Base Camp Trek is a true calling for trekking enthusiasts. This expedition offers you the closest encounter with the majestic Mount Everest and takes you to a heavenly journey in the footsteps of legendary mountaineers like Tenzing Norgay and Edmund Hillary. You meet the friendliest locals and explore local villages, lush hamlets, cascading waterfalls, verdant forests, steep trails, and glacial moraines; it promises an all-in-one experience of a trekking expedition.

Highlights of the classic trek

Located on the border between Nepal and Tibet in the Himalayas in Asia, Mount Everest is earth's highest mountain above sea level. It is located in the Mahalangur Himal sub-range of the Himalayas. At an elevation of 29,029 feet, Mount Everest is home to 14 of the world's tallest peaks measuring above 26,246 feet.

April, May, early-June, September, October and early- November are the best months for undertaking the Everest Base Camp trek. These months boast of clearer skies, little rain and snow, and very comfortable weather for trekking.

The monsoon season, from June to September is dotted with high precipitation, strong winds, and moisture that bring frequent storms and heavy fog.

Winter storms, strong winds, and precipitation pose a hazard to the climbers during the winter season. Hurricane winds (up to 285 km per hour) that often carry sand, bits of stone, snow, and ice are a frequent occurrence from late-November to February. Unexpected winter storms can bring as much as 10 feet of snow.

Arrive in Kathmandu and get prepared for the trek. You meet your guide who briefs you about the trek. He checks your equipment and recommends if any gear needs to be purchased.

After breakfast, board a flight to Lukla from Tribhuvan domestic airport, Kathmandu. The flight route treats you to stunning views of valleys, mountain ranges, and Nepalese villages. From Lukla, you trek to Phakding which is an easy trek of 3.5 hours. The trekking route journeys through quaint villages set against the backdrop of green mountains.

Trekking route from Phakding to Namche bazaar is surrounded by colossal mountain ranges and moves along pine-flanked Dudh Koshi river. After a stopover at Monzo for lunch, you take a strenuous uphill trail amidst the lush green forest. Just before Namche, you are treated to a glimpse of Mount Everest and Mount Lohtse. Trek is slightly strenuous with a moderate difficulty level.

Acclimatize yourself to the changing altitude and climate. Explore the coffee shops, bars, restaurants at Namche Bazaar (marketplace), one of the world?s highest markets. You can visit Namche Monastery and Namche Museum, just a 20-minute trek from Namche Bazaar. You get a clear view of Mount Everest from this place. You can also visit the Sherpa Culture Museum which showcases the artifacts of Sherpa culture. You can also pay your tributes to Tenzing Norgay at a nearby memorial.

This moderately difficult trek of 5 hours takes you to a small valley of Tengboche which is one of the most beautiful spots in the entire trekking route. Tengboche Monastery, the largest Buddhist monastery in the Khumbhu region, is worth a visit.

Trekking trail traverses through a pic forest to reach Pangboche village, Pheriche and proceeds to Imja Valley in the company of the beautiful Lobuche river. A steep hike takes you to Dingboche, the highest permanent Sherpa village in the Khumbhu region. In the village of Pangboche, you will get to see a gompa or Tibetan monastery, the oldest monastery of the Khumbhu region.

It is a moderately difficult trek except for two steep hikes.

Acclimatize yourself by spending another day at Dingboche, as the next three days will take you to a challenging altitude. Take a small hike and get a scintillating view of the world?s three tallest mountain peaks, Mount Lhotse, Mount Makalu, and Mount Cho Yu. You will also be treated to numerous other mountain ranges. Visit the Dingboche monastery, one of the largest in the region. The monastery has a collection of unique and unusual relics.

From Dughla/Thukla a short and steep hike takes you to Lobuche which is just beside the Khumbhu Glacier, one of the highest glaciers in the world. Nothing prepares you for the sight that lies in front of you; a close-up of the glacier, with turquoise ice formations formed as a result of melting snow, is absolutely surreal.

The route journeys along the slope of the glacier until it reaches a small cluster of houses called Lobuche. Dughla Pass/Thukla Pass has many memorials dedicated to famous mountaineers who lost their lives on their expedition to Mount Everest.

This moderate trek journeys along the heavenly landscape of glaciers and lofty mountains. Enroute you are treated to a partial view of Mount Everest and a clear view of Khumbhu Icefall. Gorakshep, which means ?Graveyard of Crows? in the local dialect, is a sandy lakebed set against a treeless mountain scenery.

Day 11: Hiking to Kala Patthar and descent to Pheriche

Get ready for the most difficult, adventurous and rewarding part of the expedition. The trek is truly worth it because you get an unobstructed view of the Mount Everest summit and get stunning views of almost entire colossal mountains of the Himalayan Ranges.

A moderate trek coupled with a little hike before Tengboche and after Phungi Thanga will lead you to Namche Bazaar.

Enjoy the time at local bars, restaurants and souvenir shops. Namche Bazaar even has an Irish pub to get your spirits soaring.

The moderately difficult level trek leads you to Lukla as you bask in the glory of the downhill beauty.

Board the flight to Kathmandu and enjoy the beautiful views of lush green valleys throughout the flight. You have the full day to your luxury; explore Kathmandu, its local markets, local cuisine and buy souvenirs to make your trip memorable.

You travel back home reminiscing the memories of past 15 days spent in sheer bliss and magical landscape of mystical Himalayas.