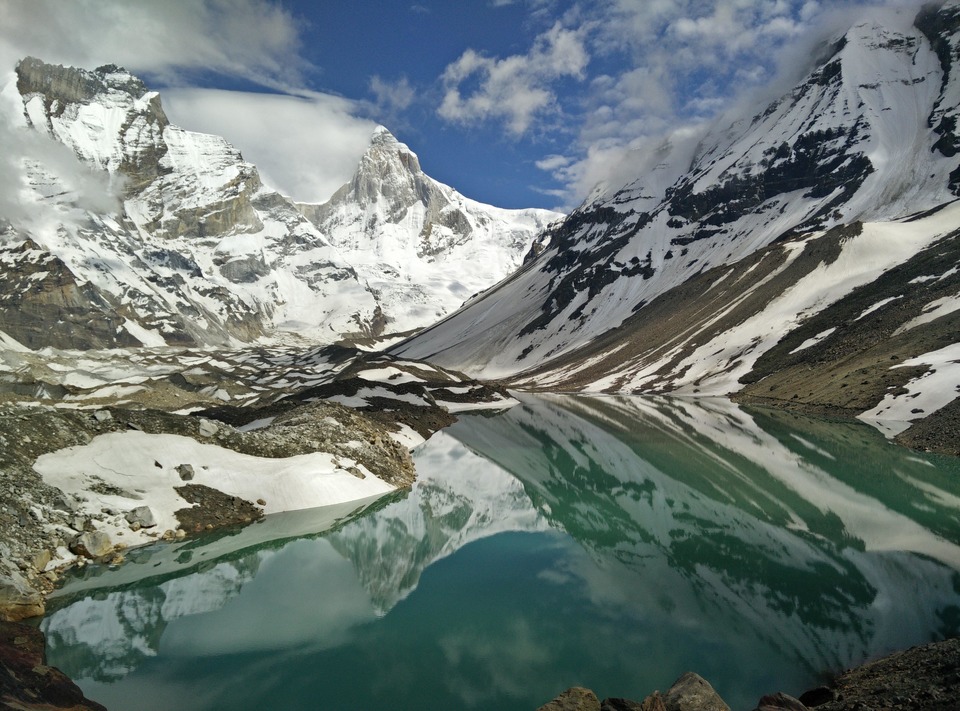 The Kedartal Trek has been known as one of the sought after treks present in India that provides the participants with a great view of the mountains. The trek is definitely not for the faint-hearted as it is difficult and only the people with great physical endurance are able to take part in the trek. The trekking trail takes people through some of the best pine forests that one can experience. It is also the trek that provides the trekkers with an opportunity to sight the bharals or the blue sheep. The moderate to difficult trekking trail makes it even more adventurous mostly for the youth who want to experience adrenalin rushing through their veins. The trek does last for 7 days on an average, so it is a great way to explore one’s need for adventure.

The Kedartal Lake is also known as ‘Shiva’s Lake’ which is a glacial lake present at the height of 15,580 ft. or 4,750 meters above the sea level. It is located in the Gharwal region of the Himalayas. The lake is mostly famous because it is the source of Kedar Ganga and it is mainly fed by the snowfall from the nearby peaks of Meru, Thalay Sagar and others present in its vicinity. Due to the belief of Hindu’s that Kedar Ganga originated from Shiva and fell on earth due to Bhagirath, this is a holy lake for the followers of Hinduism. The lake is present near Gangotri and every year several people trek to see its beauty. The descent is quite steep which makes it a difficult trek but it provides an exceptional view of the flora and fauna of the area. Kedartal trek difficulty is to be kept in mind while availing this trek.

How to reach Kedartal Lake?

The Kedartal trek Uttarkhand begins at the Gangotri base camp and on the first day, they need to trek till Bhoj Kharak which takes about 4 to 5 hours on an average. On the second day, they will trek till Kedar Kharak which again takes 5 hours on an average and a person needs to pass lofty terrains. On the third day, a 5-hour take finally helps a person to reach the Kedartal Lake where they get to make a stop and then they start the descent on the next day. Take help from a Kedartal trek route map to know more.

There are two best times for engaging in Kedartal trekking. The first one lasts from May to June which are summer months and the next one is from September to Mid-October which is the post-monsoon months. These months are the Kedartal Trek Best Time for the visit as the weather remains pleasant and one can have a clear view of their trekking trail. During the post-monsoon months, the place becomes heaven. The trek remains closed in the winters due to the difficult terrain, heavy snowfall and the sub-zero temperature which aren’t the perfect conditions for survival.

Kedartal Weather Round the Year

When someone is thinking of going on a trekking trip, they need to know about the weather that the place gets throughout the year. It helps to judge the situation and fix a plan accordingly. Kedartal Lake is present in a mountainous region, so it is obvious that it will get its share of chilly weather.

The monsoons aren’t preferred because it is difficult for a trekker to take the trail when it is raining constantly and they will also have a dull view of the mountains. It is also quite difficult for a car to even reach Gangotri.

The post- monsoons are moderately chillier as the Kedartal Weather will be looking forward to winters and the temperatures can dip to -9 degrees Celsius. The monsoons are harsh during the winters and the common dwellers leave the place as it receives extremely low temperatures that may even reach -16 degrees Celsius. It is forbidden to trek during this time due to the Kedartal altitude.

Is the Kedartal Trek safe?

It is advised for the trekkers to find a local guide or book their trek with a tourism company when they are thinking of participating in the Kedartal trek Uttarakhand. It is a difficult trek because of the lofty terrains that they will need to cover. The minimum age of participating in the trek is 12 years and a person needs to have the right level of physical fitness. To make the trek safer, it is advised to refrain from visiting the trail during the monsoon months and it is completely forbidden to visit the area during the harsh winters.

When someone is looking forward to a trek, it is important to assess the level of difficulty before participating in it. The Kedartal trek difficulty is regarded to have a level of moderate to high difficulty. It is definitely not for those who are about to trek for the first time. The lake is one of the highest glacial lakes present in Uttarakhand and to reach the lake one needs to pass difficult terrains. Trekkers will need to pass pine woodlands, high-elevation pastures, and sliding zones to finally reach Kedartal. When someone is venturing on the trek, they should pack according to the weather and also meet the different requirements.

Is the Kedartal trek recommended for beginners?

No, Kedartal trekking involves difficult terrains that can be hard to tread and one needs to climb more than 4750 meters above sea level. It is for the seasoned trekkers who have the experience of climbing in difficult situations. One needs to cover a total distance of about 70 KM on this trek. To decrease the difficulty, one should try to visit during the summer months as well as during the post-monsoon months. Keep the Kedartal altitude when planning for this trek.

A Quick Glance to Some of the Amazing Facts of Kedartal Lake Trek:

You can reach Haridwar and move on to Gangotri. The drive from Haridwar to Gangotri lasts for about 10 hours. Gangotri is the base camp for your travel, so you should take your time while you are in the hotel to get ready for the trek. A popular place of interest is the Gangotri temple. The distance from Hardiwar to Gangotri is about 289 Km in total. You can, of course, explore Gangotri which is 3,415 m above sea level. Delhi to Kedartal is a popular travel route among many people. Here, you need to get ready for the upcoming Kedartal Weather. This drive will take you to Gangotri, the base of starting with the Kedartal Trek. Gangotri is a scenic place and along with that it is a holy place for Hindu devotees and you will often get a crowd especially in the Char Dham journey during the months of May and June which are also Kedartal Trek Best Time. You start to feel the Kedartal altitude from here.

On the second day after having your breakfast, you will start on the trek to Bhoj Kharak which takes you to a height of 3,780 m above sea level and the total trek lasts for about 4 to 5 hours depending on the fitness. The trail lasts for about 8 KM. The trail is by the Kedar Ganga River and on the way, you will get to pass forests of Birch and Cedar. This is definitely a difficult trek and so, people need to prepare themselves for it. The scenic beauty of the trek is amazing as it provides you with a natural view of several waterfalls and the mountains. It provides an altitude gain of 932 M and you need to be ready to cross the rocky terrain. At Kedartal Trek Best Time this trek provides a marvellous view.

The trek begins when you cross the Bhagirathi River and you have to take a forest trail to start on your journey to reach Bhoj Kharak. The valley turns narrower along the way, so you need to be careful and you may notice breathlessness which is usual. The fir trees turn into birch trees. In the trek, you will also face the spider wall which only provides a narrow path that you need to tread carefully.

The camp is set in a flat stretch of land at Bhoj Kharak. While on the trek you need to have constant sips of water to keep yourself hydrated. Do take a Kedartal trek route map with you to have an idea about the trails.

The next day, you will start on the journey to Kedar Kharak which is at a height of 4,270 M above sea level. The Kedartal trek difficulty trail makes the trek of 4 Km last for about 5 hours to accomplish the trek. You will be exhausted by the end of it due to the terrain. The birch forests and the beautiful meadows make up for it and in the end, you get to camp on a meadow in the beautiful Kedar Kharak and have a nice hot meal.

The start of the Kedartal trek is through the Bhoj forest which leads to meadows that look amazing during the autumn months. On the way, you will find the Bhrigupanth which looks amazing. Along the way, you can be lucky to get a glimpse at blue sheep, goral, Himalayan Black bear, etc. A thin layer of frost can be experienced as you ascent the trail. Kedar Kharak is especially known for the sunset.

This trek takes you to the final destination, the Kedartal Lake. The altitude gain is of 4,750 m and this is the most difficult part of the trek and it lasts for about 8 hours as you need to go back to Kedar Kharak. The entire path is scattered with boulders which makes it a difficult trek and you should wear good shoes. After you reach Kedar Tal, our guide will take you to explore the Thalay Sagar Peak which is nearby. The place is away from the pollution of the city, so you will be amongst some of the most beautiful creations of nature. Camping at Kedar Kharak will be a lifetime experience to behold.

This part of the trek is mostly barren and the trek is quite strenuous. The weather can also be unpredictable at times. It is devoid of water sources, so you will need to carry your water, we recommend you to carry at least 2 litres. Cairns or small piles of rock point to the direction of the Tal or the lake. You can expect a freezing Kedartal Weather at the Kedar Tal Lake which has a beautiful emerald green hue. Kedartal trek route map helps you a lot during the trek.

The trek from Kedar Kharak to Bhoj Kharak will last for about 4 hours and you can enjoy camping at the Bhoj Kharak and explore the trails present nearby.

Day 6: Bhoj Kharak to Gangotri and drive back to Haridawar

Early next morning, you will need to start on your trek to Gangotri which was your base camp for Kedartal trek. It will take about 4 hours and a car will be waiting for you at Gangotri. It will take you to Haridwar. This is the end of our Kedartal trek itinerary.