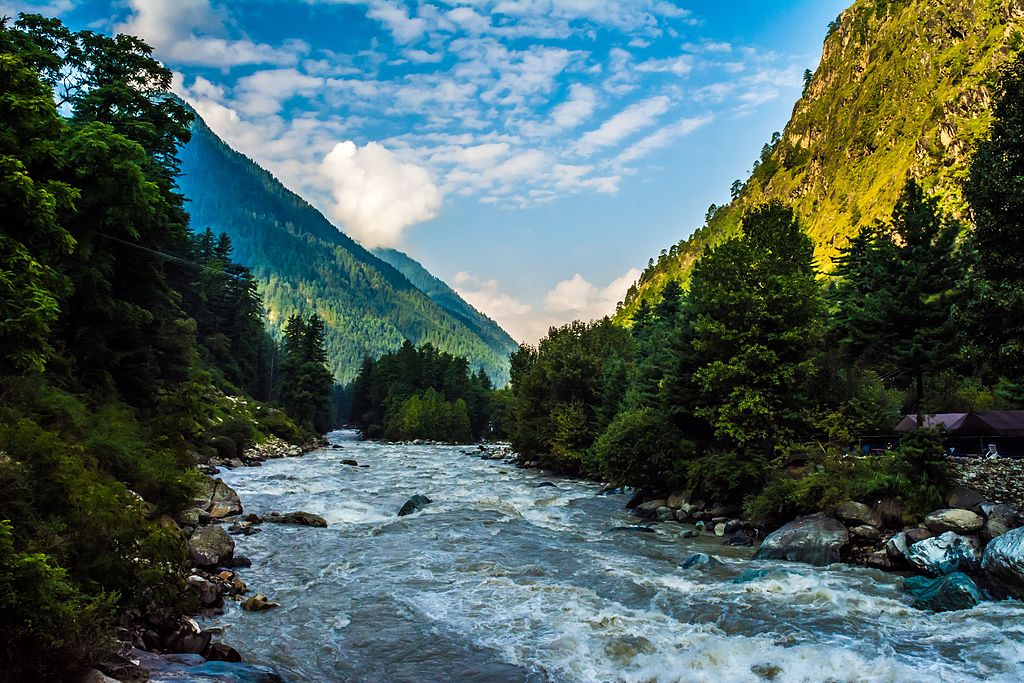 Are you seeking different roads for the fulfillment and happiness of your soul? If yes, then Kheerganga is your perfect destination. The adrenaline-filled Kheerganga trek enamours you with the vast bounty of nature and also kicks your spirit with adventurous offerings. The trek is snuggled in the laps of the quaint Parvati valley. It is one of the must-do treks that treats you to the hypnotic vista of Himachal Pradesh.

The trekking route of easy to moderate gradient offers you some real adventure which is different from the routine Himalayan treks. You tread on diverse terrains such as narrow trails running amidst the fields which suddenly open up to thickets of oaks and pines. As you journey through this alpine flora, there are bird chirpings and calls of jungle fowls that reverberate in the surroundings throughout.

Then there are rocky paths, vast meadows, and tricky ascents along the bubbly Parvati river that take you to the abode of Lord Shiva. The river-crossing over thunderous Parvati river and gushing nullahs is an experience that knocks you out of your wits. You swiftly maneuver on tree trunks lest you end up falling in the surging water below.

The beautiful trekking route is interspersed with plenty of Dhabas that serve lip-smacking food. There is no shortage of water as gushing waterfalls serve as an excellent source throughout the route.

In short, Kheerganga's short and crisp trail has all the integrants of a heady mountain rendezvous.

Note: Do not venture into various shortcuts along the way as these routes are infamous for being dangerous. We advise you to follow a proper route which is well-paved and buzzes with activity all through.

Some Quick Facts About Kheerganga Trek

Kheerganga trek is touted as one of the most refreshing treks of the Manali region. It is a beautiful place famous for hot sulphur springs surrounded by snow-capped mountains.

There is an ancient temple nearby to provide solace to your spiritual soul. Kheerganga is believed to be the abode of Lord Shiva, thus making it a spiritual site.

The mesmerizing Parvati Valley is one of the most beautiful locales of Himachal Pradesh. You revel in the enchanting beauty of this magnificent valley for two days. You explore the marvellous landscape of cascading waterfalls, stunning Himachal terrains, mystic hot springs, roaring rivers amidst the snow-capped peaks.

The scenic villages of Kalga and Pulga en route take you back in time. You get a chance to take a sneak peek into the primitive life of mountain people and explore their distinct Pahari culture.

Parvati Kund set amidst the most scenic natural environs is a must-visit. As you dip into the hot sulphur springs after a tiresome trek, your whole body undergoes a therapeutic overhaul. This natural jacuzzi at an astounding elevation of 13,000 feet is the most mesmerizing attraction of the wondrous Kheerganga trek.

The holy town of Manikaran is a famous pilgrimage centre for Hindus and Sikhs both. It has beautiful temples and the famous Manikaran Sahib Gurudwara. The hot sulphur springs of Manikaran are known for their healing properties. Do not miss the sumptuous Langar cooked in the hot springs. Kada Prasad is also offered to the devotees.

Camping under the star-lit night sky of Parvati Valley is the most heavenly experience. The dazzling skies are a treat to watch. One may end up staying awake the whole night to get the most of this scintillating view.

The offbeat town of Kasol is a mini-township in itself. It is just a 20-minute walk from Manikaran. Set amidst the most sylvan surroundings, this European style town is the hub of bustling activities and also offers a quiet reprieve to someone seeking blissful solitude. It is also known as Mini Israel because of the large number of Israeli tourists who visit here. Enjoy the Israeli cuisine at any of the cafes located in the charming village of Kasol. There are some cafes inside the quiet solitude of forests too. You can stroll alongside the effervescent Parvati and Beas rivers, which flow near this pretty Himalayan hamlet.

Kasol boasts of a local market that sells beautiful mountain stuff. Here you can buy souvenirs for family and friends, as a memento of this epic fiesta.

The Legend related to Kheerganga

According to the second legend, when Lord Shiva and Goddess Parvati visited this region, kheer appeared out of nowhere. Parvati Ji converted this kheer into water. The greyish color and milky complexion of the water is because of this.

The best time to visit Kheerganga is between April to June, and between September to November. The temperatures are moderate, and the valley is lush with a green aura all around. The air is salubrious and the weather at its pleasant best. Monsoon season should be avoided as rains make the region prone to landslides, and road blockages.

How to Reach Kheerganga

Joginder Railway Station is the nearest railhead. From here, one can take a taxi or cab to reach Kasol, which takes around 4 hours.

From Delhi, you can reach Kasol in 12 hours by car. The distance of 565 km. between Delhi and Kasol is well paved. The beautiful road journey is dotted with some amazing views and some good stopovers. Many state buses and Volvo buses from ISBT Delhi run between Delhi and Bhuntar.

From Chandigarh, it takes around 8 hours to reach Bhuntar. Once you reach Bhuntar, you board the bus to Manikaran and get down in between at Kasol.

Kullu Manali Airport, at Bhuntar, is the nearest airport to Kheerganga. It is 31 km away from Kasol. However, the availability of flights to Bhuntar is limited. Mohali Airport, at Chandigarh, is a more reliable option. It is located around 300 km away. Once you reach Bhuntar, you board the bus to Manikaran and get down in between at Kasol.

Weather and Temperature at Kheerganga

Summer Season (March to June)- This season is best to undertake the trek. The summer temperatures range from 13 to 37 degrees celsius. The weather is at its pleasant best and interspersed with sporadic rains. If lucky, you can even spot rare animals stopping over by the river bank for a drink. Kasol reverberates with energy during this time and hosts hordes of festivals to entice tourists.

Monsoon Season (July to September)- The monsoon temperatures range between 22 to 32 degrees celsius. Even though the region dances in green music and fresh air, undertaking this trek in the monsoon season is a risky proposition. The area is prone to landslides, road blockages and the trails become very slippery.

Winter (October to February)- The winter temperatures range between 3 to 10 degrees celsius. In January, the temperatures drop down to 0 to -4 degrees. The winter trek becomes difficult as many areas become inaccessible during this time.

There are no animal sightings and the air is thin, making hiking difficult. Despite the snow-covered panorama of the place, it is not recommended to undertake the trek during this season.

Kheerganga is a safe trek which can be undertaken by couples or even done alone. There are a lot of mountain villages and cafes on the trekking route, so you are never away from civilization for long.

Kheerganga is an easy to moderate level trek yet an adventurous one. One has to cross rocky terrains, meadows dotted with rare blooms, hot sulphur springs, pretty waterfalls in the beautiful Parvati Valley of Himachal Pradesh.

The moderate gradient of the Kheerganga trek entails that one has some fitness level and endurance to be able to maneuver through tricky trails. It is recommended to start preparing at least 2 weeks before you embark on this trek. Start with brisk walks, jogs, and cardiovascular exercises. The camaraderie, fun, and positive spirit are essential elements for this trek.

Today is an easy trek. You wake up in the beautiful Himalayan vista surrounded by the lofty peaks. You descend downhill and retrace the routes of the previous day, clicking pictures and reliving the memories of Day 1. After trekking a distance of12 km, you reach Barshaini. Take a bus or cab from here to reach the buzzing hamlet of Kasol.

You can stay in Kasol overnight in a hotel. Give a grand finale to your mountain odyssey by exploring this magical town.

Pickup and Drop from Kasol (Included in Package)