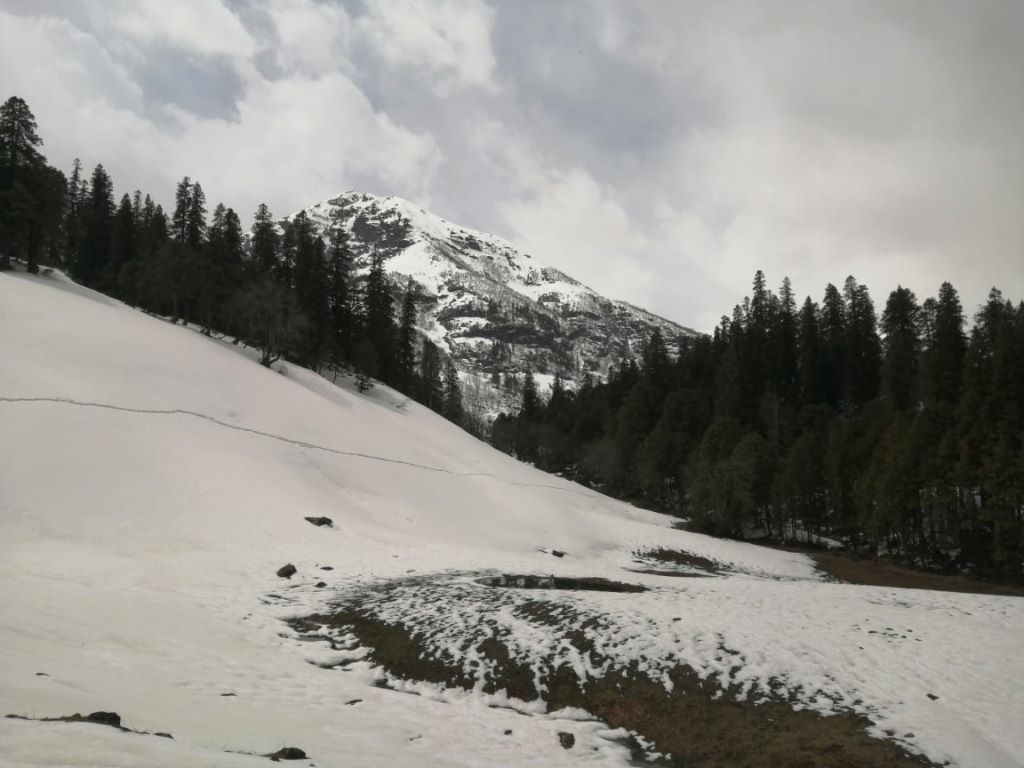 Himachal Pradesh, also known as, ‘the land of God’ is a mountain state located in the northern part of India. Extensive river systems, vast meadows, and high peaks are abundant in this snow-laden state. The biological diversity of Himachal is one of the best in the world. The economy of the state is mostly dependent on tourism and agriculture. Manali, Shimla, Dalhousie, and Kullu are some of the popular hill stations of Himachal Pradesh.

Manali is a small resort town in the Kullu district of Himachal Pradesh. Apart from being a gateway to Leh, Spiti, and Lahaul district, Manali is also quite popular among tourists. The Lamadugh is one of the best places to trek in Manali with minimum efforts. It is a two-days short trek in the Himalayas and is loved by trek enthusiasts. Lamadugh is ideal for any trekker who has a time restraint but likes to trek. The scenic beauty of this trek is unparalleled, and it acts as an escape from the crowded town.

The air is pure at Lamadugh and the pretty wildflowers make the camping experience even better. The trek does not have any special fitness requirement which makes it suitable for beginners as well. Manu Temple in Old Manali is the starting point of the trek and the trail boasts of picturesque views throughout. The trekking experience includes passing through beautiful landscapes of meadows, and dense forests of cedar, pine, deodar, and maple trees. Many snow-capped peaks can be seen during the journey.

The route of the trek is blessed with a panoramic view of Bara Singhi Glacier, and the peaks of Deo Tibba and Indrasan. At the endpoint of the trek, flowery meadows cover the area.

QUICK FACTS ABOUT THE LAMADUGH TREK

HIGHLIGHTS OF THE TREK

The Lamadugh trek comes with a spectacular view of nature. The trail passes through thick forests of pine, deodar, and cedar. The trek offers views of the mesmerizing hill-station of Manali. Hanuman Tibba, Deo Tibba, Manalsu glacier, Rohtang Pass, Pirpanjal and Dhauladhar range can also be seen en-route. You can also visit the Hadimba temple.

HOW TO REACH LAMADUGH TREK

The base location of Lamadugh Trek is Manali.

The Bhuntar Airport is the nearest airport. It is located at a distance of 50 km from Manali and 10km from Kullu. There are limited flights from Delhi to Kullu which are operated by few airlines. However, the prices of the tickets are quite high and the services provided are irregular.

The nearest railway station to Manali is the Jogindernagar railway station. This railhead connects various major cities to the beautiful hill station of Manali. The other available options by rail include getting off at the Chandigarh or Ambala Cantt station.

Both private and government-run buses travel to and fro from Manali. You can choose from HPTDC and HRTC buses, or semi- sleeper AC Volvo buses. The views of surrounding mountains and valleys accompany throughout the journey. The buses to Manali start from the ISBT Kashmiri Gate in Delhi and takes approximately 12-14 hours to cover the distance. If you prefer privacy and more comfort, you can travel by private or rented cars.

The best time to visit Lamadugh is in between May to October. The weather is pleasant and the surroundings are filled with lush greenery during summers. The cool breeze gets balanced by the sunlight. The flowers also bloom the best during this season. A large variety of birds can also be seen. In winters, Lamadugh is extremely cold and covered with snow.

IS THE LAMADUGH TREK EASY?

The Lamadugh Trek is the easiest and the shortest trek from Manali. It is an ideal trek for beginners as well as for moderate trekkers. Only a basic level of fitness is required for this trek. The trail is an easy ascent with very less steep patches.

Report at Manu Temple in the morning in Old Manali. We start the trek and ascend towards Lamadugh. The trail is slightly steep and we pass through dense forests of pine, deodar, and cedar. There is no source of water after Manali. Glimpses of the beautiful resort town of Manali located on the left bank of Beas river and the Kullu valley can be seen during the climb. After further ascend, the views of Deo Tibba, Indrasan, and Bara Sigri glacier become clearer. The greenery of the plateau is surrounded by snow-laden peaks.

You can explore various places in Old Manali on the second day. Manu Temple, Vashisth Hot Springs, Solang Valley, Jogini Falls, Mall Road, Kasol, Manikaran, and Hadimba Temple are some of the places which are popular among tourists. Manali also offers a number of adventure sports such as white water rafting, paragliding, trout fishing, rock climbing, river crossing, and rappelling. The buses start after 4:00 pm from Manali, so you can choose the places of attraction accordingly.