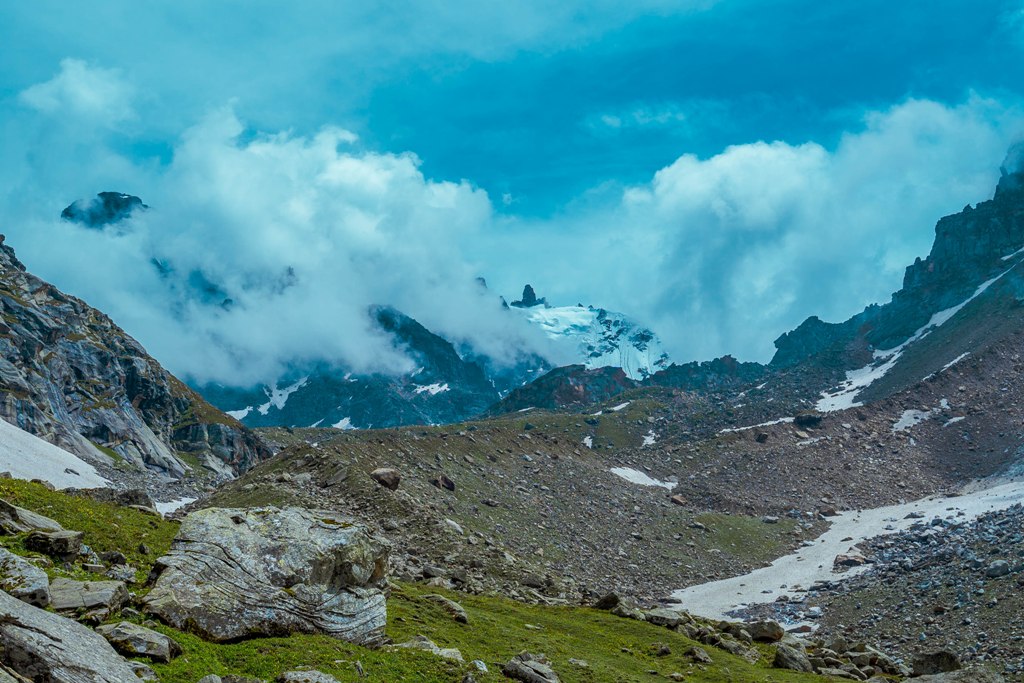 Heaven is a myth but Himachal is real, it’s Himachal calling! The state of Himachal Pradesh is God’s blessing to mankind. The magic of the colonial era still emanates from each nook and corner of the place. Winding roads, narrow passes, ancient towns, unique architecture, old monasteries, and towering mountains draw hordes of trekkers all around the year.

Patalsu Peak trek is one of the most sought-after gems of Himachal Pradesh that offers the best summit experience to beginners, amateurs as well as seasoned trekkers. As one of the most wholesome trekking routes of Himachal Pradesh, it is gaining popularity because of the diverse experiences it offers to trekkers before bringing them to the climax of the trek, the soaring Patalsu Peak at 13,846 feet. The trek traverses a circuitous route, commencing and ending at Solang Valley, a beautiful valley cradled in the laps of Manali.

Nestled in the close proximity of the magnificent Kullu Valley, Patalsu Peak lies at a staggering altitude of 13,846 feet. One of the safest trekking routes of Himachal Pradesh, Patalsu Peak Trek takes you through assorted terrains of moderate trails, steep inclines, narrow ridges, and moraines to bring you to Patalsu Peak, a prodigious summit watching over Manali.

The summit offers a 360-degree view of an amazing Himalayan canvas with snow-clad mountains kissing the azure skies.

This trek of moderate gradient journeys through lush meadows, dense forests of alpine which are home to exotic mountain birds, and levelled trails lined with evergreen trees that pave way for slightly uneven rugged terrain towards the end of the trek.

You witness the grandeur of Solang Valley, hushed Himalayan hamlets flanked by fresh mountain streams, thickets of alpine fauna and magnificence of grandiose peaks all along the trek.

A quick glimpse into some focal points of Patalsu Peak

Highlights of the Patalsu Trek

Proximity to Kullu and Manali- Soak in the picturesque ambiance of Manali, at a height of 6,726 feet, marvel in the beauty of impressive skyline with soaring mountains of Hanuman Tibba, Ladakhi Peak, Manali Peak and Friendship Peak gaping at you from close quarters. Exploring this European style town set amidst nature’s bounty is an absolute delight.

Exploring Solang Valley- Solang Valley is an adventurer's paradise. You can indulge in the thrill of paragliding, parachuting, zorbing, rappelling, horse riding, rock climbing, skiing, mountaineering, trekking or simply go hiking into the beauteous environs of the valley. Bird lovers can engage in bird watching as the region is home to a myriad variety of avian species. Seek blessings of Lord Shiva by visiting Anjani Mahadev temple which holds special significance to the locals.

Witnessing the distinct Himachali culture- Solang Village is a tiny hamlet where you can experience the local village lifestyle and distinct Himalayan culture. The village surrounded by gorgeous Himalayan peaks has traditional wooden houses with unique architecture. Explore the village and know the culture, traditions & day-to-day joys of the local populace- it will take you away from the hum-drums of chaotic city life.

Unparalleled view of Himalayan giants- The summit, Patalsu Peak is nestled strategically on the spine between the Kullu and Lahaul Valleys. It offers mesmeric views of Lahaul’s rugged landscape and lofty mountains, and also of snow-capped Himalayan giants. The beauty is opulent and paradisiacal.

How to reach Patalsu Peak

Manali is well-connected to Delhi, Pathankot, Mumbai, Kolkata and other major cities of India via road. One can either reach Manali by State Transport buses, Deluxe buses, or Volvo buses.

You can reach Manali by flight as well as Bhuntar Airport serves as its nearest airport. There are regular flights available to Bhuntar Airport from all the major cities of India. On reaching, you can opt for taxi or car services that are available from the airport to Manali and will cost about INR 700 - 1000.

Summer and Fall seasons are the best to embark on Patalsu Peak Trek. Summer months of April to June and the fall months of September and October are the most ideal because of clear skies, salubrious mountain air and lush landscapes. The weather is pleasant enough to enjoy the beautiful trek. The trails are easy to navigate as there is either very little or no snow.

November becomes a little cold and one may experience heavy bouts of snowfall during this month.

Monsoon months should be avoided because the region receives heavy rainfall making the trails slippery and the region prone to landslides.

If you are seeking a winter bliss in the lap of mountains and are game for some adventure then you can venture during the winter months of December to March. However, the region witnesses luxurious snowfall and is bitter cold. You require careful maneuvers on ice-patches to reach the snowy summit. The expanse of white glittering with the pristine beauty of colossal mountain peaks is a sight to behold.

You can enjoy winter sports in the Solang Valley which buzzes with skiing activities during the winter months.

Patalsu Peak Trek falls in the moderate difficulty trek gradient. It is a heady mix of even trails, rugged terrains, steep ascents, narrow ridges, and moraines.

This makes it easy for beginners and amateur trekkers to undertake this trek. It offers a perfect start to novice trekkers aiming to gain experience so that they adapt themselves well to subtle innuendos of trekking.

However, it does require perfect mental and physical fitness.

Patalsu Peak Trek takes you to a soaring height of 13,846 feet. The oxygen levels are thin at such a staggering altitude thus requiring you to have good physical and mental endurance. Even though this trek is of the moderately difficult gradient, there are some challenging stretches that require very careful maneuvers. Also, you gain an altitude of around 6,000 feet in 2 days which requires quick acclimatization. This entails that you have an extremely good level of physical fitness.

It is recommended that you prepare for the trek at least 4 weeks in advance by jogging, running, cycling, swimming and doing crunches.

Patalsu Peak Trek is one of the safest treks as it does not take you away from civilization for too long. Also, the trekking route is peppered with checkpoints for the safety of trekkers.

Day 1: Arrival at Manali, Drive to Solang Valley and Trek to Solang Village

After arrival at Manali, you drive to Solang Valley. Once at Solang Valley, you trek to Solang Village, your destination of the day. You can enjoy the adventure sports of paragliding, parachuting, zorbing, rappelling or skiing at this picturesque mountain village.

A visit to Anjani Mahadev, the small yet revered Shiva Temple, makes for the spiritual bliss just before you embark on actual trekking the following day. It is an important pilgrimage site with a gushing waterfall that freezes to form a 100 ft (3m) tall natural Shiva Lingam during winters.

Overnight camping in Solang Village in the pretty campsite by the banks of Beas river.

The trek of moderate ascent commences from Solang Village along the bubbly Beas river. You trek through the thick woods of pines, walnut, chestnut, maple and silver oaks which inhabit exotic birds of Himachal Pradesh. Moving along the hiking trail, you experience a heavenly bliss listening to the mellifluous singing of pheasants like Khaleej and monals. The dense woods open to a vast rolling meadow of Shagadugh, your stay for the night.

Overnight camping in camps at Shagadugh, a scenic campsite.

You start early from Shagadugh to reach Patalsu Peak as it is a long trek today. Just after the meadow ends, you hit the trekking trail that goes to an uphill hike through lush forests. The trek of steep ascent through winding trails and a rocky ridge brings you to Patalsu Peak where you are treated to awe-inspiring views of Hanuman Tibba, Deo Tibba, Mount Indrasen, Mount Shitidar, Friendship Peak and Manali Peak. You can capture this splendid view in your lens and spend some time at the summit before descending back to Shagadugh.

Overnight stay in camps at Shagadugh.

Day 4: Trek from Shagadugh to Solang Village, drive to Manali

You retrace the steps of Day 1 as you take an easy descent from Shagadugh to reach Solang Valley in 3 hours. You can enjoy the various activities at Solang valley, or take a jeep ride from Solang Valley to Manali or Kullu. You can explore the beautiful mountain town Manali- stroll in the bazaar, enjoy the distinct delicacy-Yak Cheese, unwind in the rustic eateries of European style ambiance, or simply laze around inhaling the fresh mountain air.

If wanting to explore Kullu, there are ancient temples to visit, shopping bazaars to indulge in retail therapy, and scenic trails for hiking.