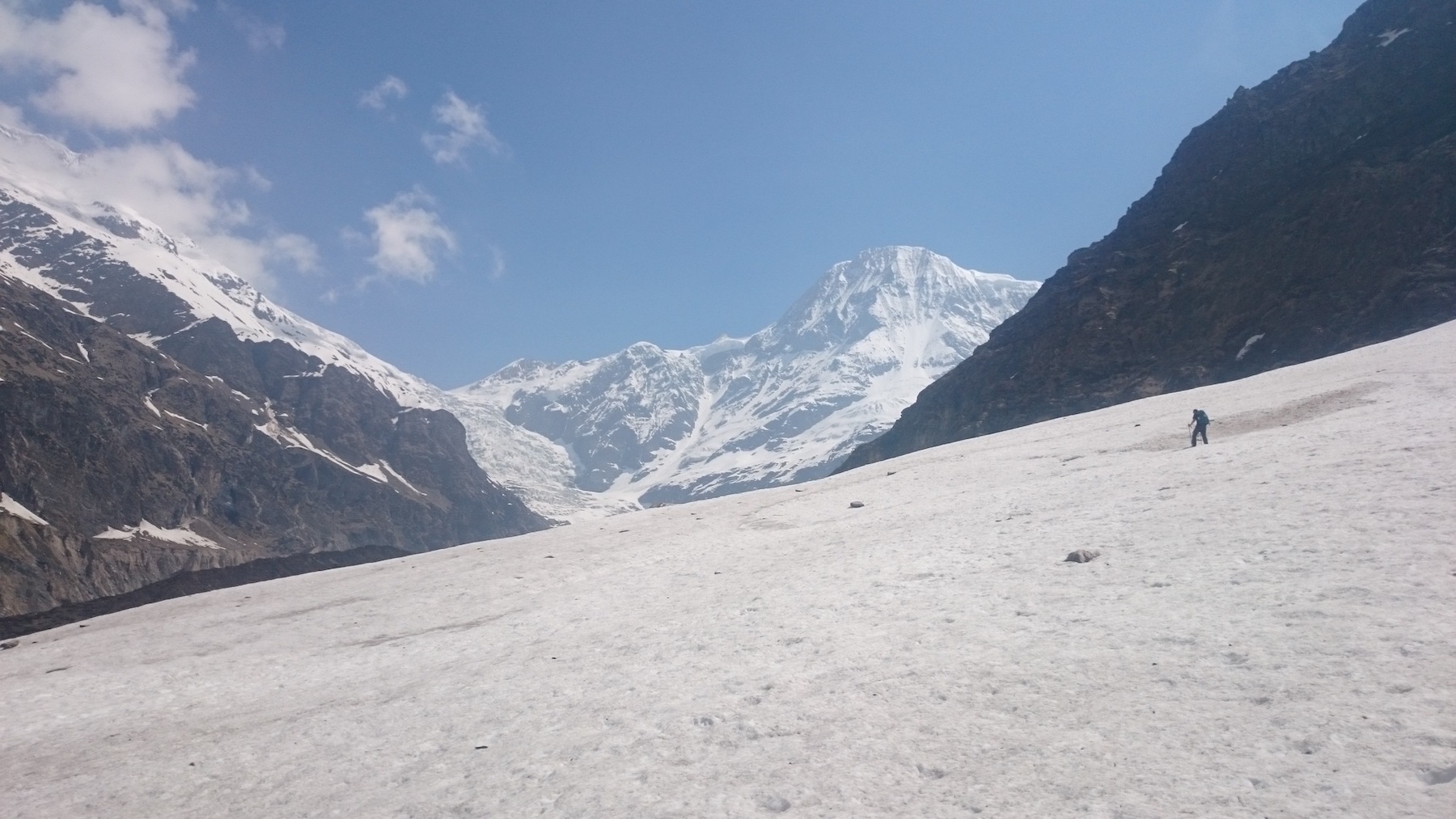 Ready for a trekking adventure in the upper reaches of the Kumaon Himalayas? If you are a guy enriched with endeavor and commitment, then, Pindari Glacier trek seems to suit your persona! To the southeast of Nanda Devi, Nanda Kot lies the Pindari Glacier. The glacier flows to the south for a short distance of about 3 km and eventually, gives rise to the Pindari River which meets the Alakananda at Karnaprayag in the Garhwal district. The trail towards the Pindari glacier crosses the villages of Saung, Loharkhet, followed by crossing over Dhakuri Pass, which is continued onto Khati village (the last inhabited village on the trail), Dwali, Phurkia and finally terminated at the Zero Point, Pindar. Though most of the trail is along with the Pindari River, for most of the time until after Khati the river seems mostly hidden. Apart from the trek, Pindari Glacier is also famous for other adventure sports like ice climbing and mountain biking. Pindari Glacier trek is pretty enough to pursuit each travelers heart and soul. The Pindari glacier owes its existence to the vast quantities of snow that precipitates from surrounding summits of the Greater Himalayan range. It is often referred to as the ?Soul of Kumaon? by the locals.

The Pindari Glacier Trek initiates from Loharkhet at 1,760 meters and heads to Dhakuri at 2,680 meters, which is a trail of around 10 kilometers. From Dhakuri, the further track leads to Khati which is located at an altitude of 2,210 meters passing through a vast forest, from where its paces along the River Pindar to Dwali at 2,575 meters. The route onwards, at Dwali splits to Phurkia and heads up to Pindari Glacier, which is the Zero Point. The beauty of this place is further enhanced by the presence of a beautiful waterfall just before Phurkia where you can rest for a while. The trek downhill from the Zero Point to Loharkhet follows the same trekking route passing through villages, meadows, and forests.

The trek starts from Kathgodham Railway Station as we start our journey to Loharkhet in a shared vehicle. It is a 180 km drive which will take around 7-8 hours. You will be having your breakfast and lunch on the way to Loharkhet. At Loharkhet your dinner and stay will be in a guest house.

At an elevation of 1,760mts above sea level is located Loharkhet. The route for today will be covered partly, a 3-hour drive and an hour long trek. We will take a vehicle all the way to Kahrkia and than trek for approx an hour to Khati. Majestic Peaks such as Nandabaner, Nandakot, and Laspadhura are visible from Khati. The stay for tonight will be in tents.

During the trek towards Pindari Glacier, Khati is the biggest human settlement that one would come across. At an altitude of 2210m, lies the Khati village which is situated on the banks of Pindar Ganga River. Embedded in the trail lies the element of a thick forest of Rhododendrons. From here, one can also have the view of some stunning peaks, namely, Nandabaner (6,236 m), Nandakot (6,861 m) and Laspadhura (5,913 m). Day 3 targets the trail towards Dwali, which is a trek of around 11 km. The trail towards Dwali goes along with Pindar River along with two wooden bridges to cross. Along the way, one may also witness many waterfalls.

The element of the trail for day four is quite cheerful. The gradient of the trek from Dwali to Phurkia is steep and at a moderate level. The waterfall present just before Phurkia is an increment to the incredible experience one gains on his/ her visit to Phurkia. Phurkia is considered to be a picturesque place blessed with natural beauteousness. Also, are present few small Dhabhas which run during the season where one can have Maggi and tea. Phurkia is situated at an elevation of 3,250mts above sea level.

The trail for day five is quite lengthy, so, starting early is advised. Throughout the trail, embedded in the panoramic views, on left is the glance of Mt Baljuri, Mt Panwali Dwar. Zero point is the point from where the Snout of Pindari Glacier is visible and it is situated at an astounding elevation of 3,660mts above sea level. After exploring the praiseworthy beauty of Pindari Glacier trek back to Phurkia.

Day six includes trekking back to Khati and over there, sharing your experiences with hospitable villagers. The element of descending back is quite impressive because of the surrounding atmosphere which has got purity integrated into it.

The trek for the seventh day is of an easy gradient. Although, being a long trek consuming around five hours, this element of the trail is quite interesting because of the stunning views of the environment including a glimpse of the beautiful Mt Maiktoli. The last day of the trip constitutes a long drive back to Kathgodam.