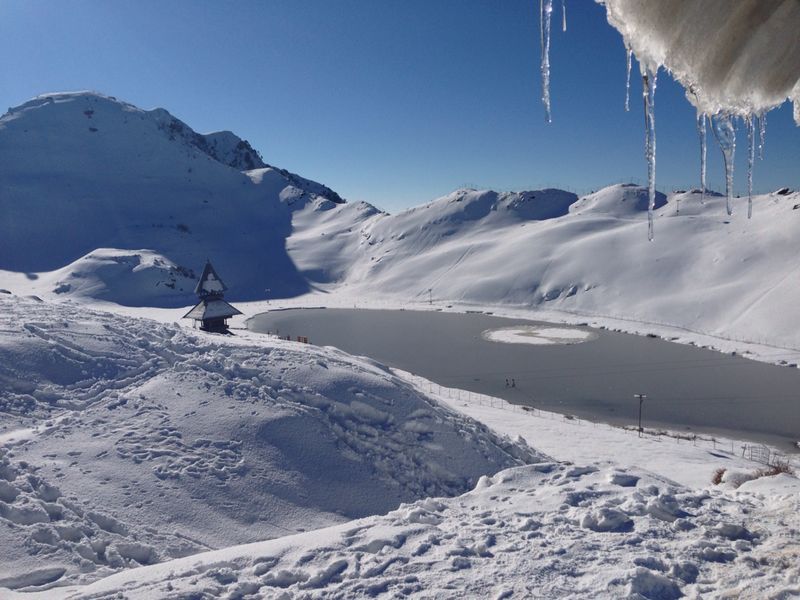 Prashar Lake is the hidden gem of Himachal Pradesh, which is nestled in Mandi district, this magnificent lake is surrounded by Dhauladhar ranges. Prashar lake trek is 2 days trek, which makes it a perfect weekend getaway. The idea of spending the weekend in tranquil mountains, in front of a divine blue lake, and witnessing the beautiful vistas sounds quite attractive. We all are so busy in our lives that we do not get enough time to plan a trip but this short trek gives us an opportunity to discover the magnificent beauty of our mother nature away from the crowd and noise of the cities. This short trek is worth your time and money.

Prashar lake is situated at an altitude of 8,900ft this trek offers the 180-degrees view of Dhauldhar, Pir Panjaland, Kinnaur mountain ranges. One of the best things about Prashar lake trek is that it can be done throughout the year, there is no particular season or month in which you should go or should not go. An awe-inspiring landscape surrounded by snow-peaked mountains and a lake with deep blue water, which is like huge sapphire lying in the middle of the valley and a floating island on the surface of the lake, which has no fixed place, as it keeps changing its position. The night sky of this trek will make your journey much more meaningful. There is a pagoda-like temple near the lake, which is dedicated to the sage Prashar. It is said that the temple was built in the thirteenth century and has many mythical stories related to it.

Prashar Lake is a sacred lake according to Hindu mythology because sage Prashar meditated on the bank of this lake. Bhima the strongest among the Pandavas created this lake. The legend says when the Pandavas were returning from the Mahabharat war with Lord Kamrunag, when they arrived Lord Kamrung loved the view and tranquility of this place and decided to live here for the rest of his life. Therefore, Bheema rammed his elbow creating a huge dent, which became the lake. The interesting fact about the lake is that no one knows how deep the lake is.

You should not miss the sunrise, as it will be absolutely picturesque scenery, which will never fade away from your memory. The Prashar Lake trek trail goes through the village, which gives us the chance to enjoy the local culture of the place. The trail of this trek is rated from easy to moderate. It is suitable for beginners; this is a perfect camping destination for families with children. The trek starts from Panarsa and ends in Panarsa. The total trekking distance is almost 15km.

Prashar Lake is located on high altitude, and because of this, the weather remains cold throughout the year, but sometimes weather can be unpredictable. With the change in season, the weather also changes drastically. During winter, the area is covered with a white sheet of snow. In summers from April to June, the weather remains pleasant and in monsoon from July to August, there is moderate to heavy rainfall. Since this trek can be done throughout, the year you can choose the weather accordingly.

This trek can be done throughout the year; it depends on which season or weather you prefer. From April to mid-June the weather is quite pleasant, everything is clear and green. The temperature stays almost 16-25 degrees Celsius.

But if you are someone who loves snow then December and January would be the best time as the lake remains partial freeze and the trek is covered with snow, the temperature sometimes drops below zero degrees Celsius. In January, you can also witness snowfall.

How to reach Prashar lake

This route is perfect for trekking and the condition of roads remains good throughout the year. There are many direct buses from Delhi to Panarsa. Through this route, you do not need to change buses frequently.

There are three ways to reach Panarsa.

The nearest airport to Panarsa is Bhuntar. From the Airport, you can take a cab/taxi or bus to reach Panarsa.

Well, there is no direct train to Panarsa from Delhi. However, there are three nearest railway stations Kalka, Pathankot, and Ropar.

There are plenty of trains from Delhi to Kalka such as Shatabdi.

Reaching Panarsa by bus is more simple and advisable. You can find direct buses from Delhi to Bhuntar, and the same bus will go through Panarsa, which is 10km before Bhuntar. There are multiple types of buses available like AC and semi-sleeper. You can take a private or government bus. Government buses like HRTC or HPTDC are safer than private buses.

On the bus from Delhi to Bhuntar, you must inform the conductor to drop you off at Panarsa bus stop, because buses usually don’t halt at Panarsa.

You can also reach Panarsa through the Mandi district. Take HRTC from Delhi to Mandi. From Mandi bus stop, take a bus to Panarsa.

Reach Panarsa early morning, check-inn into a Home Stay where you can rest for a while and enjoy your delicious breakfast while experiencing the beautiful sight of mountains from your homestay. After relaxing for a few hours, put on your trekking shoes get your bag filled with essential trekking materials. As you will be camping at night, so make sure to take extra woolens and shoes because the weather in the hills is unpredictable, and the temperature drops drastically at night in the hills. From Panarsa we will be heading towards Jwalapur village in cab/taxi. It will be a 25km drive with scenery so beautiful that your eyes will be glued to the window. Jwalapur is a small and quaint village; there you will see numbers of apple orchards lined up on the roads. The village is the starting point of the trek.

The trail to Prashar Lake is slippery, steep, short and full of adventure. On your journey to Prashar Lake, you will pass through densely Himalayan forest and will see the small sparkling stream. The deeper you will go in the woods the quieter it will get, and you will experience the tranquility of the forest. The trek begins from the plain but after 15 minutes, the trail will divert from plain to moderately steep climbing. Then to your surprise, the trail will open up into a beautiful meadow. Where you will witness the stunning scenery of snow-capped mountains and beautiful vistas along with the sight of the neighing of ponies and bleating sheep. After 4-5 hours of journey, you will reach the lake. The lake is protected by a fence, but there is plenty of space outside the fence, where you can set up your camp and have a bonfire and spend the night under a starry sky. After reaching the lake you will have enough time to visit the beautiful temple, you can visit the temple either in the evening or the next morning.

Wake up early to see the beautiful sun rising from behind the snow-capped mountains in the chilly morning. Later take a walk around the lake and experience the calmness of the mountain. After spending some time near a lake in the mountains, you will trek back to Jwalapur village where a cab/taxi will be waiting for you to drive back Panarsa. Rest for while in your homestay, eat your delicious lunch, prepare to hop on the bus back to Delhi.