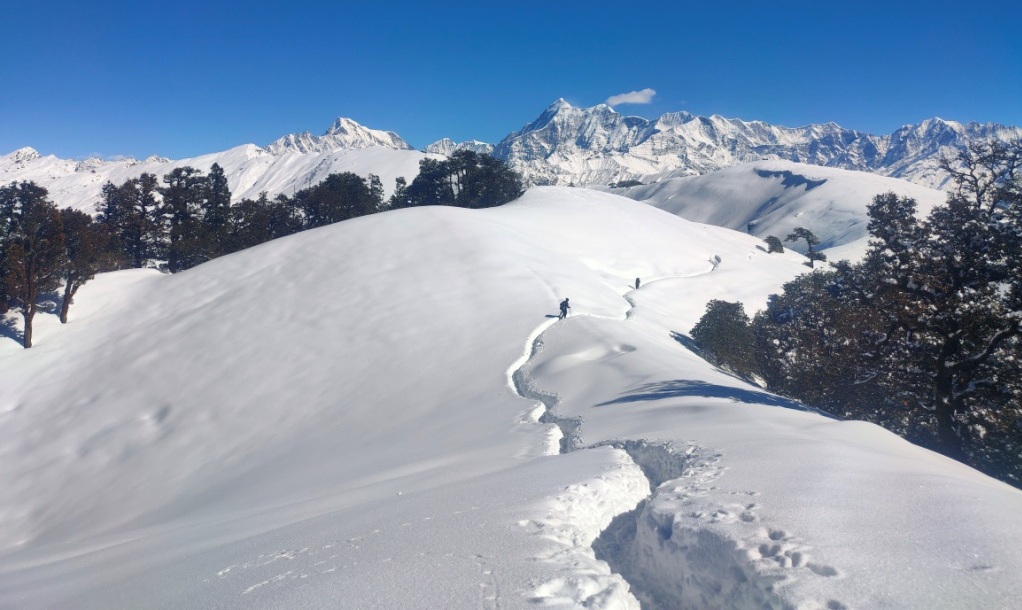 May to September, except July

The holidays, vacations provide a chance for an escape into the wondrous Himalayan mountain ranges, free from the city-life hassles and groveling monotonous everyday routines. Trekking peaks in Himachal onto the narrow winding paths of the crisp, snow-clad mountains can be the best way to spend your vacation. Trekking peaks in Himachal is taken up as a passion by many enthusiastic trekkers. Amongst many trekking points in Himachal, the Friendship Peak in Kullu, perched at an elevation of 5289m, is widely regarded as the trekker’s paradise.

Friendship Peak Expedition offers a high altitude trek, which traverses through rocky and tricky terrain leading to the snow-capped peak. It is known for its alluring meadows and the dense alpine forests. It is situated near the Beas Kund area in the majestic Pir Panjal range in the humble Kullu district of Himachal Pradesh. The easiest access to the Friendship Peak is through Dhundi and Beas Kund itself. It provides travelers a mesmerising view of the three beautiful ranges namely: The Great Himalayan Ranges, the Pir Panjal Ranges, and the Dhauladhar Ranges. The Friendship Peak in Kullu is termed as an alluring nature’s abode of heaven. The Friendship Peak is surrounded by several other peaks like the Hanuman Tibba (5490m), Shetidhar (5250m), Deo Tibba (6001m), Makar Beh (6070m), and Shikar Beh (6200m). The Friendship Peak altitude stands tall at a level of 17,348ft above the sea level. The Friendship Peak trek distance is calculated to be a 34 km long trek from Solang valley.

The Friendship Peak Kullu requires a prior knowledge about mountaineering and trekking. Mt Friendship Expedition is quite a challenging trek which also requires you to be well accustomed to trekking at high altitudes in unpredictable weather conditions.

The Friendship Peak trek starts off from the oft-visited Solang Nala valley. The distance from Manali to Friendship Peak, trekking is mostly done on foot. You can only take a cab from Manali till Solang valley from where you have to undergo an onerous trek to Friendship Peak. It will take 7 days to cover the 34 km long Friendship trek distance. Climbing Friendship Peak offers a celestial experience to all its trekkers. It courses through beautiful grasslands, lush green forests replete with alpine trees and orchards connected by several, narrow, bubbling streams. One may also go speechless looking at the spectacular panoramic view of the moraines, glaciers, crevasses, which form the most important features of the Friendship Peak Trek. The major attractions on the way to the Friendship Peak trek are the Hidimba Temple in Manali, hot water springs of Vashist, and Naggar Roerich Art Gallery.

Some Quick Facts About The Friendship Peak Kullu

How To Reach Friendship Peak?

Manali, being one of the most popular hill stations is an extremely motorable area. It has wide road connectivity with the landmark cities like Delhi, Ambala, Chandigarh, and Shimla. You can book a comfortable Volvo bus from Delhi to Manali which will take about 12 to 13 hours to reach. The distance from Delhi to Manali is 529.6 km via NH 44 and the bus fare starts from INR 1400 and can shoot up to INR 1800 to INR 1900 depending upon the season along with the luxury and comfort desired.

The distance between Manali and the beautiful Solang valley is 14 km which takes about 30 to 40 minutes to reach. You can either book a cab or take a taxi to Solang valley from Manali which will cost you around INR 2000 to INR 2500.

The distance from Chandigarh to Manali via NH154 is 288 km which will take you by bus around 8 to 9 hours to reach. The bus fare ranges from INR 900 to INR 1000. You can also book a taxi to Mandi from Chandigarh and then again take a bus to Manali. This will take about 6 hours to reach and is regarded as the fastest route but a costlier one. The cab fare from Chandigarh to Mandi ranges from INR 3000 to INR 3500 and the bus fare from Mandi to Manali starts from INR 700 onwards. Then from Manali, take a taxi to Solang valley from where the trek commences.

There is no direct train available from Delhi to Manali. You have to reach Kalka railway station from Delhi and thereafter take a taxi to Manali. You can board Kalka Shatabdi Express (12005) which runs on all the days in a week from New Delhi. It departs at 17:15 pm from Delhi and reaches Kalka at 21:20 pm. The CC class fare is INR 570 per head and the EC class fare is INR 1180 per head. Then you can take a taxi from Kalka to Manali, covering a distance of about 278 km via NH154. You will reach Manali within 8 to 9 hours approximately. The taxi fare starts from INR 5000. Then from Manali, you have to take a taxi again to Solang valley.

From Chandigarh, you can take a train to Rupnagar which is just an hour’s journey. Then from Rupnagar, you will have to take a cab to Joginder Nagar railway station, which is the closest railhead to Manali. It will take around 6 hours to reach and the taxi fare starts from INR 4500 onwards. Then again, take a taxi from Joginder Nagar railway station to Manali which will another 4 to 5 hours to reach. It will cost you another INR 2800. From Manali, you need to book a cab again to Solang valley as mentioned above.

The temperature during August to October is between 12 degrees Celsius to 18 degrees Celsius and at night -6 degrees Celsius to 4 degrees Celsius. Trekking boots, Trekking poles, pants, and heavy woolen garments are an absolute must for this Friendship Peak weather. The month of July is not recommended due to dangerous avalanches. The winter season is extremely unsuitable because the heavy chunks of snow block the paths making the Peak inaccessible to the trekkers. Embark on this trek expedition during the Friendship Peak best time and reward yourself with a heaven on earth.

The Friendship peak trek expedition is not an easy trek and is deemed in fact a challenging one too. It is mostly for passionate and experienced trekkers. Amateur trekkers may find the expedition quite burdensome. Climbing Friendship Peak requires patience, sheer endurance, good fitness level, and proper guidance.

The trekkers need to be properly acclimatized with the vagaries of the mountain weather and climate. It is a high altitude trek, so one must venture into this adventure accordingly. The Friendship Peak altitude is considered to be one of the highest ones in the Himalayan Ranges. Tourists, climbing Friendship Peak should not have breathing problems or any troubles related to asthma. If the trekkers fail to cope up with the Friendship Peak altitude, then a number of complications may occur in the health conditions of the trekkers. Ropes and crampons are an absolute necessity for this trek due to the Friendship Peak height to negotiate the steep slopes, rugged ridges, and perilous crevasses dotting the route to the top. The trek guides always have a hunch over the perils lurking ahead of us during the treks and have enough experience regarding the precautions to be taken in worst-case scenarios.

You have to reach Manali from Delhi either by bus or train. You can also take a flight from Delhi to Bhutnar, the nearest airport to Manali. Spend the day in Manali. The Mall road and the Hidimba Temple are enlisted as the major attractions of Manali. After freshening up, visit these places and feel blessed to be a part of this stellar journey. Stay overnight in a hotel and prepare yourself for, Manali to Friendship Peak trekking.

After the journey from Delhi, take some rest and recoup in the lap of the Manali Mountains. You can take a cab to Solang Nala from Manali. Solang Nala is basically a common juncture from where numerous treks in Himachal Pradesh commence.

The Friendship Peak trek starts off from Dhundi and you have to walk the distance from Solang Nala to Dhundi. The trekking trail will keep you entertained with the lush green pasturelands, the wide-canopied alpine forests, and the gushing streams of Beas. Today’s trekking trail from Dhundi to Bakarthach is a moderate one. The Pir Panjal Range and the Dhauladar Range are visible from this point. This part of the trek ends at a camp in Bakarthach.

Today’s journey includes the trek from Bakarthach to the Beas Kund Camp. Today’s trek will take about 4 hours to reach. This terrain is quite a difficult one. The trail enlists rocky platforms and it is quite a steep ascend to the top of the Beas Kund Camp. This tranquil spot is perfect for repose and meditation. The enthralling views of the dense forests and the snowy mountains will keep you entertained throughout the route to the trek. After reaching the camp, take rest, have your meals, and delve into the blissful scenario of nature.

Mt Friendship Expedition requires a perfect fitness level and great endurance. It is recommended to spend a day at Beas Kund Camp and get used to the constantly changing weather conditions at different altitudes. Train yourself with some tricks and techniques to have a smooth trek to the summit. The presence of meadows and a heavy accumulation of snow will make the terrain a difficult one, unlike the other days. Brace yourself physically and mentally for the further steep climb ahead.

From Beas Kund Camp, you can reach the Advance Camp within 3 to 4 hours. Today’s trek entails moderate to steep ascends. On the way of this tiring trek, you may stop at certain points to take some rest. Also, don’t forget to take snaps of the intoxicating beauty of the mountains and the landscapes. Reaching the campsite, explore the beauty of the arduous mountains, and get ready for the sharp steep ahead.

This the most longs for part of this exhilarating journey. On this day, you can bask in the alluring beauty of the Friendship peak. The strenuous summit climb brings with it indescribable sights of the Pir Panjal Range and the Dhauladhar Range. You should begin your trek at around 3 am to 4 am so that you can reach the Peak and climb down before the sundown. It is recommended to reach the summit in the daytime to experience the divine view of the Peak in perfect visibility. The whole expedition will seem worthwhile after this experience. While descending from Bakarthach, you have to be really careful as you have to make your way through the snow and scree. You have to be sure-footed so that you don’t slip or meet with an accident. Reaching Bakarthach after this back-breaking trek, take some rest and chill out!

This is the last day of the trek. Trek downhill from Bakarthach to Solang valley following the same route. The downhill descend provides you with the same scenic views and this route also crosses through the same dense forests and riverside trails. Though this part of the journey is an easy trek downhill, you should watch your steps as you walk, as some trails might be slippery and undulating. Reaching Solang valley, you can take a cab to Manali. Spend the night at Manali, exploring the Mall road and embarking on some irresistible shopping. Mt Friendship Expedition is not just a trek, it’s quite an experience.