Tungnath: Trek To The Highest Temple Of Lord Shiva

Tungnath: Trek To The Highest Temple Of Lord Shiva

How about a peek-a-boo to one of the oldest and highest Shiva temples in the world?

The thought itself brings such a surge of overwhelming emotions, isn't it?

Tungnath Temple has perched on the Chandrashila Parvat in the Tungnath mountain range, in the state of Uttarakhand. It sits atop an intimidating altitude of 12,073 feet.

Tungnath Temple is a heavenly abode that literally translates to “God of Mountain Before. Set amidst the most beautiful backdrop, it is not only the highest temple of Lord Shiva but also the highest of the PanchKedar temples.

We will discover more about this magnificent place of worship, first, let us quickly learn about the Panch Kedar temples.

These 5 temples (PanchKedar) are the holy places dedicated to Lord Shiva and therefore, held in high esteem by Hindus for pilgrimage.

The strict order that one should follow for a pilgrimage to these temples is Kedarnath, Tungnath, Rudranath, Madhyamaheshwar, and Kalpeshwar.

Tungnath is the Tritiya Kedar (3rd) among the PanchKedars. 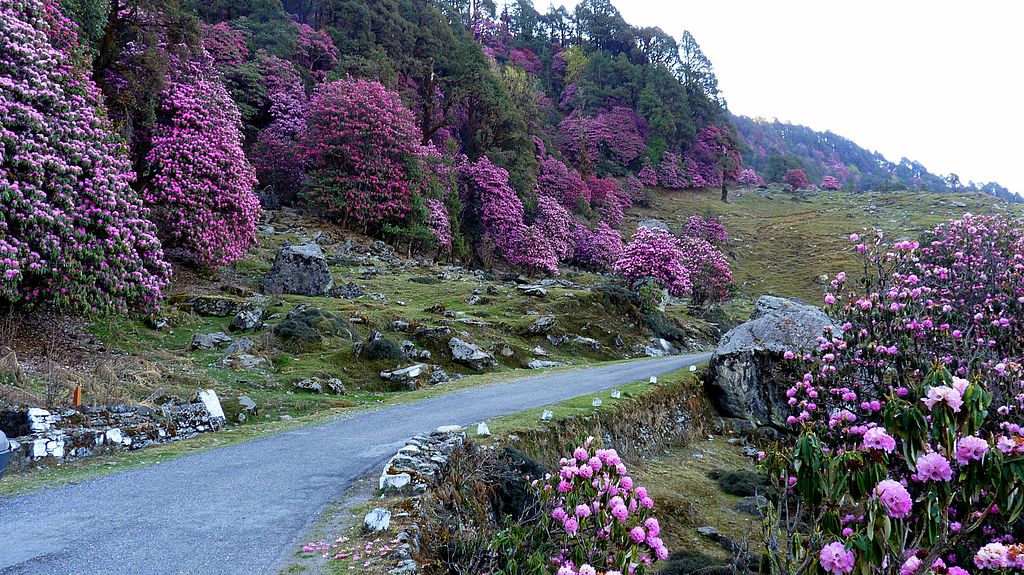 The beautiful meadow of Chopta is perched at an elevation of 8,556 ft in the lush evergreen forest area of the Kedarnath Wildlife Sanctuary. It is a small region that lays 29 km from Ukhimath. Chopta village, also famously known as the “Mini Switzerland of Uttarakhand” is the unspoiled hamlet in the Uttarakhand Himalayas with the mesmerizing view of the majestic peaks such as Trishul, Chaukhamba, and Nanda Devi that leave you awestruck.

Chopta village is blessed with the nature all around it, be it the forest of pine, deodar, and rhododendron or the chirping of the rare bird species to the animals from the wildlife sanctuary. Chopta will leave you mesmerized with its beauty.

Isn't it ironic that the trek to the highest Shiva temple in the world is short and moderately easy? The trekking route starts at Panger village and journeys to Chopta, the base camp of the trek. This simple yet adventurous trek of 5 km (from Chopta to Tungnath) is dotted with a mixed terrain against the backdrop of distinct Himalayan peaks. 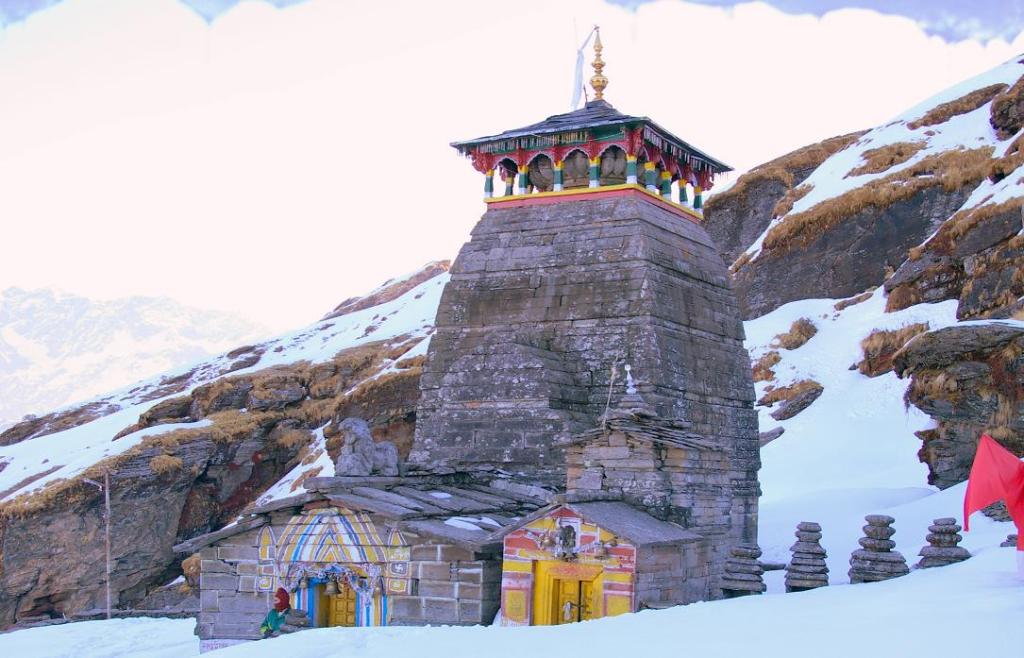 Tungnath temple, also known as Tunganth Mahadev is believed to be more than 1000 years old. It is said that the temple was discovered by Adi Shankaracharya. The temple is the abode of Lord Shiva and houses his beautiful idol. The idols of Goddess Parvati and many other Gods are also located in close proximity to this temple. Owning to harsh winters, the idol of Lord Shiva is moved to his nearby winter abode, Mukkumath Temple during the winter season.

The artistic architecture of Tungnath temple and its bewitching location attract hordes of tourists to this majestic abode of God.

Tungnath temple is best visited along with the Chopta-Chandrashila trek that also covers the high-altitude glacial lake called Deoria Tal. 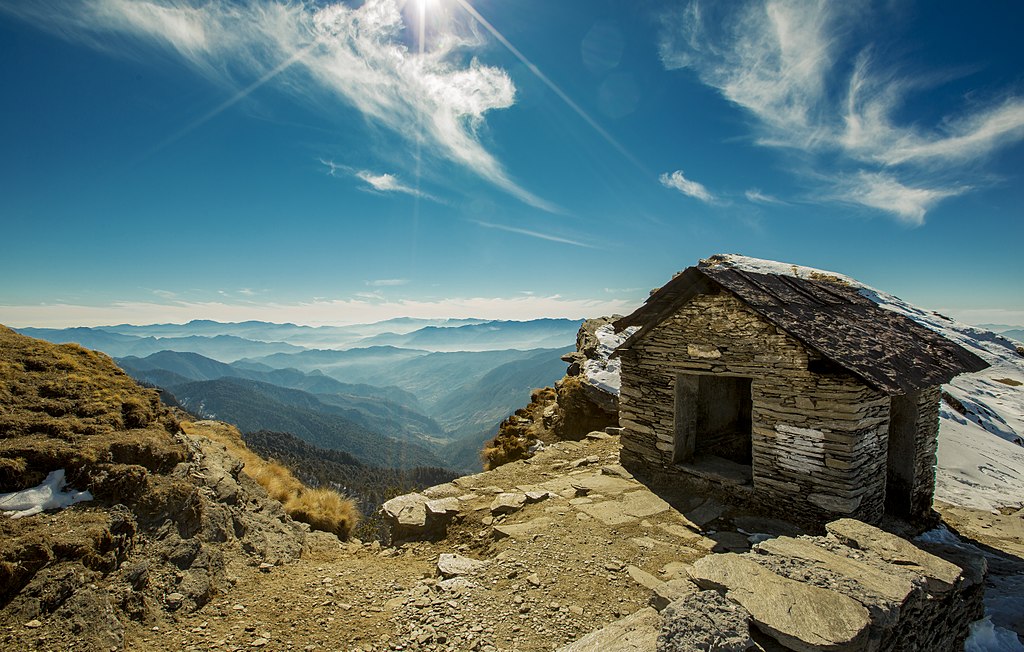 Chandrashila meaning the “moonrock” is the summit or the endpoint for the Tungnath Mahadev Trek. Chandrashila peak is at the alluring height of 13,000 ft above the sea level. Chandrashila has many legends associated with it. According to one legend, Lord Rama after defeating Ravana meditated at this peak. It is also believed that Lakshman, younger brother of Lord Rama meditated here at the Chandrashila Temple.

Another legend that makes Chandrashila peak such a unique destination is, Chandra, the god of the moon stayed here in self-abasement.

The trek route to Chopta Chandrashila trek journeys through lush meadows, quaint hamlets, and thickets of forests to reach the spellbinding temple. The trek moves further to Chandrashila Peak; it takes a steep hike of 1.5 km from Tungnath to reach Chandrashila peak.

The highlights are of the trek are Chopta village, Sari villages, Tungnath Temple, Chandarshila Peak, and Deoria Tal Lake.

While Chopta-Chandrashila trek can be an exciting all-year-round experience, it should be avoided in winters if you are not game for chilly weather. Also, the temple remains closed during the winter months.

Some quick facts about Tungnath-Chopta-Chandrashila trek

The mythology around Tungnath Temple 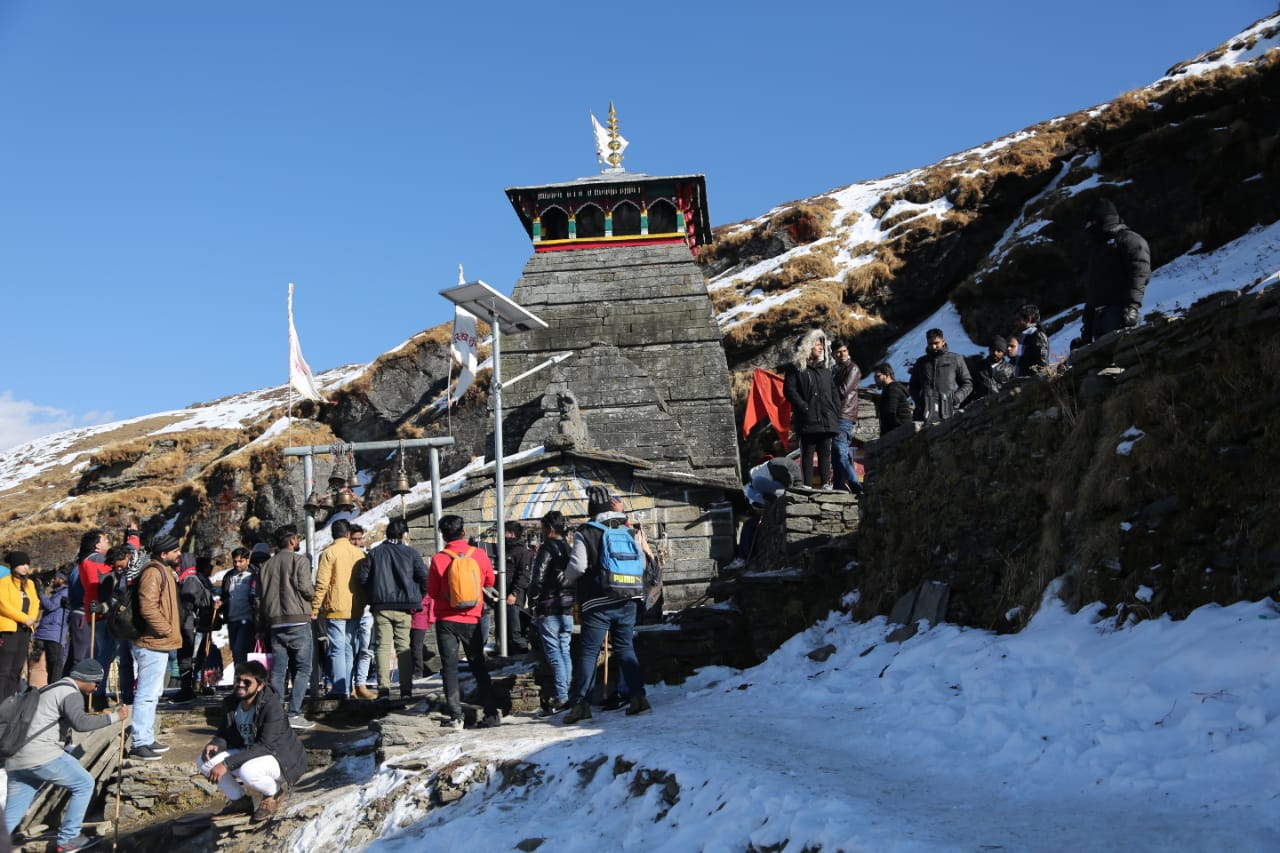 The mythology behind Tungnath Temple dates back to the times of Mahabharata. Legend has it that Pandavas after winning over Kauravas in the battle of Mahabharata seeks atonement of their sins. Rishi Vyas suggested Pandavas ask Lord Shiva for forgiveness.

Pandavas went in search of Lord Shiva in different directions. Lord Shiva was convinced of Pandavas' guilt of killing their cousins, Kauravas. Therefore, he avoided Pandavas by taking the form of a bull and hiding underground at Guptakashi.

Later, when Lord Shiva took his original form, His body parts were discovered in five different spots. Pandavas constructed five temples at these spots in honor of Lord Shiva, which are called the Panch Kedar.

Each temple is associated with the body part of the bull (Lord Shiva’s body) that was discovered there. According to scriptures, at Tungnath Temple, Lord Shiva's hands (bahu) were seen.

How to reach Tungnath?

The best way to reach Tungnath by air is via Dehradun. Jolly Grant Airport is the nearest airport to Chopta, it lies in Dehradun. From the airport, it takes around 9 hours to cover the 220 km distance to reach Panger village, near Chopta.

Dehradun, Haridwar, and Rishikesh are the nearest railway heads to Tungnath, at an approximate distance of 204, 184, and 162 km from Chopta respectively. Major trains like Shatabdi, Jan Shatabdi, Doon Express, and Rajdhani ply between these cities and other major cities of India. From Dehradun, Haridwar, or Rishikesh, there are taxis or buses till Panger village, near Chopta from where the trek commences. One can get many taxis/cabs just outside the railway station.

Delhi, Dehradun, Haridwar, and Rishikesh are well connected to major cities of India via State transport buses or private buses. Dehradun, Haridwar, and Rishikesh are at a distance of 204, 184, and 162 km from Chopta respectively. It takes approximately9 hours and 8 hours to reach Panger village from Dehradun and Haridwar respectively. From Rishikesh, it takes around 7 hours to reach Panger village.

Many taxis or cabs are also easily available that take you to Haridwar or Rishikesh from all the major cities of India.

The distance between Delhi and Chopta is 450 km. You can drive down in your own car or hire a taxi from Delhi to Panger village, it takes 10-12 hours.

Chopta has good motorable roads that connect it with all major towns in the Garhwal region of Uttarakhand state. Taxis/buses regularly ply between Chopta and Haridwar, Dehradun, Rishikesh, Rudraprayag, and Ukhimath.

Weather and temperature at Tungnath 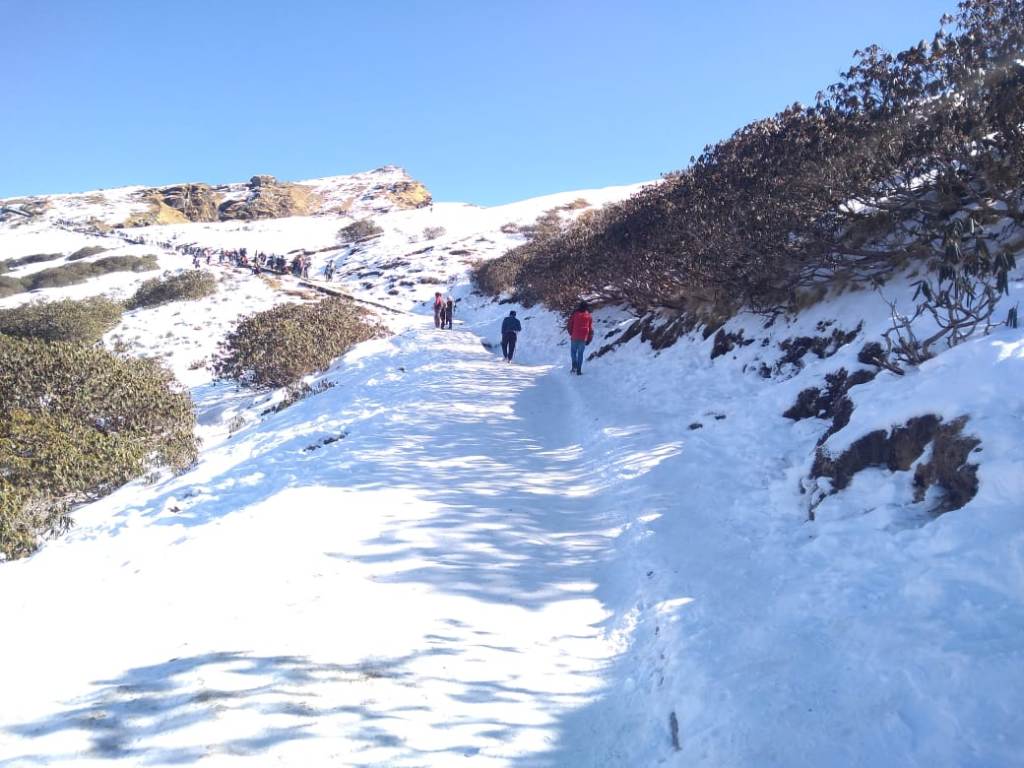 The weather from April to October (barring July and August) is very inviting with bearable temperatures. It offers the most comfortable and opulent framework for visiting Tungnath.

But the best time to undertake the Tungnath-Chandrashila-Chopta trek is in the winters when the area witnesses snowfall.

The major flipside is that due to heavy snowfall, the Tungnath temple is closed for 5 to 6 months during winter.

Let’s look in detail what each month has to offer.

Spring-Summer months of April to June

The spring and summer months are ideal to embark on Tungnath trek as the climate is refreshing and extremely pleasant. The average temperature of the place shuttles around 16 degrees Celsius. Rhododendrons in tones of red, pink, and white adorn Chopta village in April and May. The spring-summer months offer the perfect ambiance for trekking and the beauty of the terrain is at its pinnacle.

Fall months of September to November

This beautiful region of Uttarakhand blazes with a variety of fall colors in autumn months. The region bathes in the sparkling beauty of fresh greens from the monsoon months gone by. The freshness in the landscape is palpable.

Winters months of December to March

The months of December, January, February, and early March impart a fairy tale look to the place. The pristine beauty of the region cannot be put into mere words.

There is no doubt that the winter trek to Tungnath Temple and ahead is a bit tricky because of the region witnesses abundant snowfall. The temperatures can range between 10 degrees in the daytime and drop to even minus 15 degrees in the night.

However, the beauty of the trek during winter time is ethereal. The crystal-clear skies and stark views of snow-capped Himalayas make your trek every bit worth it. The Tungnath Temple and Chandrashila Peak are blanketed under thick sheaths of snow.

Things to do in Tungnath 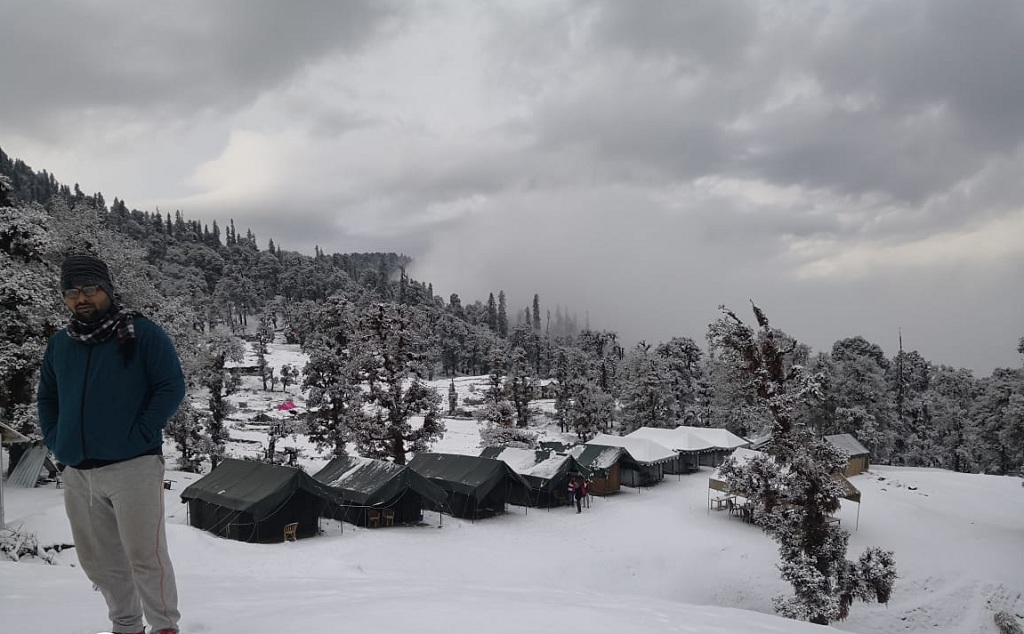 Tungnath is not an exclusive sightseeing locale. But it offers the most mesmerizing spiritual and adventurous experience to tourists. It is one of the ancient shrines snuggled amidst the picturesque backdrop that equals a picture postcard setting.

Pilgrimage- Out of the 5 PanchKedar shrines, Tungnath is the highest Shiva temple that holds deep reverence for Hindus. Pilgrims embarking on the Char Dham yatra usually visit Tungnath to seek blessings of Lord Shiva.

Trekking- The trekking route to Tungnath starts at Chopta. The trek of easy grade level takes you to the scintillating landscape of Garhwal Himalayas.

Birdwatching- The region in and around Tungnath, especially Chopta, is home to exotic species of birds. You can watch wild goat, Monal, Pika Mouse, and also musk deer, if lucky. The ideal months for bird watching are from February to April.

The hushed hamlets of Sari and Chopta are the hidden gems of Uttarakhand. The sunrise view at Sari and Chopta is a once-in-a-lifetime experience. When the crimson rays of the sun paint the snow-laden mountains in hues of red and orange, the villages look paradisiacal.

Deoria Tal, the emerald water body set amidst the mammoth Chaukhamba peaks is a sparkling jewel that enamors tourists with its sheer beauty.

How long is the Tungnath Trek?

Tungnath trek is only 5 km from Chopta. It is easily completed in 4 to 5 hours with frequent rests in between. Much of the time taken depends upon the physical and mental endurance of the trekker. Tungnath trek route is the shortest as compared to the other PanchKedar routes.

Tunganath is one of the safest trekking routes of the Uttarakhand region. However, one should avoid undertaking the Tungnath trek in the months of July and August. The region receives rainfall and is prone to landslides and road blockages. Tungnath is touted as a winter trek for adventure seekers and nature lovers. But winter months should be avoided if you don't enjoy the cold weather. A point to note is that the wildlife in the Chopta region can be a little hostile. Therefore, tourists should not move around in the forest after dusk.

What is the difficulty level of Tungnath Trek?

The trek to Tungnath Temple takes you to an elevation of almost 12,000 feet above sea level. It is touted as a trek of moderately easy grade level. The trek journeys along with thick forests and expansive grasslands, and treats one with the breathtaking vista of snow drifted the Himalayas.

Is there snow in Tungnath trek?

In the winter months from December to early March, the temple of Tungnath is bedecked with a thick layer of snow. Snowfall is very common during this time of the year. The temperatures can go well below the freezing point. The air is crisp and the skies azure blue. If you are a winter buff who loves snow then winter is the season for you. It is recommended that you carry warm layered clothing to keep yourself comfortable. Trekking during these months is full of adventure but if you can take up the challenge then go for it.

In short, the Tungnath-Chandrashila peak trek is an upbeat mountain adventure soaked in spirituality and fun! This trek located in the heart of Uttarakhand makes for the most momentous excursions in the lap of nature. Just go for it!