Written by Meenakshi on 17-May-2020
Read About Author

People from all over the world take tours to high altitude places for adventure sports like trekking or tourism. Some sports competitions are also held at high altitudes. But with increasing altitude, there come several issues that human bodies can face. It is to be kept in mind that any area that is above 8,000 ft of the sea level is regarded as high altitude.

What happens to the human body with altitude gain?

The pressure of the air falls at high altitudes and reduces the oxygen level in the air. The exposure to a higher altitude increases the need for ventilation as oxygen intake becomes harder. This leads to a faster breathing rate. The capacity to exercise is also compromised as muscles lack adequate oxygen flow.

The increase in water loss with high altitude can lead to dehydration. The loss of appetite is a result of increased metabolism, so it is advisable to eat a little more than usual. This would ensure that the neutral energy balance of the body is well maintained. 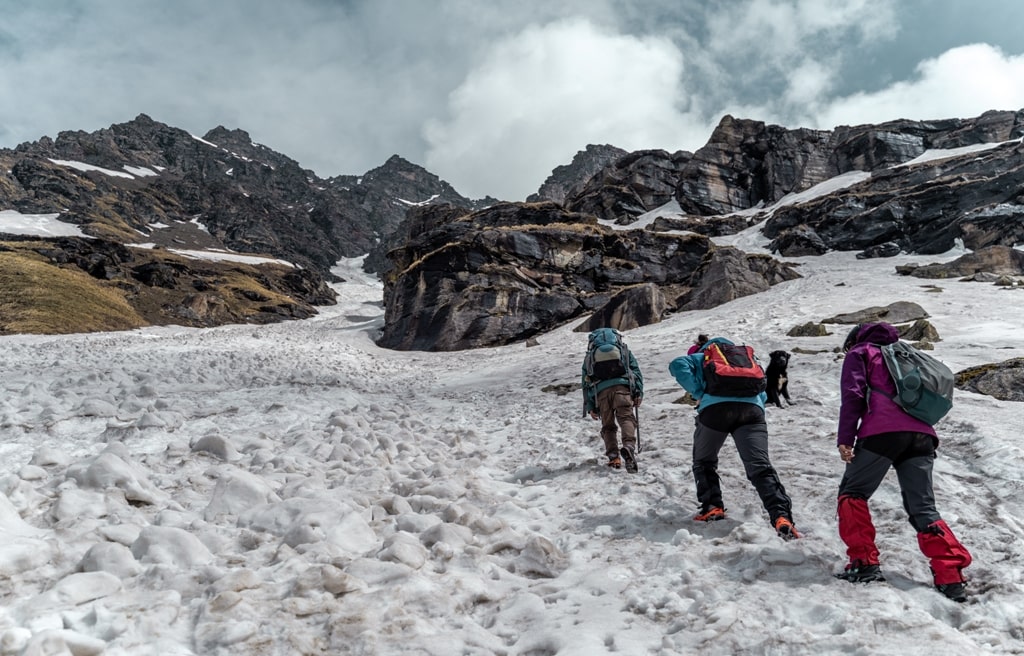 The human body has learned to adapt and partly compensate for the lack of oxygen in the air. If a person spends many days or weeks in an oxygen-deprived area, the body naturally increases the amount of oxygenated blood. The heart starts pumping faster and the pulse rate rises.

Blood count in humans is managed by the bone marrow. At high altitudes, more red blood cells (RBC) are produced as they carry blood in the body. But too much of RBC can lead to the thickening of blood and clotting in the end.

The frequency of urination also increases with high altitude as the body tries to get rid of extra fluids. Both the heart and the lungs function vigorously in a thin air condition. Sleeping hours also get compromised as the brain will constantly remind you to breathe.

Only some people face altitude sickness – why?

When a person from a moderate altitude climbs up to a relatively higher altitude, symptoms of altitude sickness is most likely to hit them. The body starts reacting to the change in altitude in about 6-48 hours from the first exposure. Headaches, lethargy, nausea, disturbed sleep, and dizziness are some of the effects of altitude sickness. Trekkers should climb slowly and not rush to altitudes above 2,500 m.

Altitude sickness is hard to predict. It can be seen in professional athletes as well. People having a lesser ventilatory reaction to hypoxia (absence of adequate oxygen in the tissues to support bodily functions) should be careful in high altitudes. Thalassemia ( a blood disorder involving less than normal count of oxygen-carrying protein) increases the danger of the symptoms in the body.

However, people living in high altitudes have greater physical tenacity. Their lungs function brilliantly and oxygen transportation is steady in the blood. It is yet to be known if the characteristics are genetic, or acquired over time.

The physical performance of an individual is usually less at high altitude for the overdrive.

What happens to air at a higher altitude?

The composition of air ( nitrogen 78.09%, oxygen 20.95%) remains the same at all levels. The “partial pressure” of oxygen changes at high altitude. It means that the percentage of oxygen present in the air is less, in comparison to the air at the sea level. With the air molecules pressed together, oxygen is more concentrated at lower altitudes. But the molecules in the air are not pressed together at high altitude. The lack of pressure reduces the concentration of oxygen molecules present in the same amount of air we inhale. This condition is often referred to as ‘hypoxia’.

How does the change in altitude affect the body?

The human body is likely to respond to a severe change in altitude. Any high altitude place is an overdrive, so the body may be losing energy even while resting. Here are how the following parts of the body react to altitude change –

The lungs play a crucial role as it acts as an interface between the environment and the functions of the body. The body automatically takes compensatory measures( the process of acclimatization) to overcome the thin air. This causes acute mountain sickness (AMS) which is accompanied by headache, gastrointestinal problems, and sleep disturbance. The main function of the lung is hyperventilation, i.e. supplying oxygen to the tissues. Fluid starts building up in the lungs. The breathing rate also increases, even at rest.

The blood tries to increase the amount of circulated haemoglobin ( the oxygen-carrying protein). The steady flow of oxygen in the blood ensures the muscles function properly. However, excess haemoglobin in the blood can result in severe clotting.

The damage to the brain is often temporary, but it can turn deadly as well. The first exposure to altitude causes nausea, vomiting, headache, insomnia, fatigue, and dizziness. The condition gets worse when a person develops High-Altitude Cerebral Oedema(HACE), i,e the swelling of the brain. HACE can also result in causing deaths. The lack of oxygen damages the brain cells.

Kidney diseases progress faster at high altitude which can lead to renal hypoxia and renal injury. There is an increase in the frequency of urination as the body tries to get rid of excess fluids. But the urine output and sodium excretion depend on the partial pressure.

Cardiovascular system gets affected at high altitudes since the level of oxygen in blood decreases. This causes the heart to pump faster, increases adrenaline release and pulmonary artery pressures. Patients suffering from cardiac issues should avoid places of thin air as they are prone to heart attacks.

The Rupin Pass Trek is a high altitude trek which requires proper fitness level, and usually a prior experience of a Himalayan Trek. Since the trekking experience includes covering 3,000 ft at times in a single day, acclimatization is very necessary. This trek primarily tests cardiovascular endurance and core strength and comes with a risk of AMS. The symptoms of AMS include fatigue, mild headache, nausea, and general discomfort. To avoid Acute Mountain Sickness (AMS), keep yourself hydrated at all times. Reach camps and take acclimatization walks. Stay awake during the day and adapt to the environment.

The Auden’s Col Trek is a high altitude trek which is regarded as one of the toughest treks. It is only recommended for skilled trekkers as trekking in this terrain is difficult and tricky. The ideal BMI for any Himalayan Trek is around 18.5 to 24.9. Balance, muscle flexibility, the strength of the legs and cardiovascular endurance are tested during this trek. The trek has one of the highest altitudes, so the risks of getting Acute Mountain Sickness is extreme. It is very important to give the body adequate rest and time to acclimatize to the change in altitude. Trekkers can face serious health issues if the altitudes change fast and drastically. Some of the symptoms of AMS include serious headache, fatigue, nausea, dizziness, loss of appetite, rapid heart rate, and sleep disturbance. If not taken care of, these symptoms can also turn fatal.

The Mayali Pass trek is regarded as a hidden gem as it is less explored by trekkers. The trail is ideal for pilgrims travelling from Gangotri to Kedarkantha. The trek route is blessed with beautiful streams, dense forests, pristine river bodies, high plateaus, and glaciers. Proper fitness is required for the trek. Owing to the high altitude, acclimatization is very necessary. Most symptoms of Acute Mountain Sickness (AMS) heal quickly as they are mild and don’t have long term after-effects. The camp at Masar Tal is the coldest camp of the trek. Take adequate time to adjust to the temperature. Dizziness, insomnia, irritability, headache, loss of appetite are some of the symptoms of AMS. But there are chances of the symptoms turning fatal.

The Pin Parvati Pass Trek is an extremely difficult trek with high risks. The 112 km trail of the trek is tricky and one needs to be attentive at all times. The river Parvati lies just 50 ft. below from where the trail hangs. The terrain is dangerous with narrow sections. The area is also prone to landslides and rockfalls. Evacuation is an issue in this trek, so the trekkers have to follow the instructions of acclimatization carefully. Acute Mountain Sickness is very common in this trek and it can take serious turns if not treated well. The mild symptoms include nausea, vomiting, shortness of breath, rapid heart rate, dizziness, fatigue, and more. However, chest congestion, lack of balance, skin discolouration, and pale complexion are some of the symptoms that indicate the seriousness of the AMS.

The Roopkund Trek is a 53 km long trek with various ascents and descents. It is one of the most popular treks in India. Even the most experienced trekkers face dizziness on this trek. Many marathon runners also face difficulty in completing this trek. There are chances of AMS for any high altitude trek, so Roopkund is also not an exception. But the symptoms of AMS can be kept under control if acclimatization is proper. Take adequate rests and avoid climbing too fast. Give the body a certain amount of time to adjust to the change in temperature. The symptoms include dizziness, nausea, irritability, loss of breath, and muscle aches. People having low red blood cell count, heart, and lung diseases should avoid such high altitude treks. These treks can amplify the symptoms of the existing health issue and cause deaths.

Altitude sickness is caused by climbing high without any rest. The body requires a minimal amount of time to adjust to any given environment. This process of adjusting to the fewer molecules of oxygen is known as acclimatization. The number of oxygen molecules per breath reduces with an increase in altitude. Acclimatization is necessary while trekking as a lack of adjustment can cause life-threatening diseases. It is only when an acute mountain sickness(AMS) turns towards HAPE( High Altitude Pulmonary Oedema) or HACE( High Altitude Cerebral Oedema) that it becomes deadly. Eating and sleeping well, ascending slowly, staying hydrated, and regulating body temperature helps in acclimatization. The body faces less discomfort if it is acclimatized well. It is mostly accepted that the pace of acclimatization is dependent on genetics. The trekking companies keep adequate resting time for the better performance of individuals.

Trekking is a wonderful adventure sport that is loved by all. But it comes with a fair share of health problems. Acute Mountain Sickness is pretty common among people who climb too fast. The effect of high altitude in the human body usually are short-lived, but can also turn fatal if not taken care of. Hence, it is really important to give time to the body to adapt.

Written by Meenakshi on 17-May-2020
Read About Author