Written by Souromi on 28-Dec-2020
Read About Author

Kedartal is one of the most sought-after destinations in Uttarakhand. The beauteous lush green valleys, dream-inducing meadows, cascading waterfalls, wooded birch forests, gushing rivers, define the sublime beauty of this trek. Kedartal is a beautiful, crystal clear, emerald lake.

Kedartal, a glacial lake, is a heavenly abode seated at an altitude of 4750 meters above sea level, in the Uttarkashi district (1158m) of Uttarakhand. It is nestled in the Garhwal region of the mighty Himalayas. 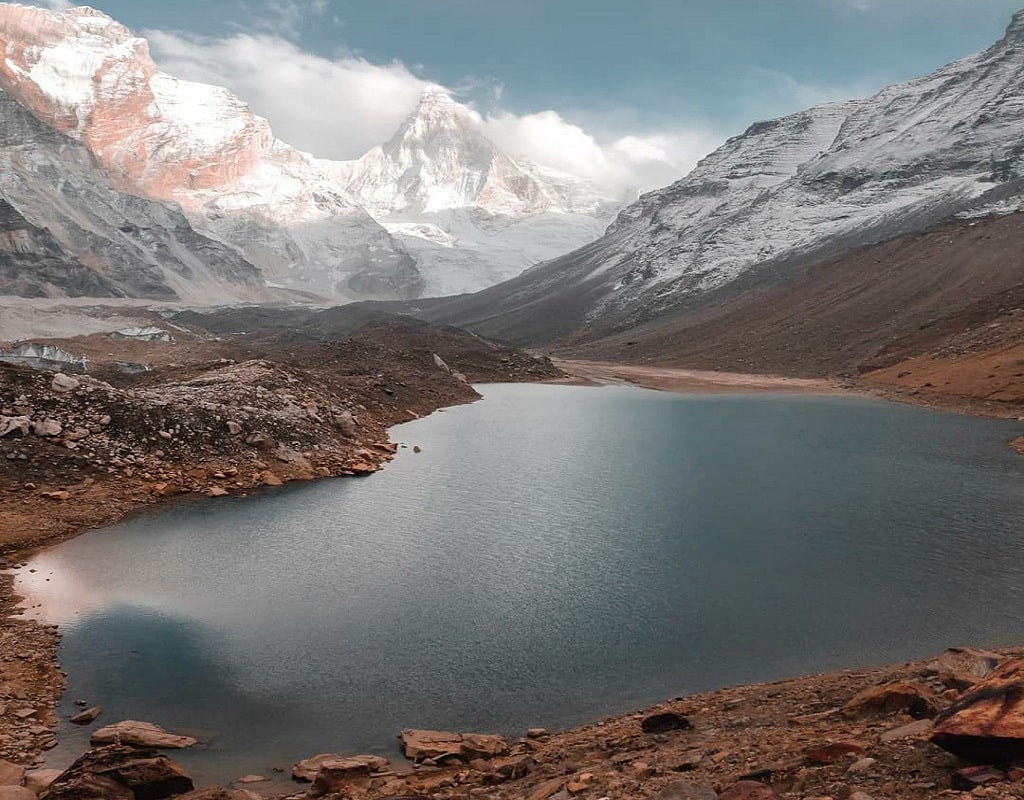 Kedartal Lake is also termed as “Shiva’s Lake” and is considered to be one of the high altitude lakes of Uttarakhand.

The Kedartal Lake, at an elevation of 15485 ft, is located at the foot of the Thalaysagar and Brigupanth Peaks. This scenic lake gets draped in the melting snow of Brigupanth Peak and Thalaysagar Peak, making it all the more gorgeous and alluring.

According to Indian Hindu Mythology, the Kedartal Lake is Lord Shiva’s contribution to the Bhagirathi River. This Lake has originated from the melting away of the Kedar glacier.

It then threads its way to the Kedar Ganga River which is also an important tributary of the river Bhagirathi.

The trek to this angelic lake provides a sneak-peek view of the famous snow-clad peaks like Mount Manda, Bhagirathi, Mount Meru, Mount Jogin, Mount Gangotri, and Thalaysagar. This location is extremely diverse with ravishing landscapes, pious rivers, and panoramic views of the arduous mountain ranges.

Activities in and around Kedartal

Exploring the hidden gems of Kedartal Uttarakhand makes the trekking experience an unforgettable one. There are some interesting activities which can be done during your visit to Kedartal.

The trek to Kedartal is a 17 KM long trek, starting from Gangotri with Kedar Ganga River flowing along the sides.

This stellar trek is a proud witness to the unparalleled rugged beauty of nature which is extremely refreshing and welcoming. This trek alone is privy to the magnificent beauty of the reflections of Thalaysagar Peak. 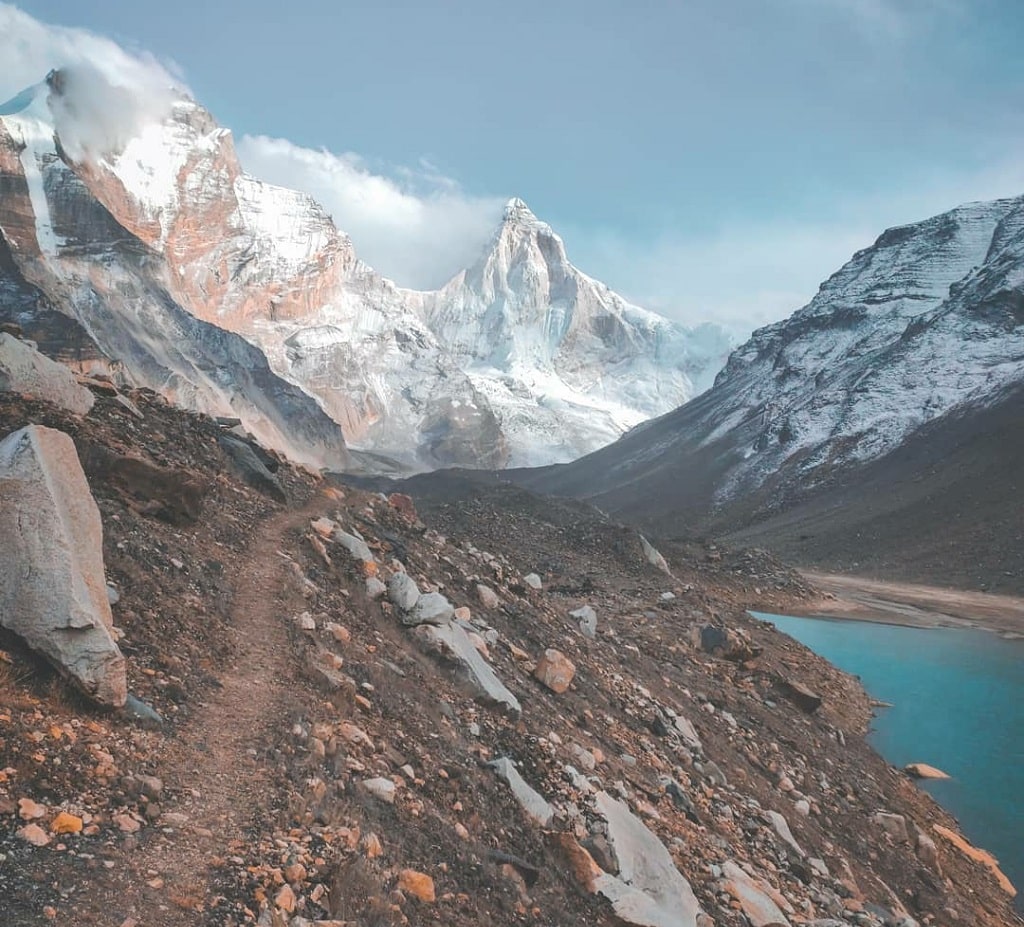 This trek takes you through the most surreal valley of Gods, thick birch forests, resplendent rhododendrons, a divine high-altitude river, and the flora and fauna invite you to delve deep into its otherworldly beauty and thereby garner a life-altering experience.

The trekking trail of Kedartal Uttarakhand is meant for seasoned trekkers and calls for experience and sheer patience. The idyllic beauty of this trek is beyond articulation as the zigzag paths lead one through aspiring meadows and alpine forests.

The sight from Kedartal Lake is absolutely awe-inspiring and rejuvenating. Through the Kedartal trek, one can view the mesmerizing beauty of the Gangotri glacier at its haunting best.

Do we need Permit for Kedartal trek?

During the Kedartal trek, you need to fetch a permit to start the journey. You have to be kitted with authorized permission from the official authority to undertake a smooth and hassle-free journey. You can get your Kedartal trek permit from Gangotri after you fill in all your details.

You can also fax the authority all your details before-hand and collect the Kedartal trek permit as soon as you reach Gangotri. You are also required to carry your ID proof always.

Why Kedartal trek is a difficult one?

As you climb higher the oxygen level in the air becomes thinner making the trek more and more exhausting. It can also lead to hypoxia if the proper methods are not followed.

The snow patches along the trekking path to Kedartal also make navigation difficult. The trek trail is full of perils and unpredictability. The path is steep, filled with boulders and slippery rocky surfaces on all sides.

To reach the summit, the trekkers need to cross dense pine and birch forests, sliding zones, and high elevated pastures. The infamous spider walls on the trekking path to Kedartal Uttarakhand are quite challenging to traverse through.

These are the things that the trekkers must take guard against while on the trek. One must be sure-footed and alert while negotiating the steep drops and tricky terrains. However this journey, despite being somewhat dangerous is extremely thrilling and challenging for all the trekkers and adventure buffs. The par excellence view upon reaching the destination is absolutely worth the risk.

Kedartal in May is very invigorating and thirst-quenching. You will find the lake frozen all around with the snowy mountains in the backdrop.

The fine rays of sunlight on the hard crust of the frozen lake glisten up the surrounding, providing an exceptionally shiny picture.

During this season, the presence of the leftover snow on the trek trails is a major attraction. The snow-topped mountains, brightening up in the summer sun is just heavenly to feast your eyes on.

Kedartal in summer (mid-May to end June) is the perfect time to undertake this trek. Kedartal in May remains quite warm during the day with a 20 degrees Celsius temperature. The evenings are quite chilly and the temperatures at night plummet down quite often. Winter clothes and woolens should be a constant companion.

After the monsoons, Kedartal becomes squeaky clean and exudes fresh earthly smell all around. Kedartal in September offers the trekkers unhindered and the clearest views of the majestic snow-filled mountain tops. The Kedartal Lake gets decked up in the shade of emerald green or blue depending on the weather conditions. This season blesses the trekkers with the perfect reflection of Mount Thalaysagar in its waters.

Another major attraction during the autumn season is the snow plumes. With heavy gusts of wind blowing sans cesse at the mountain tops, the snow gets blown away into the air forming the shape of the plume on hats.

During this season, the silver birch trees put on a golden yellow color with their trunks shining brightly in the autumn sun. In this season, you can also spot the mountain goats – Bharal. Kedartal in autumn (mid-September to end-October) is quite cooler than summers. During the day the temperatures hover between 13 degrees Celsius to 15 degrees Celsius and at night it falls drastically. From the end of October, the snowfall begins at the higher campsites of Kedartal.

Written by Souromi on 28-Dec-2020
Read About Author