The Roopkund trek is the most common inclusion in every trekker’s list in India and also a famous journey to a pilgrimage shrine as well. It is not only a popular trek amongst Indians but also in foreign countries as well, mainly for its beauty, sense of adventure and mystery that it brings along. Along with the dense green virgin forests, gurgling rivulets, streams, breath-taking campsites, vast stretches of rolling meadows, snow and the ice-covered terrains, the mysterious frozen lake adds to the vibe of adventure when you trek your way from an 8,000 ft to 16,000 ft in six days.

Roopkund Trek has been quite a popular trail for long. In 1942, a British Forest guard found several hundreds of skeletons near the frozen lake of Roopkund. This gave Uttarkhand’s Roopkund Lake the name of Skeleton Lake. All these added a sense of mystery, as intrigued trekkers and travellers from all over the world as they began stepping into the trail to get a sense of adventure for themselves. 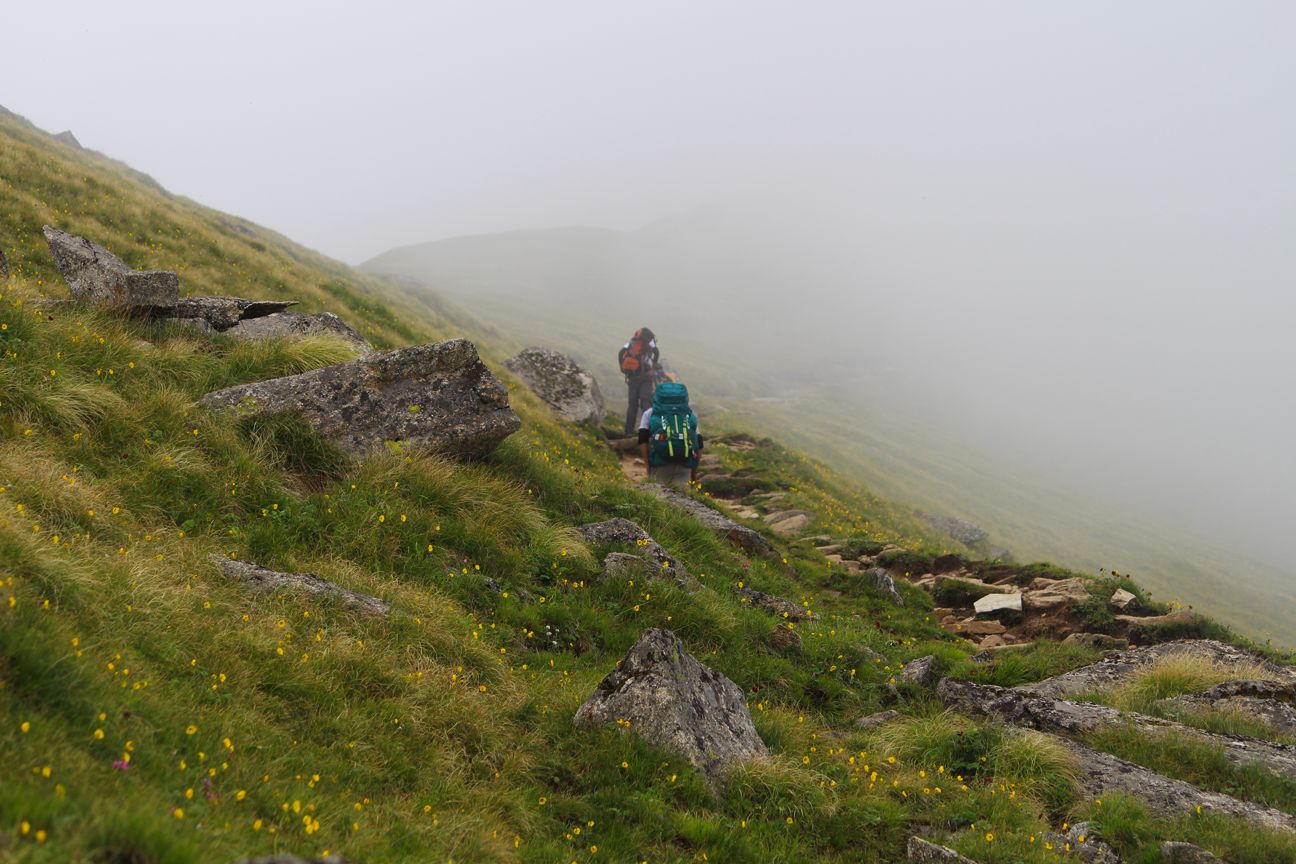 About 5000 meters above the sea level, Roopkund, or more specifically, Roopkund Lake is located in the Garhwal Region of Uttarakhand. While the discoveries in the ‘Skeleton Lake’ adds mystery, the surrounding scenery and nature’s glory from the base camp itself is spellbinding and is bound to make you speechless. The trail starts off with beautiful views of the great Himalayan mountains and it cuts through dense dark forests, which suddenly opens up into the grand Ali and Bedni Bugyal. These are beautiful high altitude meadows that are picture-perfect in every way, sporting several varieties of flora and fauna. On crossing the beautiful rolling meadows, you walk into the dense alpine stretches of the trail. After having your fill of green, you get sheets of ice and snow, and the majestic white covers, along with the famous lake.

Trekking your way through the meadows, forests on the dry leaves and snow to the Roopkund lake is a thrilling experience that you are bound to love. From getting a glimpse of the famous Mt Nanda Ghunti and Trishul on the first day itself, as you make your climb, you get to see the beautiful Mt Trishul getting closer to you till it gets right in front of you when you are at the ridge above Roopkund.

The Roopkund Lake, also known as the Mystery Lake or the Skeletons Lake is a high altitude glacier-fed lake in the Chamoli district of Uttarakhand, India. Situated at a mind-blogging altitude of 16,470 feet or 5,020 meters above sea level, It lies in the lap of the Gharwal Himalayas, more specifically - the Trishul massif. Given its high altitude and terrain, the nearby region around the lake is uninhabited but is surrounded by tall snow-covered mountains and peaks. Given its history and religious significance, its locale and the beauty of the nature of the surrounding area adds on to the ambience of myth, mythology, and mystery. The lake is a part of the Nanda Devi National Park. 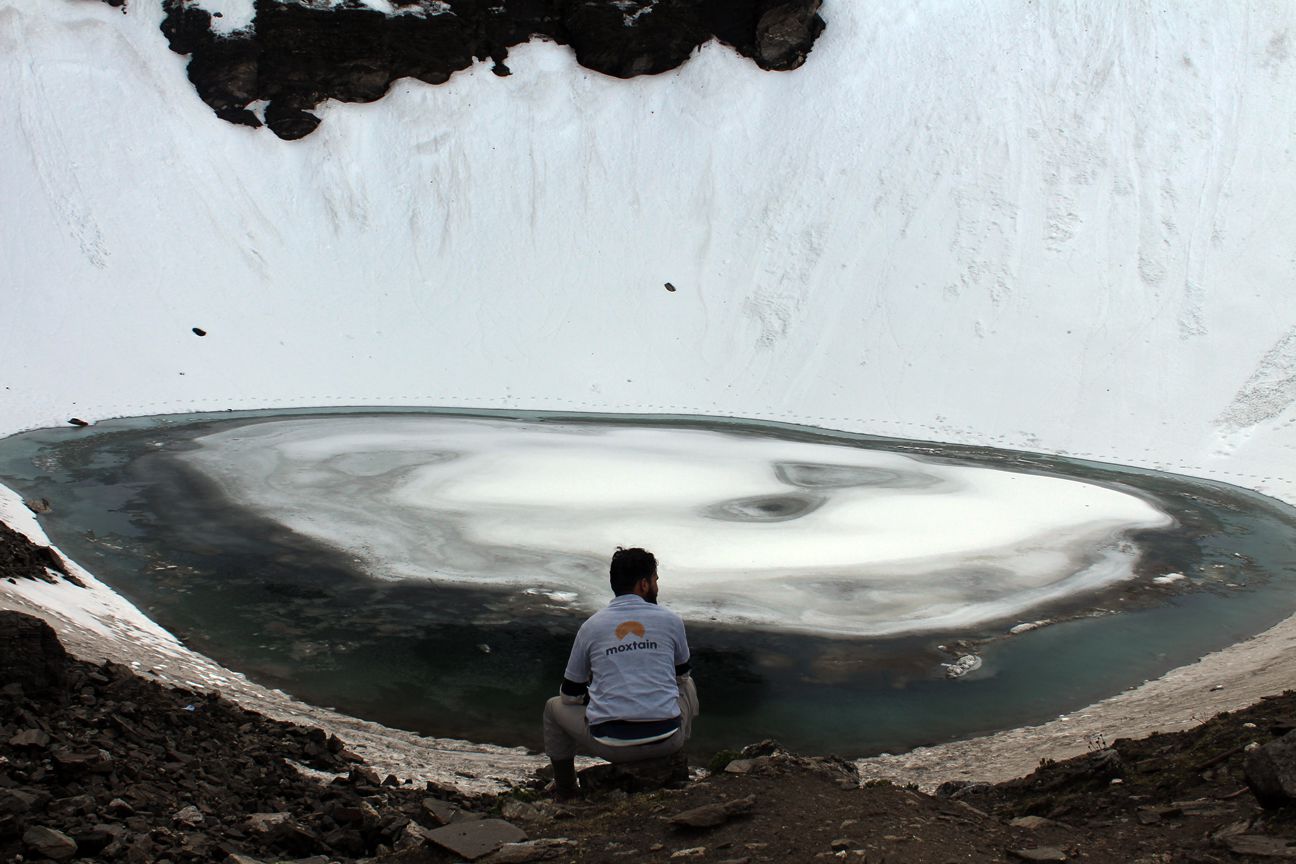 The beauty of the lake is mesmerizing as the soft sun rays fall over mountain ranges, on to the lake. With snow-covered peaks surrounding the lake, and the mythology and folklore in mind, the ambience of the lake is exceptionally magical.

Once here, you can understand how the setting plays a great role in mythology how truly this place is the ‘Land of Gods’. With sights of peaks and snow-covered mountains looming over you all throughout the trail, they all get a lot closer once you are in near the lake. Peaks like the Trishul, NandaGhunti, Neelkanth, Bandar Poonch, Gangotri, Chaukhamba range, Maiktoli, Mrigthuni, Chanyakot and many more can be seen on this trail.

On the discovery of human bones in 1942 in the Roopkund Lake, initially, it was believed that the skeleton bones were of the Japanese soldiers who had died while crossing the Roopkund trail during World War II and then lost their lives under mysterious circumstances. 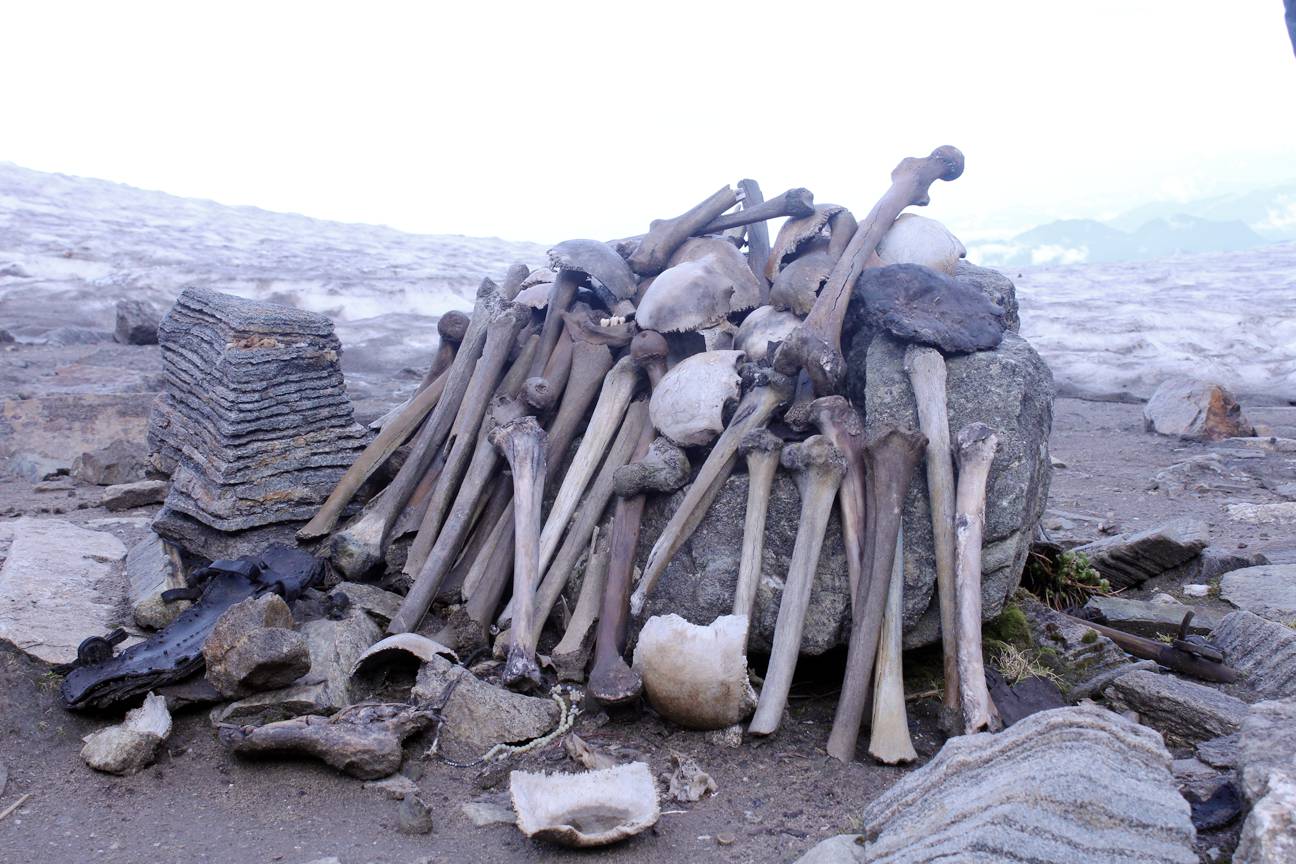 Located at an altitude of 5,029 meters in the great Himalayas at the Chamoli district of Uttarkhand, the news of this mysterious findings added interest to the already popular trek trail. Found at the edge of the lake, these skeletal remains were only visible when the snow melted along with wooden artefacts, iron spearheads, leather slippers, and rings were also found. Later on, on further investigation scientists discarded the rumours and concluded that the skeletons were of pilgrims and locals of this region, as the bodies were dated to around 850 AD. Local legends say that on their way to the pilgrimage to the Nanda Devi shrine, the King of Kanauj, his pregnant wife and his group perished near Roopkund Lake on facing a severe hailstorm, and claim it to be their remains.

Nevertheless, these findings gave a mysterious feel to the already beautiful glacier-fed Roopkund lake, with the surroundings of frozen glaciers and ice-covered mountains. The two meters deep lake invites hundreds of trekkers and pilgrims every year. While trekkers prefer hiking on this trail for its beauty and the intriguing mysterious ambience, thousands of pilgrims visit Roopkund every year to worship Nanda Devi. The grand event of the Nanda Devi Raj Jat, taking place every twelve years, invites several pilgrims to worship Goddess Nanda at Roopkund.

The mythology of Roopkund Lake

Being the Land of Gods, Roopkund and its surrounding areas are the sites of interesting mythological events and folklores. According to Hindu scriptures, it was in the Bedni Bugyal that the four Vedas were written. Near Bedni Kund, it is said that Maa Durga had killed Demon Mahishasura in her Kali Avatar, making the place auspicious. 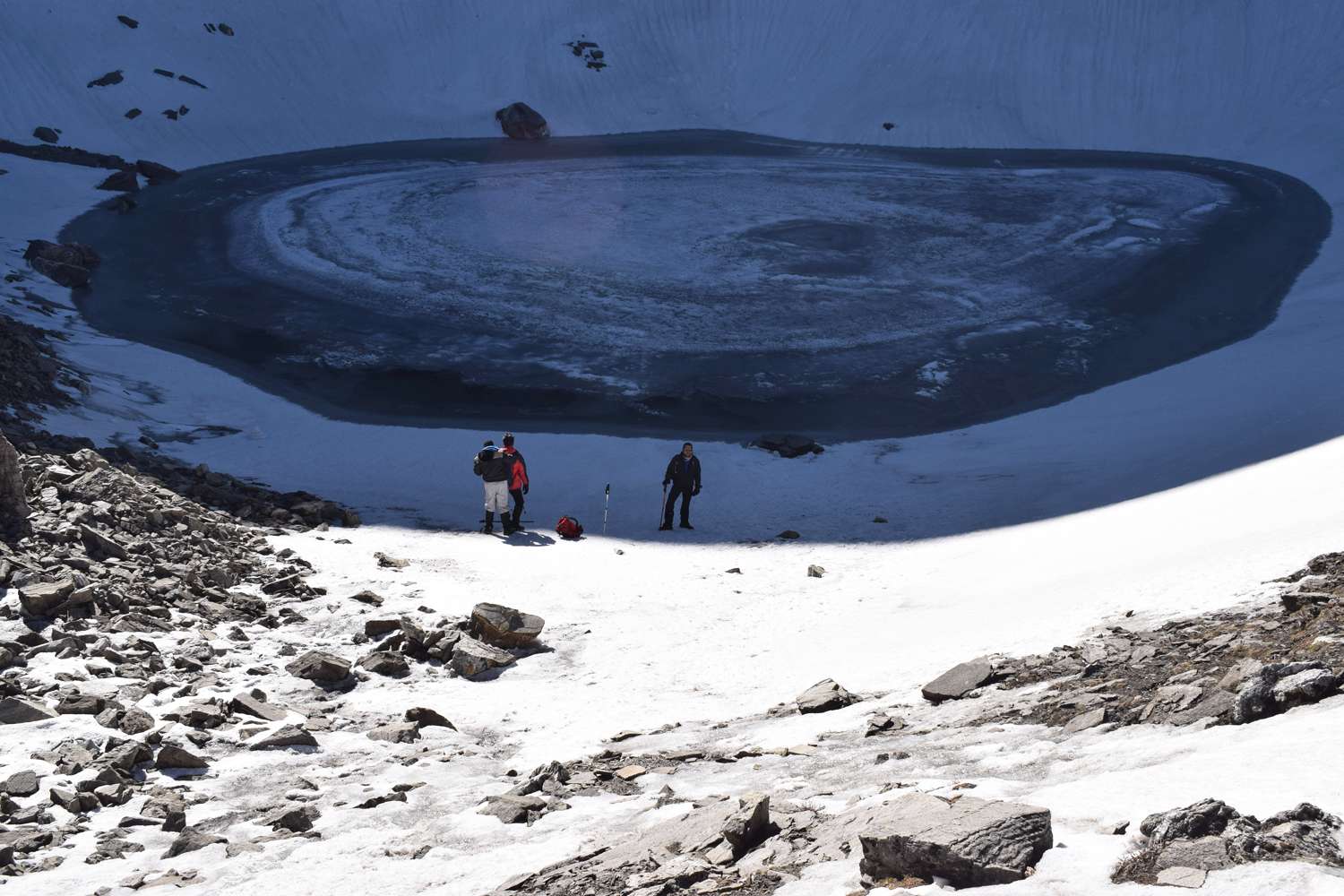 According to the legends, after her fight with the demons, Goddess Parvati wanted to clean herself up. So, Lord Shiva created a lake with his Trishul and stood guard while his wife bathed in the lake. As she bathed, she could see her clear and beautiful image in the reflection of the blue waters of the lake, thus naming the lake as Roopkund.

One can see the Roopkund crater from the Kalu Vinayak Pass for the first time during the hike. Legend has it that this is where Lord Vinayak was standing guard while Parvati took her bath in the Roopkund Lake.

The Nanda Raj Jat Yatra takes place every 12 years. The locals believe that a mysterious four-horned ram comes to visit this place and is auspicious, and is probably a form of God. During this grand event, thousands of pilgrims visit the Hem Kund Lake to pay homage to Goddess Nanda Devi.

Local legends have it that King Jasdal of Kanauj was on his way with his wife to undertake the pilgrimage and win the Goddess’s favour. As the queen delivered a child on the way, Goddess Nanda Devi got angry as she felt that it had spoiled her holy land. The Goddess thus sent a violent snowstorm killing hundreds on their way to pilgrimage. This also explains the skeletal remains in the Roopkund Lake.

The presence of the king’s pilgrimage can also be seen in Pathar Nauchuni. Translating to ‘Dancing Stones’, one can see a few big stones here. According to the folklore, during the annual pilgrimage, the king got distracted by the royal dancers. This invited the Goddess’s wrath who cursed the dancers and turned them into stones.

Features of the Roopkund Trek, at a glance

Considered one of the most beautiful treks in India, Roopkund trek is a moderate to hard trek in terms of difficulty. The trail being of a length of 53kms, it is divided into 6 days for you to complete, which takes you Roopkund and back to your base camp, Wan.

The trek offers a sense of adventure and thrill that trekkers look for, as it is a trail with steep climbs and slippery descents down the mountains. The cautious hike along the sharp and exposed ridge as you make your way towards Junargali while you hold on to a rope is a memorable experience in any trekkers life. It is not only the adrenaline rush of the entire of the experience that makes your trek so special, but also the views that it comes along with. The trek brings you quite close to the famous and spell bounding Mount Trishul and Nanda Ghunti, making it one of the most loved trek trails of India.

The view of the two vast high altitude alpine meadows on the trek- Ali Bugyal and Bedni Bugyal, located above 11,000 ft, will take your breath away for sure. To put things into perspective – it takes two days to cross these rolling meadows, and you get to enjoy the calming sight of nature’s vibrancy all throughout. Make sure you take a look at the reflection of the Nandaghunti peak in the small pond at Ali Bugyal. Being Asia’s finest high altitude grassland, it is one of the most picturesque meadows you can ever find on a trek. Keep an out for the beautiful flowers like the Brahma Kamal. Named after Brahma, the Hindu god of creation, Brahma Kamal, is a rare find and is only found in the high altitude regions. It is beautiful and also happens to be the state flower of Uttarakhand.

Your trail will take you through dense forests of oak and Rhododendron. As you make your way through the forest, the gentle air of the mountain breeze as it flows through the rustling branches of the forest acts as a calming effect on any trekker. The peaceful ambience feels all the more musical as you can hear the birds singing and dry leaves crunch under your feet as you walk through the forest bed.

After the mesmerizing sights of nature’s beauty, after you climb your way to Kalu Vinayak, you hit the vast stretches of snow-covered terrain of the trek. It is another adventure as you walk on the icy patches of snow to reach the beautiful Roopkund. The white carpet of snow as your trail meanders through the rocky terrain during your climb is an experience every trekker love.

The climb to Junargali is not possible every time as the weather changes rapidly at such high altitudes, making it inaccessible. But, if you are lucky and you go get a chance to make the summit climb, the view Junargali is the ‘cherry on top’ for a trek that already has so many features. As you climb to the summit, on one hand, you have the thrill of standing on the razor edge of Junargali, and on the other- you have the mind-numbing view of Mount Trishul, with nothing standing between you two. The view is truly breathtaking as along with Mount Trishul, you have several other peaks covering up the horizon as they stand tall right in front of you.

There is a popular saying – “ In the mountains, the best view comes after the hardest climb.” Sticking true to that, after you make your climb to the Roopkund lake, it is beautiful in every way. With frozen bones that one can find on the edge of the lake, that has a story of its own, the mysterious lake feels like it's frozen in time. With chilling temperatures and snow-covered mountain terrain all around, the Roopkund Lake is a beauty of its own kind.