Trekking In Bangalore: Best Treks To Do in 2022

Trekking In Bangalore: Best Treks To Do in 2022

The city of Bangalore has become the most exciting destination for adventures, over the passing years. The mountains and rivers around the city provide many opportunities for adventurous sports. People are turning more to Bangalore these days, as the place allows you to perform numerous adventures at a single spot. Like the hills of Anthargange, gives you the chance to experience trekking with cave exploration, rock climbing, and many other activities. Bangalore has truly become the hub of thrilling adventurous sports like river rafting, dirt biking, trekking, parasailing, rock climbing, camping, etc.

It remains pleasant most of the time which attracts many people to the city. The weather invites many tourists and especially trekkers as the beautiful weather makes the trekking path easier. 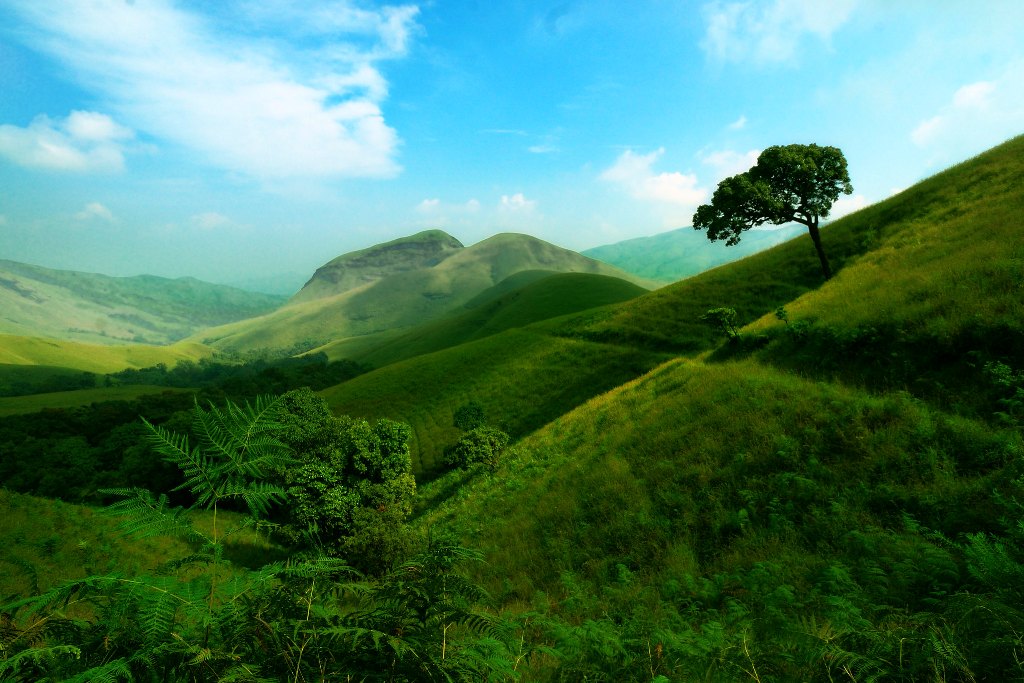 The best time to visit Bangalore for trekking, is winter, i.e., from October to February. The temperature normally lies from 15 to 18 degrees Celsius in days and nights of winter. The weather during this period of time is perfect for trekking or any other outdoor activity.

However, the monsoon season, i.e., from June to September is not really suitable for trekking in Bangalore as the weather due to heavy rainfall becomes humid. The trail path becomes slippery which can lead to injury.

In summers,i.e., from April to June, the average temperature during the day can raise as high as 33 degrees Celsius, and during the night it lowers to 26 degrees. The scorching heat of the sun in summers can make trekking more difficult and unbearable. Although it is the best time to enjoy river rafting or waterparks.

Skandagiri trek is one of the best night trekking places in Bangalore. It is an exquisite place to enjoy bonfire and camping during the night. The trek is located in Chikkaballapura village. You can take a bus or a cab to reach Chikkaballapura from Bangalore and then 15 minutes auto-rickshaw ride from there to reach Kalwara village which is the starting point of the trek. The distance of the trek is around 8km which can be covered almost in 5 hrs.

The path itself passes through a dense portion of shrubs and bushes which seems really mesmerizing. The flora and fauna are extremely rich during the monsoon. The difficulty level of the trek lies from easy to moderate although the trekkers have to be physically and mentally fit. The best time to go trekking over Skandagiri is from November to January, i.e., winter season.

Anthargange trek is the most unique trek near Bangalore. The hills are at a height of 1226m above sea level. It includes trekking as well as cave exploration. The trek is 65kms away from Bangalore near Kolar district. From the Kolar railway station, it is only 3kms far. The trekking route is around 3kms only and can be easily trekked in a day. You can visit many temples in between the path.

The route of the trek, in the beginning, is easy but it becomes moderate as you climb higher. This is the best place for a night trip and enjoying trekking and camping in Bangalore. Other than this, you can enjoy numerous adventurous activities like crawling, rock climbing, chimney climbing, rappelling, and many others. The best time to visit this trek is from October to March. 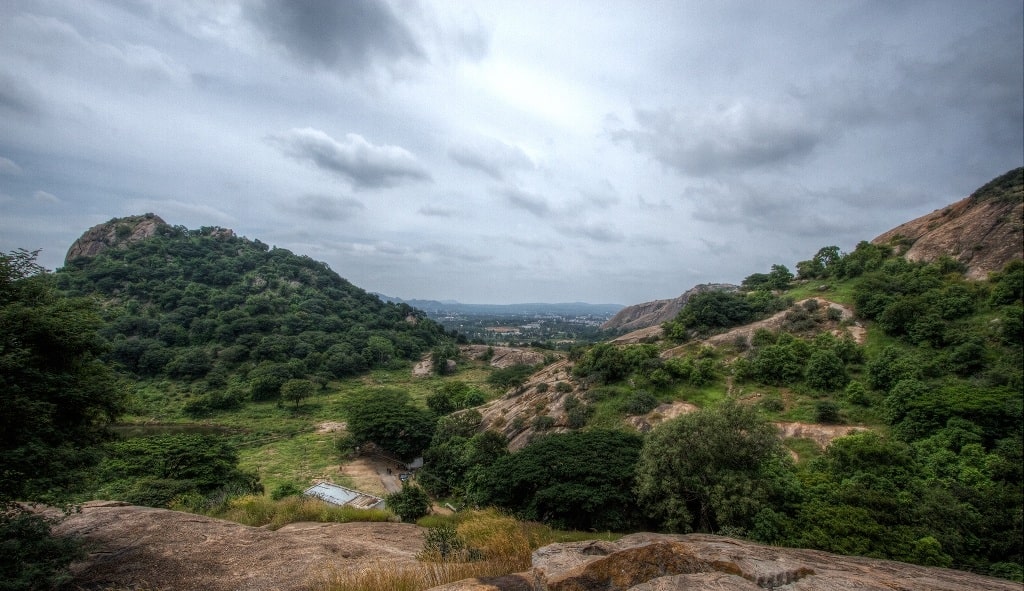 Ramanagara trek is one of the nearest trekking places in Bangalore. Due to features in Sholay movie, it is also known as Sholay hills. The trek is 50 km away from Bangalore on the Bangalore-Mysore highway. The trek route is around 6km and it takes 2hr for each side to complete the trek. The trek also provides adventures like rock climbing and night trekking. The difficulty level of the trek is quite moderate. The best time to visit the trek is from September to February.

Kabbaladurga trek is one of the trekking hills in Bangalore. It is at the height of 2090 ft. above sea level. The trek is approximately 70km away from Bangalore in Kabbalu village. The trail route is nearly 5 km and can be completed in around 2-3hrs. Beginners can also trek over it as the difficulty level is from easy to moderate. The months from September to February are the best for trekking in Kabbaladurga.

Night trek is also allowed over it which makes the trekking experience more exciting under the starry sky. 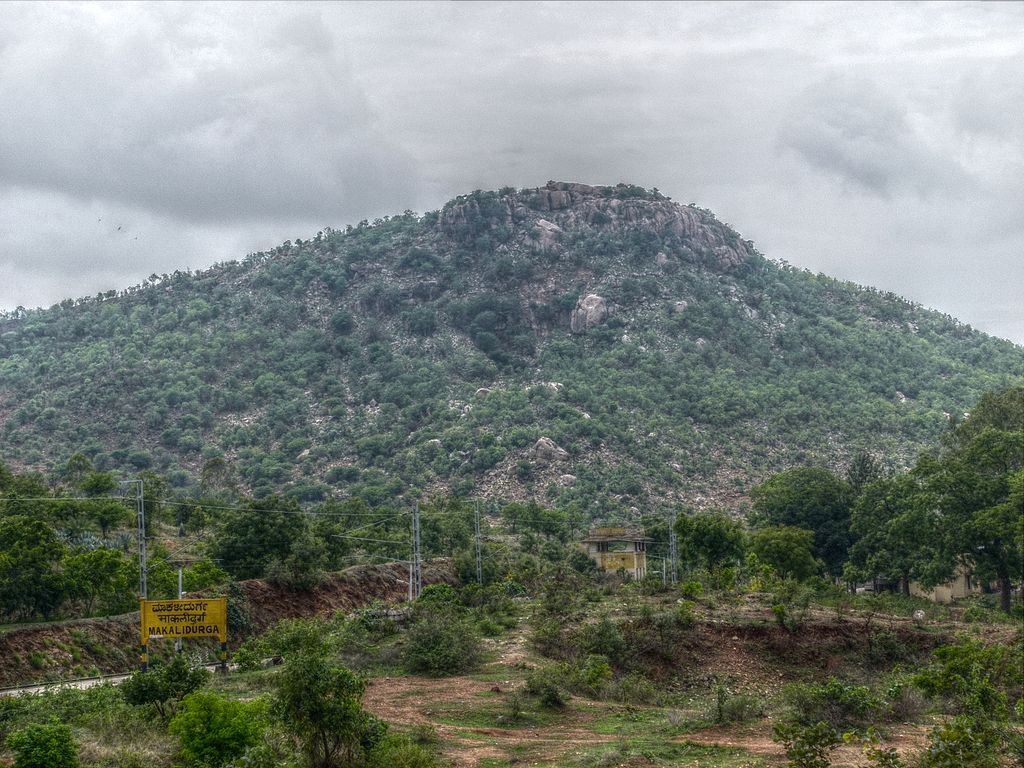 The Makalidurga Trek is the only trek near Bangalore which has a railway station at its base. It is 60kms away from Bangalore and easily accessible by road and railways. You can start the trek either by the temple of Muthurayaswamy or by Makalidurga railway station. The trail path is around 8km and can be covered almost in 6hrs. The rocky terrain makes the difficulty level of the trek from moderate to difficult. People mostly prefer night trekking over these hills to look at the beautiful view of sunrise from the top. The months from September to February are the best to visit Makalidurga trek.

The Bilikal Rangaswamy Betta trek got its name from the temple of Lord Rangaswamy which is situated at its top. The peak is at the height of 3780 ft. This trek is approximately 70km far from Bangalore. The trekking trail starts from Konala Doddi. The distance of the trek is 12km (both ways) and it takes nearly 4 to 5hrs to complete the trek. The top of the hill is covered with trees, shrubs, and bushes, making it greener. Beginners as well as experts, all can trek over this easy trek. This trek is perfect for every beginner to experience night trekking as well. The ideal time to enjoy this trek is post-monsoon time, i.e. from August to January. 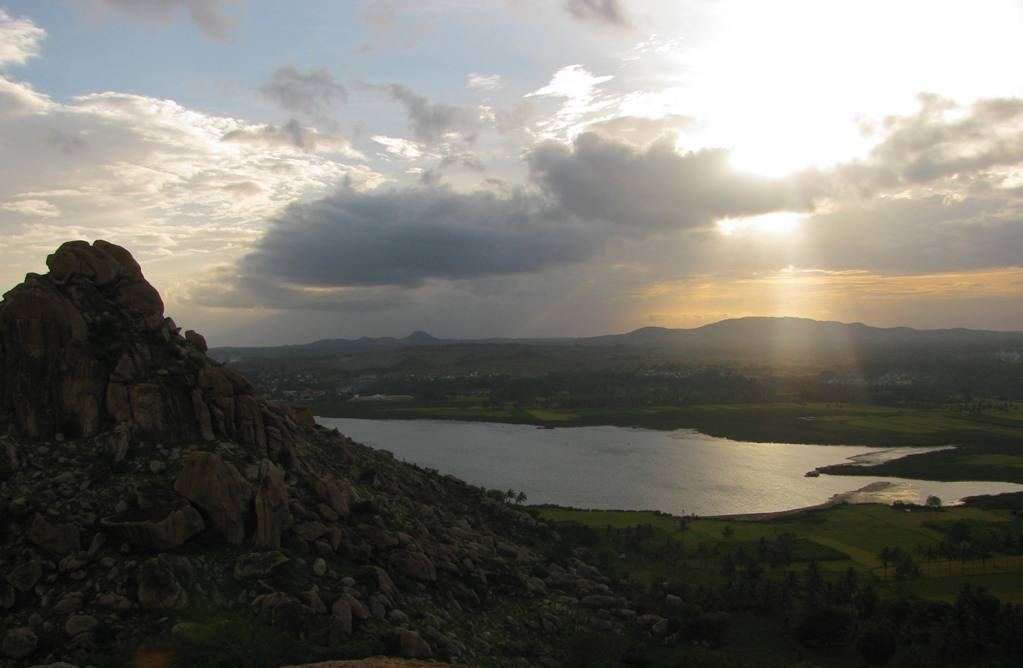 The hills of Kunti Betta are related to the mythological story of Mahabharata. It is believed that Kunti, the mother of Pandavas spent her 14 years long exile life here. The Kunti Betta trek is in Mandya district which is about 125 km away from Bangalore. The trek is nearly 5km long and it is perfect for a one day trip. It has moderate steep inclinations which makes the difficulty level from moderate to difficult. The night trekking over the hills gives you the chance to witness the beautiful sunrise from the hilltop. The best time to visit these hills is from October to May. 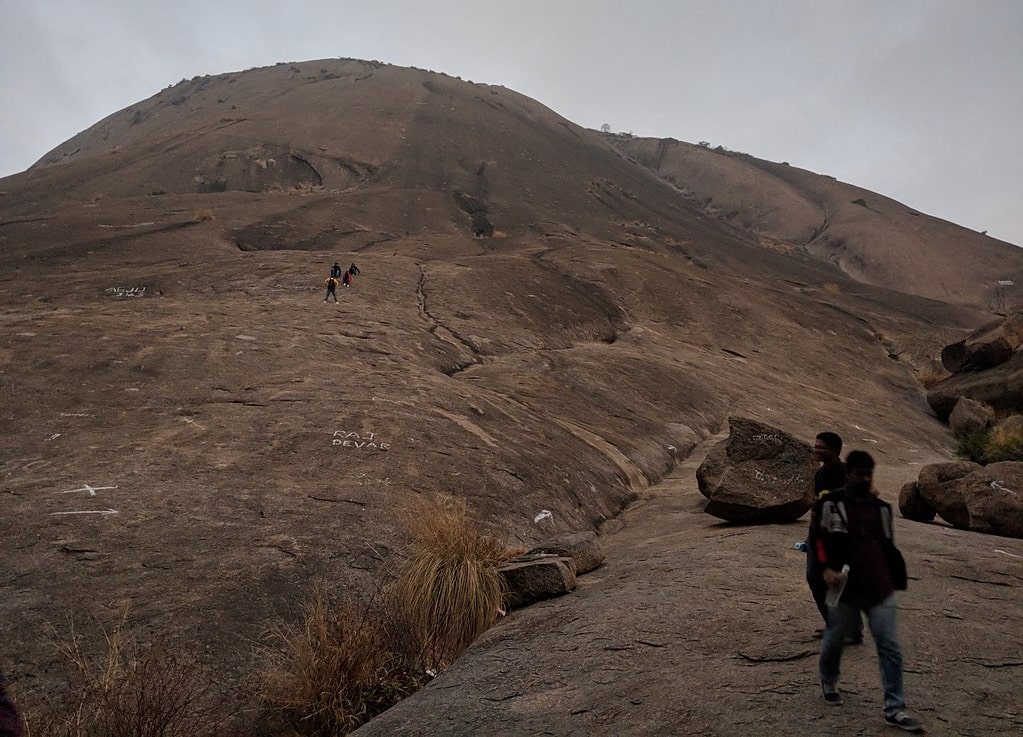 Savandurga Hill is the largest monolith (a large single block of rock) in Asia. It includes two peaks - Karigudda which is also known as Black Hill and Biligudda which is also known as White Hill. The trek is 60km away, in the west of Bangalore, off Magadi Road in Dabguli. The length of the trek is 5 to 6 km approximately which can be covered easily in one day. The trail is open and has very few trees. The scenery is beautiful once you reach the top of the trek where the Nandi temple is situated. Night trekking is also allowed over these hills. The hills are made up of granite rocks and have a moderate steep inclination. This inclination rises the trekking level from medium to difficult. The best time to visit these hills is from November to May. The weather remains cold here, in these months. Try to avoid trekking, in the months of monsoon as rainfall in monsoon makes the granite more slippery which can lead to accidents.

Nandi Hills is one of the best trekking places in Bangalore. It is 4700 ft. high above sea level. The trek is 58 km away from Bangalore Airport. You can take a cab or a bus to reach the spot. The trek starts from a road that leads to Nandi Hills, a popular destination. The length of the trek is around 1.5 km which can be completed in one day only. The trek is not much steeped and it is quite easy for every individual. It is the best trek for beginners and also safe for children. The trek is extremely rich in flora and fauna. People usually trek these hills during early mornings to see the sunrise above the clouds. It can be visited anytime throughout the year as the weather remains pleasant generally. Although the perfect time to visit is from September to February. Nandi hills provide many other adventurous activities also except trekking like paragliding, cycling, and camping. 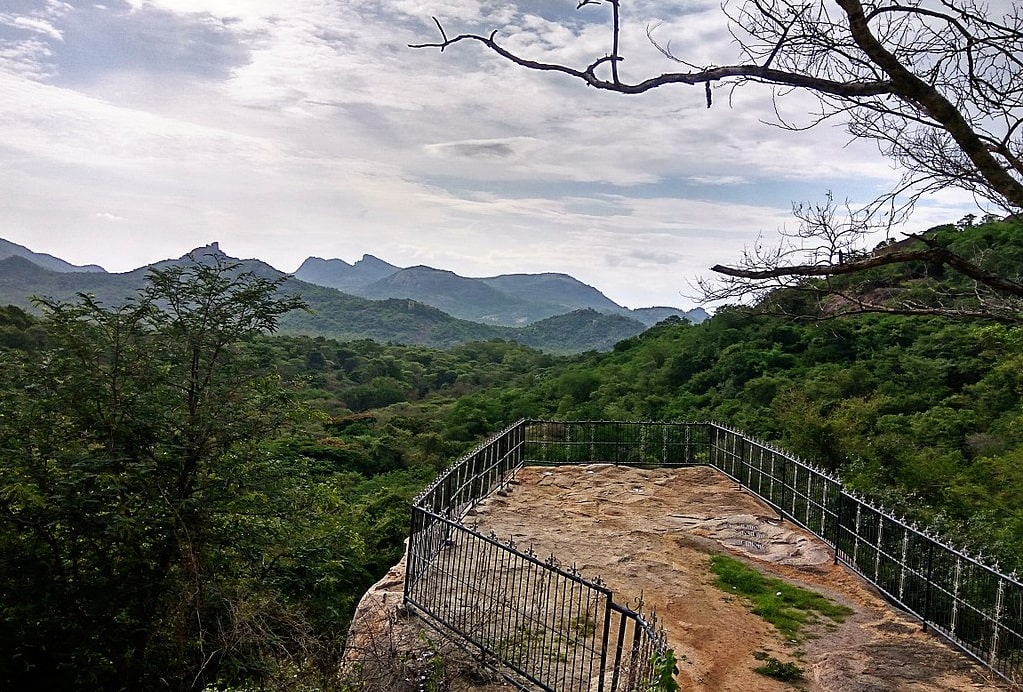 Devaraynadurga trek is a nearby trekking place in Bangalore. It is around 70km away from Bangalore. To reach the trek, you have to take national highway 48 out of Bangalore, on the Pune highway, Devarayanadurga is 15km away from here. It is at the height of 3940 ft. near the natural spring Naamada Chilume. The trail path is approximately 2 km and It is a perfect place for one-day trekking. During the trek, you get the chance to visit beautifully crafted Yoga Narasimha and Bhoga Narasimha temple. The trekking level is not very tough as well, it lies from easy to moderate. The ideal months to visit this trek is from November to February. 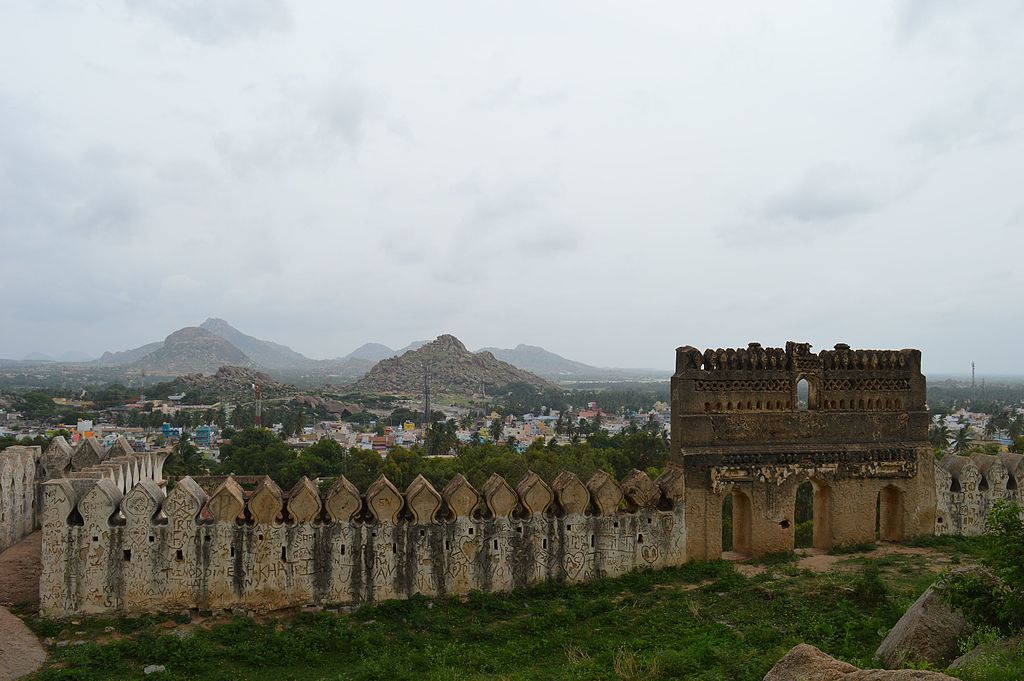 Madhugiri Fort (or the hill) is the second-largest monolith in Asia. The peak is 3930 ft. high above the sea level. The hill is in the Tumkur district and at a distance of 100km away from Bangalore. The place is easily accessible by public transport and it does not require any ticket. The distance of the trek is approximately 3km from each side and it takes two or three hours to finish the trek. The initial path of the trek is easy and it gets much difficult at the end. The later path of the trek is more suitable for rock climbing in comparison to trekking itself. This trek is definitely not for beginners. The best time for trekking in Madhugiri is from October to march i.e. the winter season with mild weather. 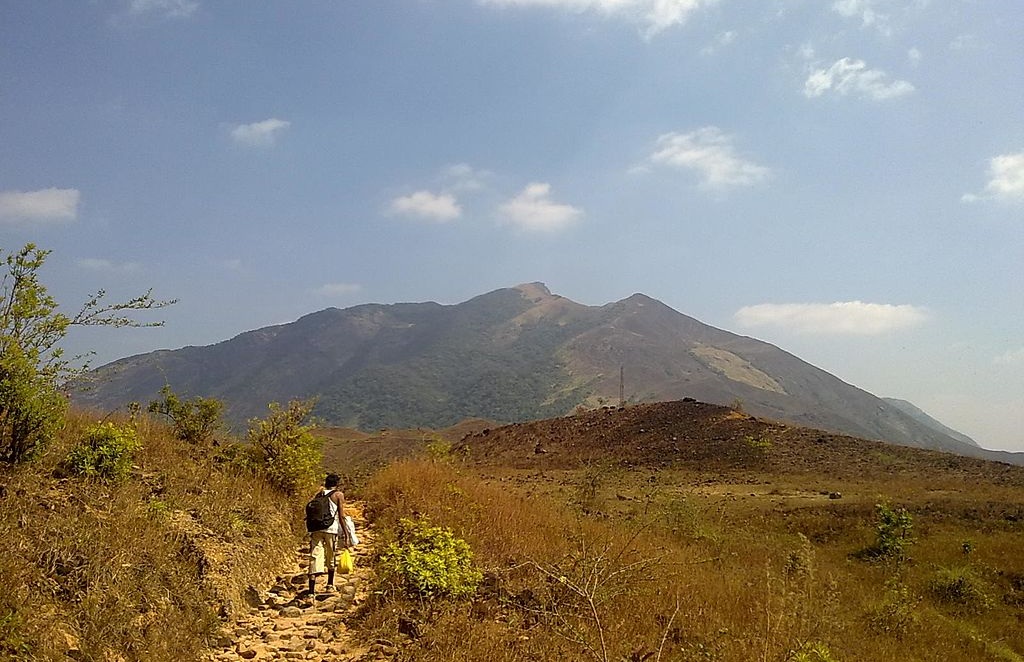 The Kumara Parvatha is one of the highest peaks in the Western Ghats. The trek is situated in the Pushpagiri Wildlife Sanctuary. If you are coming from Coorg, the best option to reach the trek is by taking a cab to Pushpagiri Wildlife Sanctuary. The trek is of around 22kms and starts from Kukke Shree Subrahmanya temple. It takes almost 2 days to complete the trek. The difficulty level of the trek is from moderate to difficult. As with every other trek, the perfect time to visit this trek is also winter season, i.e., from September to February. 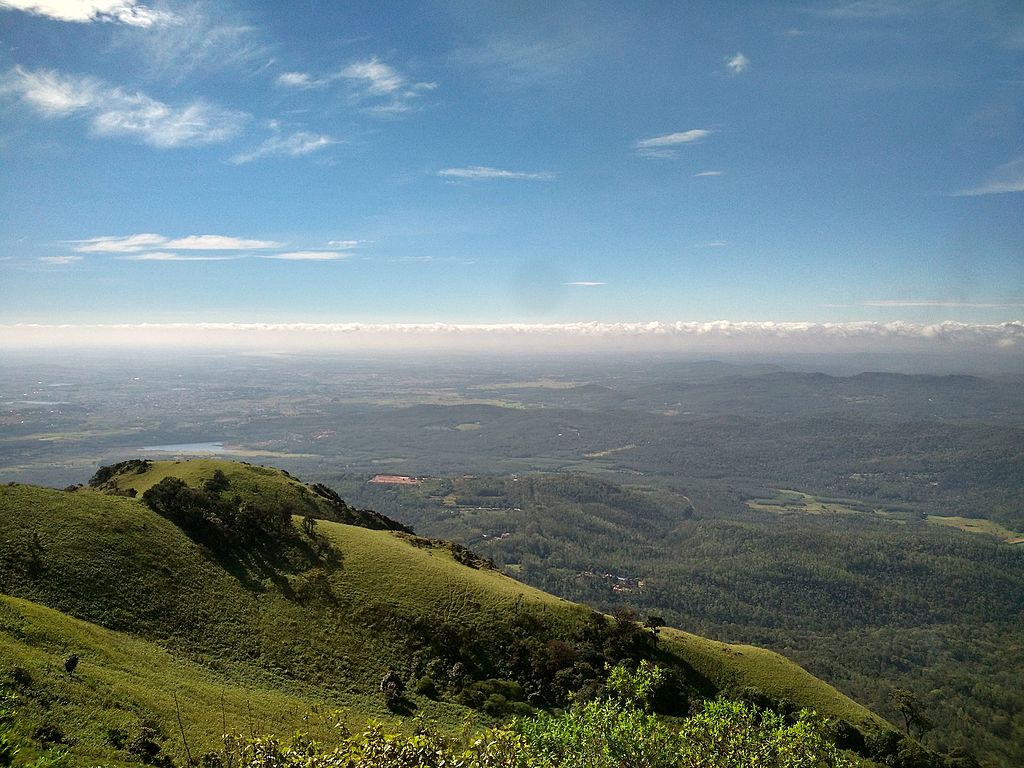 Mullayanagiri is the highest peak in Karnataka. It is situated in Chikmagalur which is 280km away from Bangalore. The starting point of the trek, Sarpadhari is further 15 km away from Chikmagalur. The distance from the starting point to the peak is nearly 3- 4km which takes half a day to complete the trek. You can see an explicit waterfall in the middle of the trek. The best season to go for trekking over these hills is winter but if you want to see the fresh greenery around, you can visit in monsoon as well, i.e., from June to September. 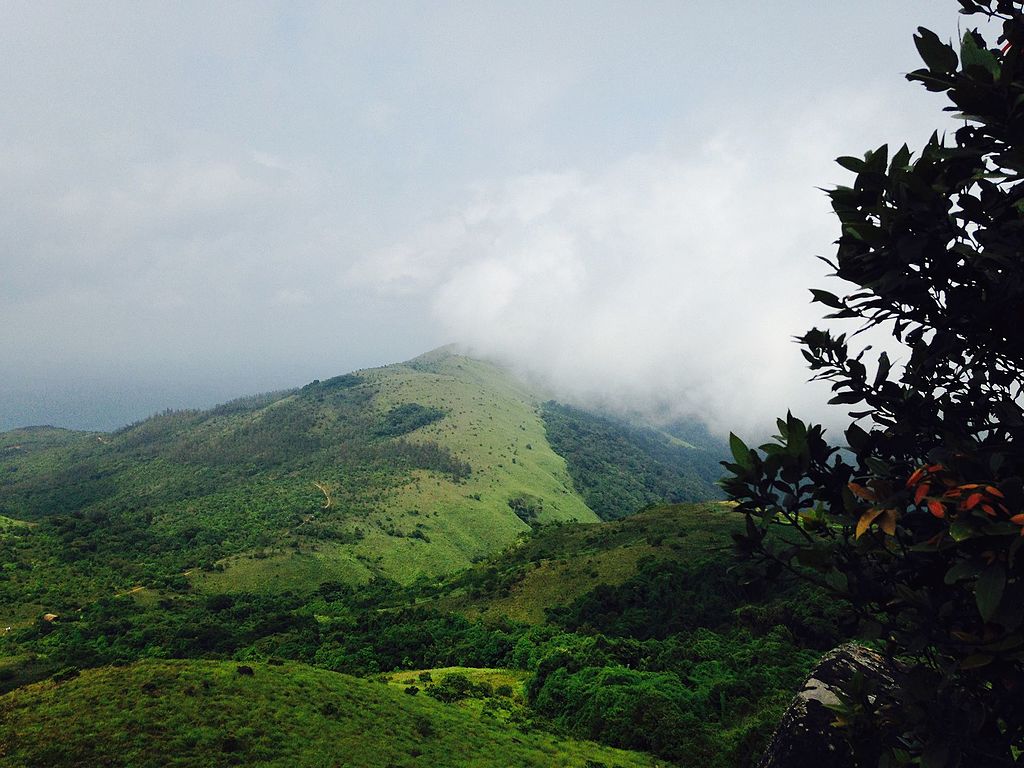 The peak of Tadiandamol is the highest in the Coorg district. It is at an altitude of 5735 ft. The trek is 274 km away from Bangalore in the village of Kakkebe. The distance of the trek is 16km approximately and it starts from Nalakanad Palace. You can either cover it in one day or extend it to two days by enjoying camping at the night. The trekking experience is wonderful here as it takes you to Shola forests with stream crossings. The difficulty level for trek lies from easy to moderate. The perfect time to visit Tadiandamol is from September to February.