The amalgamation of mystery, mythology, and adventure, Parashar Lake is a hidden gem of Himachal Pradesh. With Dhauladhar Ranges forming its backdrop the serene sight of the lake is what every heart needs to get rid of the tensions and worries of everyday life.

Parashar lake is situated 49 km north of Mandi, Himachal Pradesh, and sits at a height of 2,730m above sea level. The lake is 93% water which is mostly catered by glacial runoffs or rainwater. The remaining 7% is the mysterious floating island. The L circumference of the lake is 1.5 km which accounts for its area to be approximately 2.5 acres. Being surrounded by mesmerizing snow-capped mountains, the lake looks down upon River Beas and is also considered a symbol of natural beauty. The lake is situated at the highest place in Mandi district that also allows the sight of Sutlej River flowing towards the south. 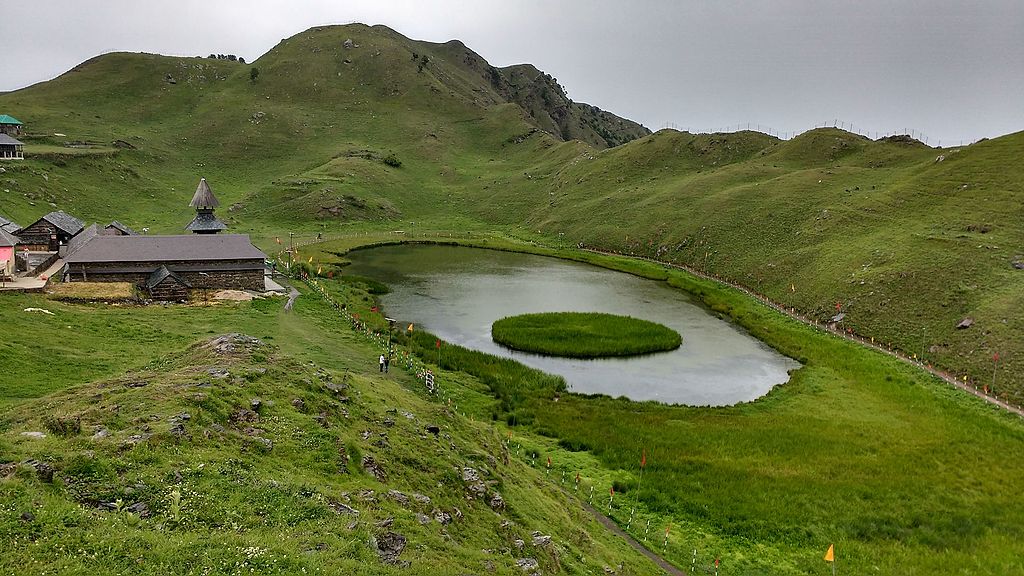 The floating island is one very fascinating characteristic of the lake. The island makes about 21% of the area of the lake while the remaining 79% is water, interestingly that is the same proportion that the Earth shares in respect of land and water. One fact that has been keeping the visitors on the edge is that the lake is believed to be the microcosm of the planet with the floating island being its axis of revolution. The island floats toward the east in the morning and reaches the west by the evening. The local residents go on to say that the time when the island ceases to float would be the time of catastrophe.

Folklores from the place lend different mythological as well as mysterious attributes to the place. One such folklore says that once it did not rain at the place and Sage Parashar prayed to Lord Ganesha who himself bought rain there. Since then whenever the place witnesses a lack of rain, the local people pray to Lord Ganesha and he himself descends to bring the rain. Apart from that it also believed that several God and Goddesses descend to bathe in the lake.

No one has been able to comprehend the mystery behind the floating nature of this island which makes it very intriguing and a wonder of nature.

The depth of the lake is yet not known even after many attempts by several experts from across the globe, which further adds to the mystery associated with the lake. The recurring failed attempts to explore the depth of the lake have also led people to the extent of calling it a ‘bottomless lake’. 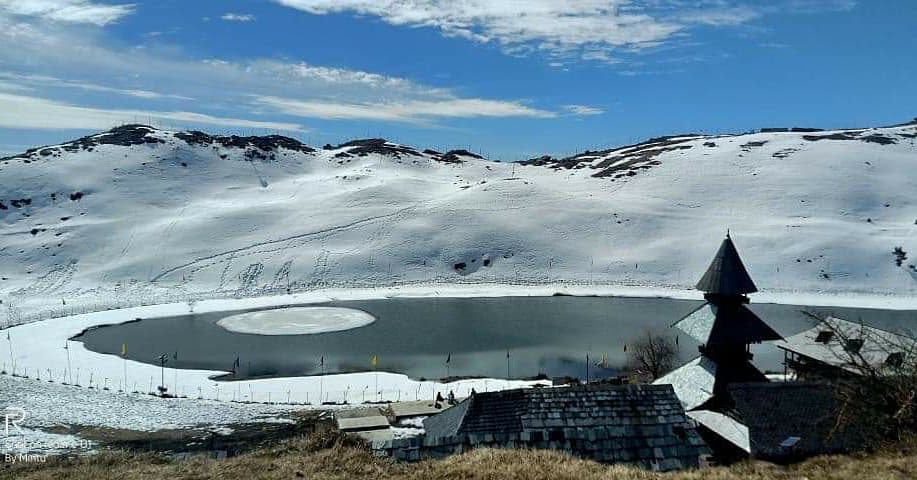 The legend associated with the place is another factor that attracts swarms of devotees from across the country to visit the place. The legend says that after the Kurukshetra war when the Pandavas and deity Kamrunag were returning, Lord Kamrunag found the place so tranquil and serene that he wanted to settle there forever. As a result of which Bhima ( the strongest of the Pandava brothers) rammed his elbow onto one of the mountains, creating a depression that is today known as Lake Parashar. The region later came to be known also as Kamru Valley, and the lake also as Kamrunag Lake after the deity Kamrunag.

There are two trek routes that are available to reach up to the Parashar Lake- one from Baggi Village and from Panarsa. The one from Panarsa is the more preferred due to the scenic beauty that it offers. Further the excellent road conditions throughout the year make it even more preferable.

Panarsa, located 60 km away from Mandi is easily accessible via road. From here, a journey of another 25 km via cab/taxi will bring you to Jwalapur village is the base camp for the trek. On your way to the village, you’ll witness plenty of apple orchards and free-flowing streams which becomes a heart-warming sight. From Jwalapur Village a trek of 8 km, lined with alpine forests brings you to the majestic Parashar lake.

The trail to Lake Parashar Lake is both serene and adventurous at the same time. While the dense Himalayan forest lends it serenity, its moderately steep and slippery climb makes it adventurous but worth it nonetheless. Initially, the ascent is easy but 15 minutes into the trek, the trail becomes moderately steep. The lush green meadows encountered on the way with the beautiful sight of snow-capped mountains make the journey even more worthwhile. Trekking for another 4-5 hours brings you to the much-awaited heaven-like majestic Lake Parashar.

How to Reach Prashar Lake

Bhuntar airport is the nearest airport to Panarsa, from here cabs can be taken to reach Panarsa. There are no direct trains that run to Panarsa from Delhi (considering it a general starting point), but the three nearest stations which have well-established connectivity include - Kalka ( 223km ), Ropar ( 253 km ), and Pathankot ( 204 km ). The roads are well constructed too and the connectivity up to Lake Parashar is well established.

The availability of buses makes the place very accessible. Direct buses to Bhuntar are easily available. The buses going Bhuntar take you to Panarsa as well, from where your splendid journey begins.

Things To Do Around Prashar Lake

Located at a distance of 13km approximately, Bijli Mahadev is one of the most sacred temples of Himachal Pradesh. The view from the temple located in the Parvati Valley is breath-taking further adding to its importance as a tourist attraction.

Dechen Choekhor Mahavihara Monastery, located at a distance of 8km, is situated in the Sarabai Village. Having been built in the 16th Century, the monastery offers a majestic view of the snow-covered Himalayan range making it a perfectly beautiful spot.

9.8km away from Parashar Lake is another abode for devotees – Kulanth Pith, which is one of the most sacred piths of India. It is believed that the mightiest of all, Lord Shiva stayed there for some time as well. Vishnu Kund situated at the place has its own religious significance and it is believed that bathing in the kund washes away one all sins.

Although it is located at a greater distance of 105 km, Bir Billing is a must-visit place for every adventure enthusiast who visits Parashar lake. The paragliding capital of India near Lake Parashar allows you to experience adventure sport around Lake Parashar. The journey to Bir Billing takes 3-4 hours but the heavenly experience of paragliding that place bestows you with makes it worth every second. 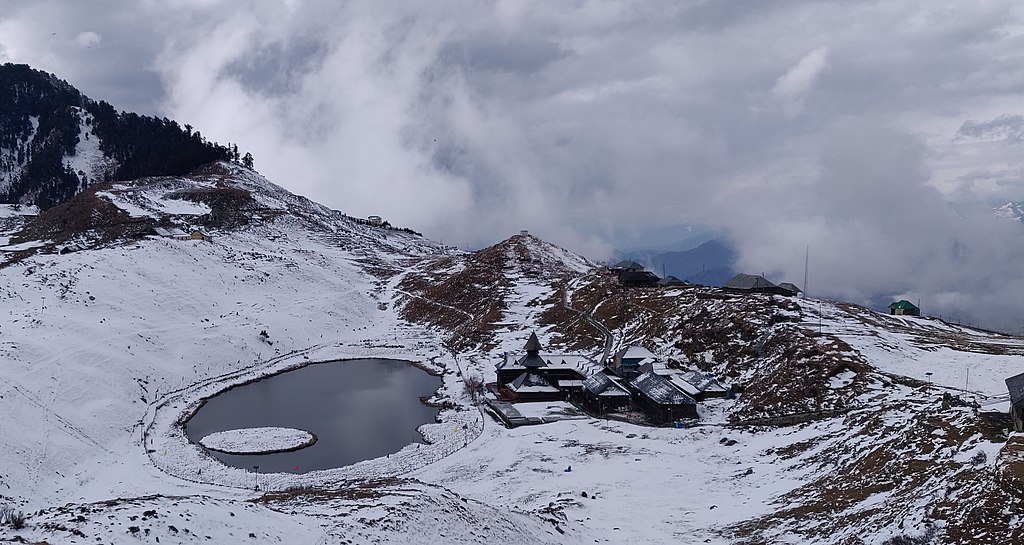 Lake Parashar is a place with which its tranquillity demands you to take off your baggage of worries and absolutely relax yourself walking sake.

Different people visit the Lake in a different season as what suits them. While some people prefer to have an easy and safe journey in the summer months from March to May with the sight of lush green meadows other prefer taking up the adventurous journey in the winter months from December to Feb when the lake is almost frozen and the whole land is covered under the sheets of snow. Mostly winter months are more preferred because of the awe-inspiring sight of the blanket of snow that the whole place is covered in.

The months from June to August are not much recommended due to safety threats associated with the monsoon season.

The untainted and raw beauty of the Lake Parashar, nestled in the intriguing mystique land of Himachal Pradesh is undoubtedly something that can make every heart feel alive.