Bagini Glacier: A trek through the Nanda Devi National Park

Bagini Glacier: A trek through the Nanda Devi National Park

Written by Meenakshi on 13-Aug-2020
Read About Author

Bagini Glacier is located in the Nanda Devi National Park, Uttarakhand. It is at an elevation of 14,816 feet from sea level and offers spectacular views of the lofty Dunagiri (7,066 m), Changa Banga (6,864 m), and Kalanka (6,931 m) peaks. The glacial trek starts near the base of Trishul and Changabang peaks and flows northwards. Flora and fauna are abundantly present in this region. In 1988, UNESCO classified the Nanda Devi National Sanctuary as a World Heritage Site. The Bagini Glacier is one of the most beautiful glaciers in the Himalayas and provides a wonderful adventurous trekking experience. The trek starts from Joshimath and reaches Ruing village via Jumma. The route that leads to the spectacular view of Hathi Parbat, Ghori Parbat, and Bhumial God temple has winding trails through a forest. There are innumerable lakes and grasslands all along the terrain which makes the trek visually appealing. It is an ideal destination for a travel enthusiast with fresh air and scopes of adventure. 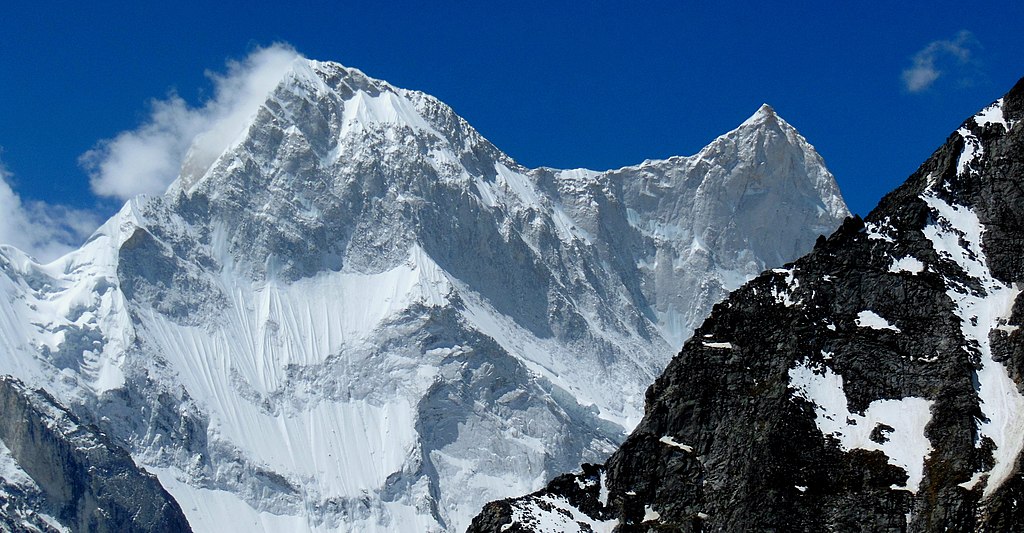 ABOUT THE BAGINI GLACIER TREK:

HIGHLIGHTS OF THE BAGINI GLACIER TREK 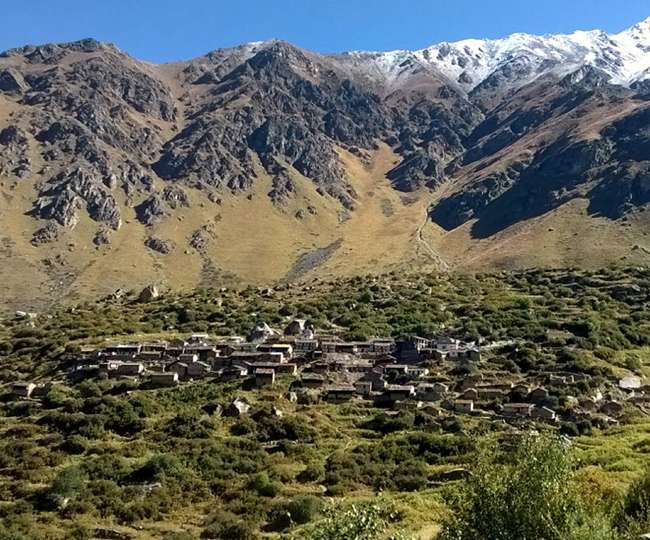 The history of the Dronagiri village goes back to the time of Ramayana. It is believed that Shri Hanuman had lifted the hill of Dronagiri village when he was required to collect 'Sanjeevani Booti' to resurrect Lord Laxman. The villagers enact Ramayana during festivals but only up to this scene. The warm and welcoming nature of the Rongpa people, close interaction with the local life, their daily struggles and methods of cultivation; enhances the quality of the trek.

How to Reach Bagini Glacier

Jolly Grant Airport is the nearest airport. It is located about 48 kilometers from Haridwar. Traveling to Haridwar from Delhi is very convenient, as it has regular flights.

The major cities like Delhi, Mussoorie, Mumbai, Varanasi, Lucknow, and Kolkata are well connected to Haridwar.

From Kolkata – Doon Express and From Mumbai, Chennai – Dehradun Express

Haridwar is well connected with most of the major cities by road. The NH45 makes the connectivity to Haridwar easier. NH58 that connects Delhi to Mana Pass, passes through Haridwar linking it with Ghaziabad, Meerut, Badrinath, and others. NH74 that starts from Haridwar connects the district with Kashipur, Kiccha, Nageena, Bareilly, and Pilibhit.

Buses are available on a regular basis from Delhi for Haridwar from Delhi’s ISBT Kashmere Gate.

However, the best route to take for Bagini glacier trek is via Joshimath.

The best seasons to do trekking on Bagini Glacier are summer and autumn. From early May to mid-June and from late September to mid-October are considered to be the suitable months. The region is surrounded by beautiful snow-capped peaks during this time and the climate is moderate. Monsoon season should ideally be avoided for any trek.

In summer and autumn, the weather at Bagini Glacier is soothing and moderately cold. From April to June, the temperature is between 15 and 20 degrees Celsius during the day and at night it comes to the lowest of -2 degree Celsius.

From September to October, the temperature stays between 15 to 10 degrees Celsius during the day and at night it varies from 5 to -5 degrees Celsius. The weather is relatively colder after monsoons. Snowfalls occur during winters.

How Difficult is Bagini Glacier trek

The level of difficulty of the Bagini Glacier Trek ranges between moderate to difficult. The route of the trek has narrow trails with rocks and boulders, which makes it slightly difficult for beginners. Concentration is very much needed as the rough trails can be really dangerous. The maximum altitude of the trek is 14,816 feet. Regular exercising and eating healthy will ensure that the trekking doesn’t cause over-exhaustion.

It is normal to be scared and anxious before your first trek. The level of difficulty for the Bagini Glacier Trek is moderate, so the route is not very dangerous. The amount of physical fitness required is also not very high. But, it is always advisable to check the BMI before enrolling for a trek. Staying attentive while trekking ensures safety. However, Moxtain Pvt. Ltd. always provides it’s trekkers with professional guidance and supervision. Your safety is our utmost priority.

To travel from Haridwar to Joshimath, it usually takes 9-10 hours by car. The distance required to cover is 275 km. The altitude gain is 5121 ft. The road trip comes with amazing views of the surroundings. There are shops on the way, so water will be easily available. There are various places that come along the way, such as Laxman Jhula, Dev Prayag, Rudra Prayag, etc. Beautiful valleys, sparkling rivers, and hills surround the meandering roads. The journey is nothing less than a visual retreat. Breakfast and lunch on the way. Accommodation in the guest house.

The trek starts from Jumma which is an hour ride from Joshimath. It takes an hour to cover 45 km and reach Jumma from Joshimath via Auli road. We then trek 3km to Ruing village and gain an altitude of 810 ft. It takes 2-3 hours of trek to reach the Ruing village. Water is to be carried. The roads are partly uneven. Many villages fall on the route. In between Suraithota village and Jumma, the road is on par with the Dhauliganga river. The afternoons are showered with a cool breeze as Jumma is near the Tibetan border.

The trail begins with a steel suspension bridge over the Dhauliganga, marking the ascent of Ruing. The road to Ruing is slightly steep through the forest. It takes around 2-3 hours to cover the distance. Staying at the Panchayat Ghar is advisable. If not, we hike further 2-3 km from Ruing and arrive at a small grassland before the ascent of Dronagiri.

Staying here reduces the distance to Dronagiri and saves time for the next day. There is also a natural stream nearby which offers a beautiful view.

It takes 5-6 hours of trek to cover 8 km and reach Dronagiri. The altitude gain is 2657 ft. The trail is similar to that of Jumma to Ruing. Water is available at the campsite. We leave Ruing and start trekking through the meandering roads of the forests, with little or no sideways. At a distance of about 3.5 meters from the Campsite, the landslide zone begins. There are two visible trails here. The upper trail is a remnant of an old trail that linked it to the village previously, so we won’t be taking this trail.

The downward trail is full of dust and sharply inclined at an angle of 60° to 70º to the horizontal. Mudslides and pristine clean streams accompany you all the way to the top. A well-constructed sidewalk leads to the village, once you reach. The view from this place is spectacular as the Hathi and Ghori Parbat peaks are covered with snow. The valleys are adorned with vibrant flowers during summers. We camp on the outskirts of the Dronagiri village. You can also visit the Bhumial Temple nearby.

It takes 3 hours of trek to cover 3 km and reach Loungatulli. The altitude gain is 620 ft, and the route lacks greenery. Drinking water is easily available as Bagini Glacier is nearby. We leave Dronagiri and arrive at a winding path which leads us to a high ridge from where the Rishi peak and Bagini Nala are first visible. The bridge of Bagini Nala comes after thirty minutes of leaving the village.

The trail after the bridge takes a meandering turn upwards. The path is filled with boulders and rocks, and no sight of vegetation. We reach a stream surrounded with patches of greenery after 1.15 hours. Continue an hour more and reach the campsite of Longatulli. We camp for the night.

The distance from Loungatulli to Base camp is 5 km and it is 3 hours of trek, and the altitude gain is 2244 ft. It takes 45 minutes more to reach the Advanced Bagini Campsite, which has a relatively better view. Water is available at the campsite, but there are no shops on the way. After breakfast, we will start our trek for Base Camp. We reach the Bagini lower base camp after a proper 3 hours hike on a rough track from Longatulli. The campsite is a plain plateau. The splendid views of Satminal, Hardeul, and Rishi Pahar is bound to leave you astonished at this point. The Bagini main base camp is further up the mountains. We can either camp here or in a better place which is 45 minutes away.

The Advanced Bagini Base Camp offers beautiful views of the peaks and is ideal for camping. The route is not properly marked.

One needs to concentrate and focus on the road to follow the trail accurately. Few signs like a group of small stones arranged on top of one another are made for the convenience of fellow trekkers to help them navigate better.

The total distance to be covered is 10 km and the altitude gain is 103 ft. The route gets difficult as we proceed towards the glacier. We return back to the Base camp. Water is available at the campsite, as well as on the way. We leave early to experience the sunrise from Changabang base camp. The distance between the two base camps is around 3-4 km. The route from the Advanced base camp to the Changabang base camp is an upward trail.

The road is full of glacial deposits, and crevasses can be spot on the Bagini Glacier.

The distance from the Base camp to Ruing is 18 km, and it is a trek of 10-12 hours. We follow the same route that we took to reach the Base camp. Descend for around 18 km via Longatulli to arrive at Dronagiri and later at Ruing village. We camp here for the night.

We start in the morning, take a descent of three hours to Jumma, and then drive to Joshimath. Overnight stay in a guest house. To cover 3 km from Ruing to Jumma, it takes 3 hours of trek. We drive 45 km more to reach Joshimath. The drive is for an hour.

Haridwar is a drive of 9-10 hours from Joshimath. Transportation will be provided.

Written by Meenakshi on 13-Aug-2020
Read About Author