Hampta Pass Trek, Manali: All You Need To Know!

Hampta Pass Trek, Manali: All You Need To Know!

Written by Anwesha on 07-Jul-2019
Read About Author

"A walk in nature walks the soul back home."

Trekking is not just an adventure activity, it is a state of mind. It is giving in to the call of the mountains with every dauntless step taken in unknown, unpredictable terrains. And for every such person who loves to keep coming back to the lap of nature, answering the call time and again, the state of Himachal Pradesh is quite a dreamland. 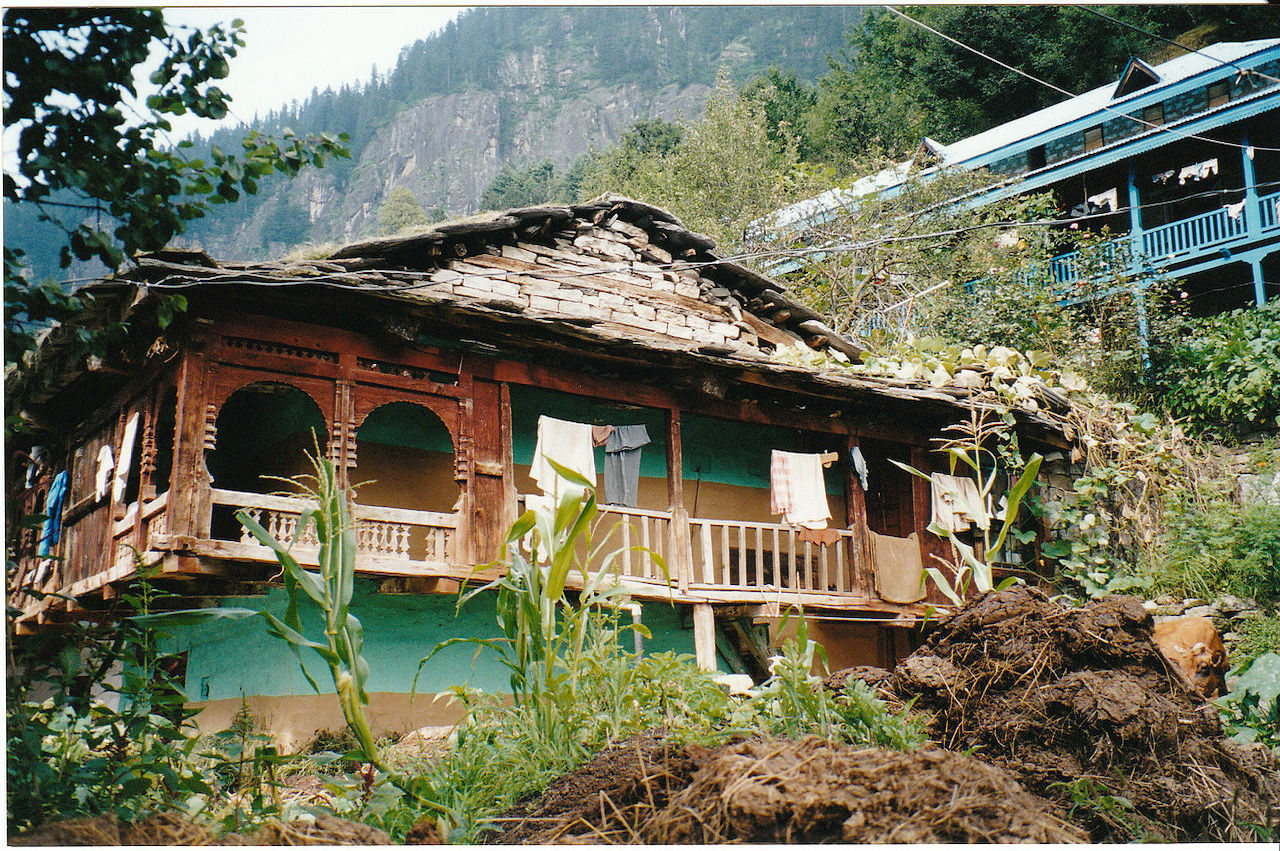 Himachal Pradesh is home to a number of stunning trekking trails, thanks to the presence of a good many Himalayan peaks within its boundaries, thereby earning it a name that means 'the land of snowy mountains'. Tucked in between the vast valleys of Lahaul and Kullu in the district of Spiti, Hampta Pass Trek is among the most famous trails in Himachal, and also one of the most convenient ones for trekkers of all levels to enjoy.

Over a duration of 4-5 days, Hampta Pass Trek is all about exploring the sheer poignancy of the Pirpanjal Range of the Himalayas. Despite being a short and comparatively easier trek in and around Himachal Pradesh, Hampta Pass Trek fills the adventurous heart and feeds the wanderer soul like few others. Here are the basic details of the trek before you get to the highlights of it.

The Story of the Trek 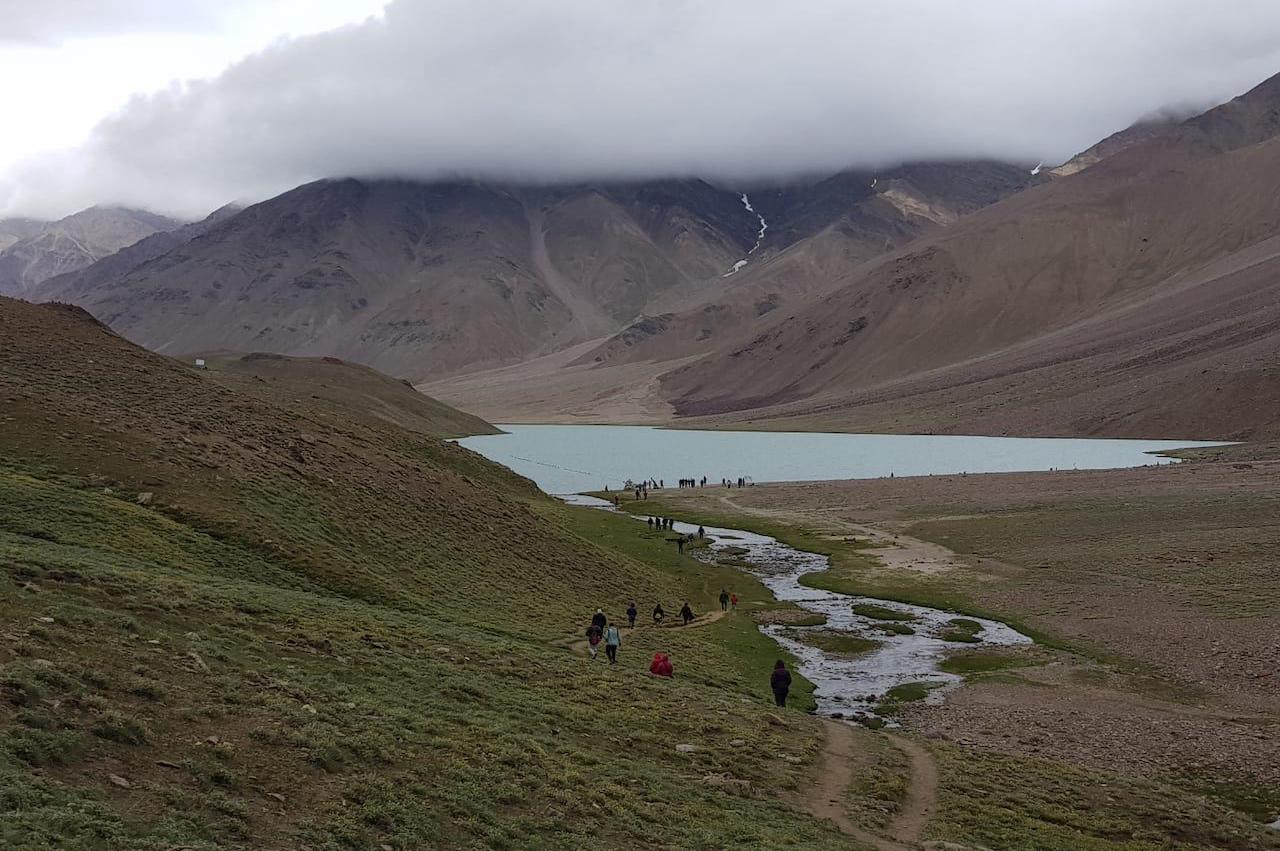 Hampta trek is not about the adrenaline rush, neither is it about crossing difficult hurdles to reach a destination, as it often is with many Himalayan treks. It is more about basking in the beauty of the journey itself. The chief appeal of Hampta Pass trek lies in its variety of landscape - once you start on the trek, it will take you through an overwhelming criss-cross of beautiful landscapes. From the forests of conifers to Chika, to the lush green grasslands and then sandy, rocky plains on the way to Balu ka Ghera to the steep, snowy land during the final part of the trek and then descent to the campsite at Shea Goru - the terrains of the trek will keep you mesmerized. 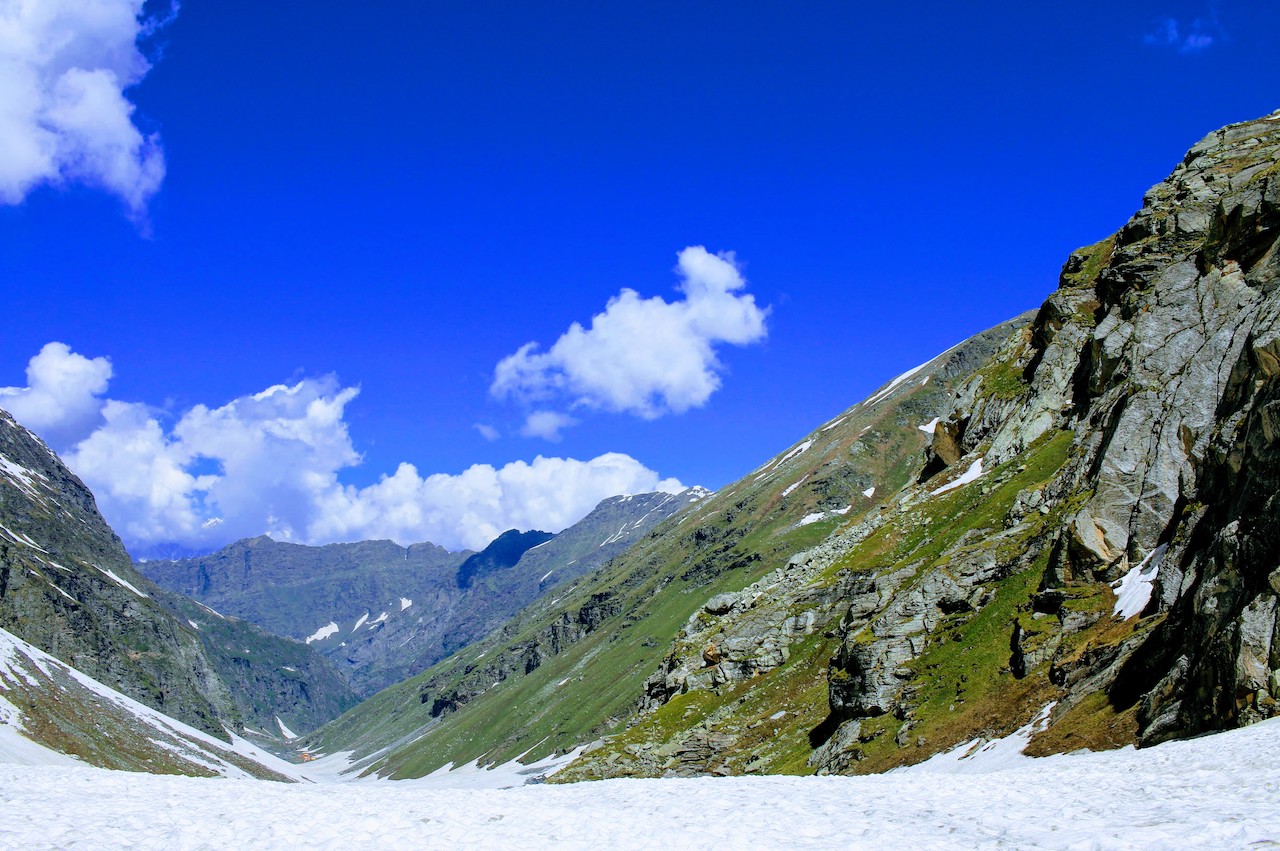 At every turn and bend of the Hampta Pass Trek, there are delightful surprises of the nature awaiting for you to explore. The trek starts off from Manali, which in itself is a beautiful hill station to get the journey started. But the first part of the trip can be made by car. It takes around 2 hours to reach from Manali to Jobra, which is the base camp for the Hampta Pass Trek. The road trip features around 42 hairpin bends and spectacular views of the pretty-as-a-picture Kullu Valley. At every twist and turn, Kullu presents itself in new bouts of natural beauty - with high peaks crowned with sparkling white snow reflecting the sun's rays nestling the valley and the Rani Nallah River, flowing right along the meandering roads leading up to Jobra from Manali. 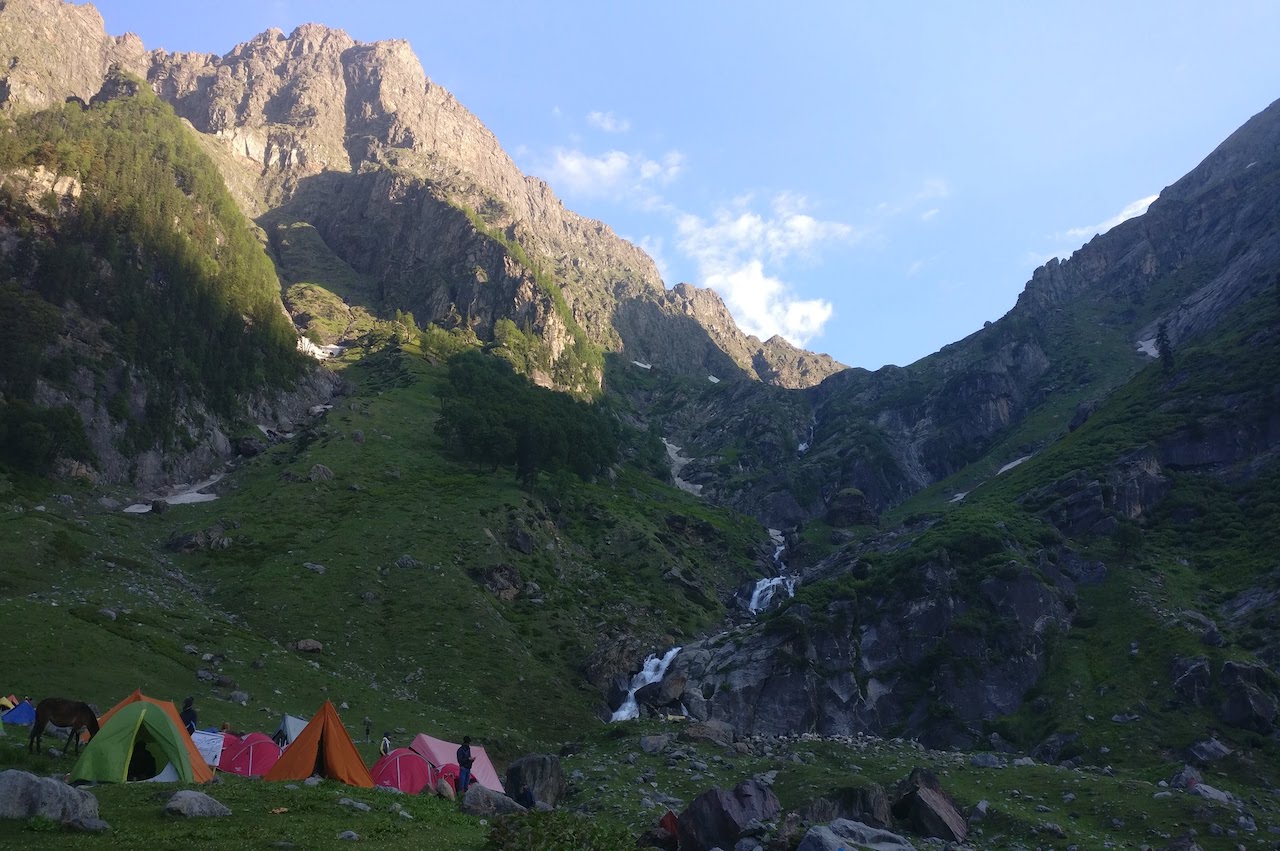 Chika is the first campsite of the trek, and the trail taking you from Jobra to the camp is dotted with thick woods of pine, bright green maple and sparkling silver birch trees. The campsite itself is an open picturesque meadow amidst mountains on all sides and by the bank of Rani Nallah. The night spent in Chika will probably be one of the most memorable ones of the trek, spent sleeping under the starlit Himalayan skies. 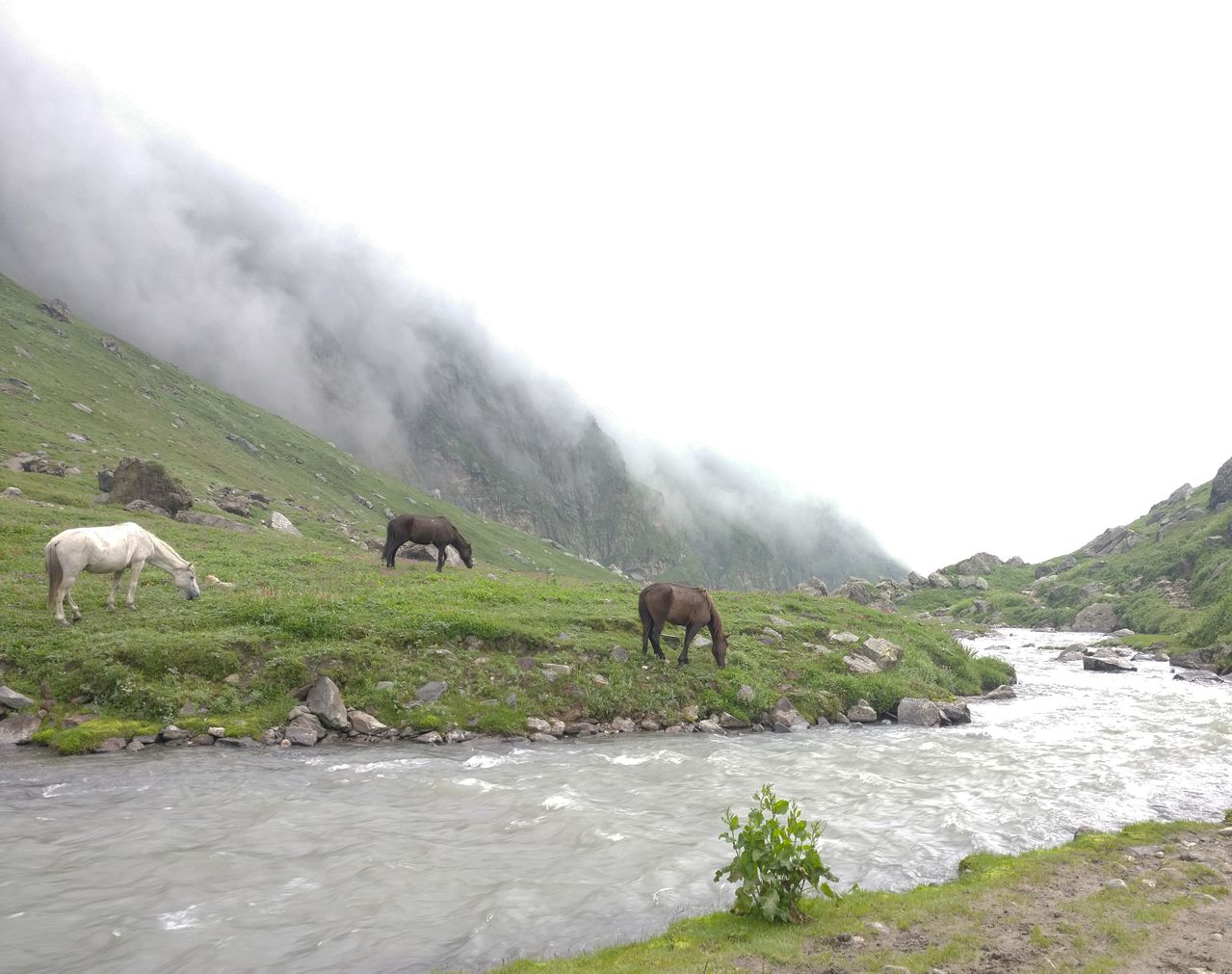 In the next part of the trail, it is almost like nature has taken up a challenge to bewitch anyone who travels by this way with its enthralling charm. You pass through green pastures for the first half of the trek to Balu ka Ghera from Chika, and if you are in luck, you can see mountain cattle grazing the fields in their own, leisurely mood. Against the misty, mountainous backdrop, this scene creates quite a postcard-worthy shot. 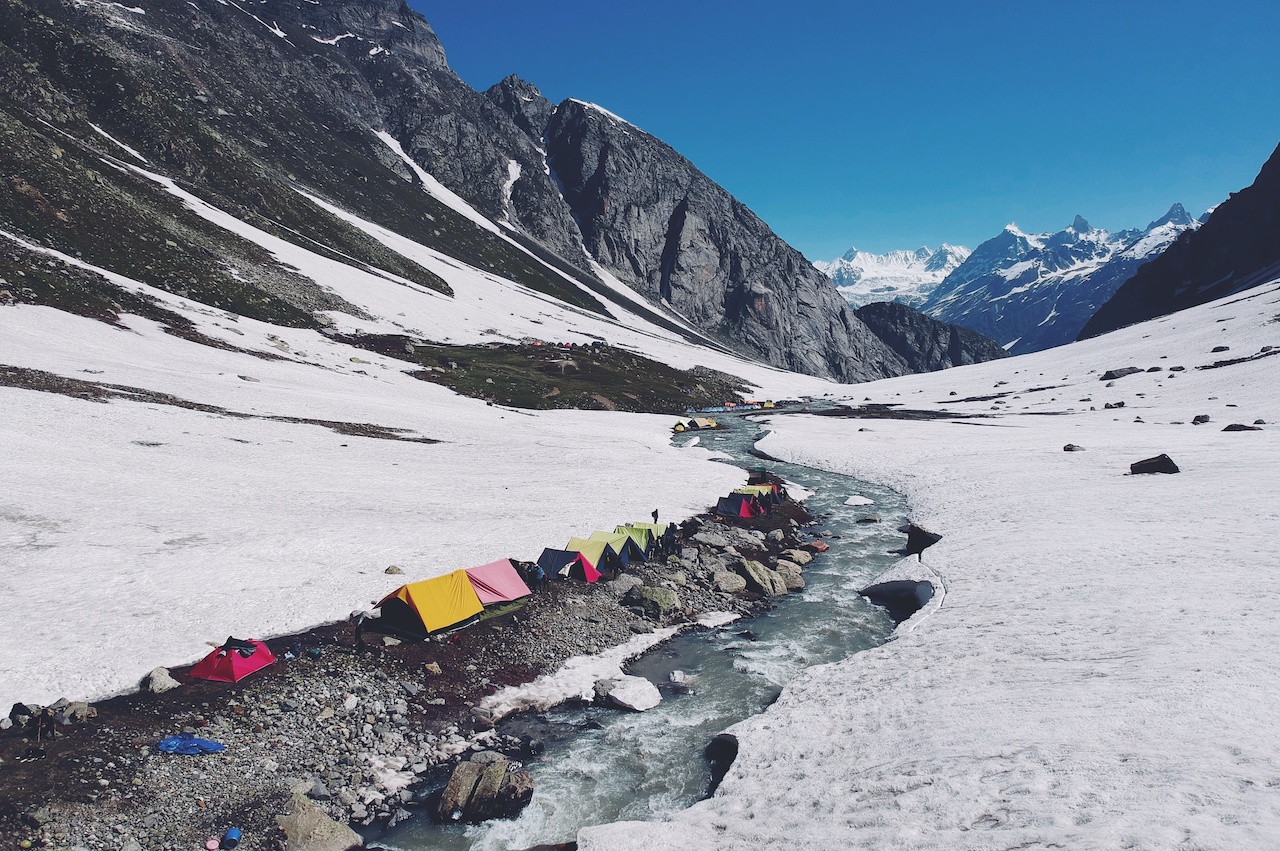 After you cross one of the streams with icy cold water that diverge from Rani Nallah and flow through the grasslands, the landscape changes spectacularly. The green grass beneath your feet changes to sand and stones, true to the name of your destination. 'Balu' means sand, and as the land starts to get more and more coarse, your campsite for the day gets nearer. But on the other side of Rani Nallah, the banks are covered with a wild outgrowth of rhododendrons at the foothills and birch trees higher up the slope, much to the contrast of the barrenness over your side of the river.

After a night's rest at Balu ka Ghera, the hardest patch of trekking awaits you in the morning. It starts off with a slight gradient, but soon you come across a shallow lake and it takes off, transforming into a snowy stretch of an uphill climb. For the lovers of all things adventurous, this part of the trek is perhaps the most exciting one. The gateway to Hampta Pass Manali will come into view after crossing two sharp ridges and the view from there will simply leave you speechless. Pirpanjal creates a panoramic frame around you, with the majestic, snow-clad crown of Mount Indrasan standing tall and proud amidst it, justifying its moniker after the God of Thunder. Peeking from behind it is Deo Tibba peak, the abode of God.

The look of the mountains and the vast Lahaul valley tucked in between the folds of Himalayas poses quite a transcendental setting. It is not only rewarding of the exhausting trek but also makes you feel insignificant and empowered at the same time. 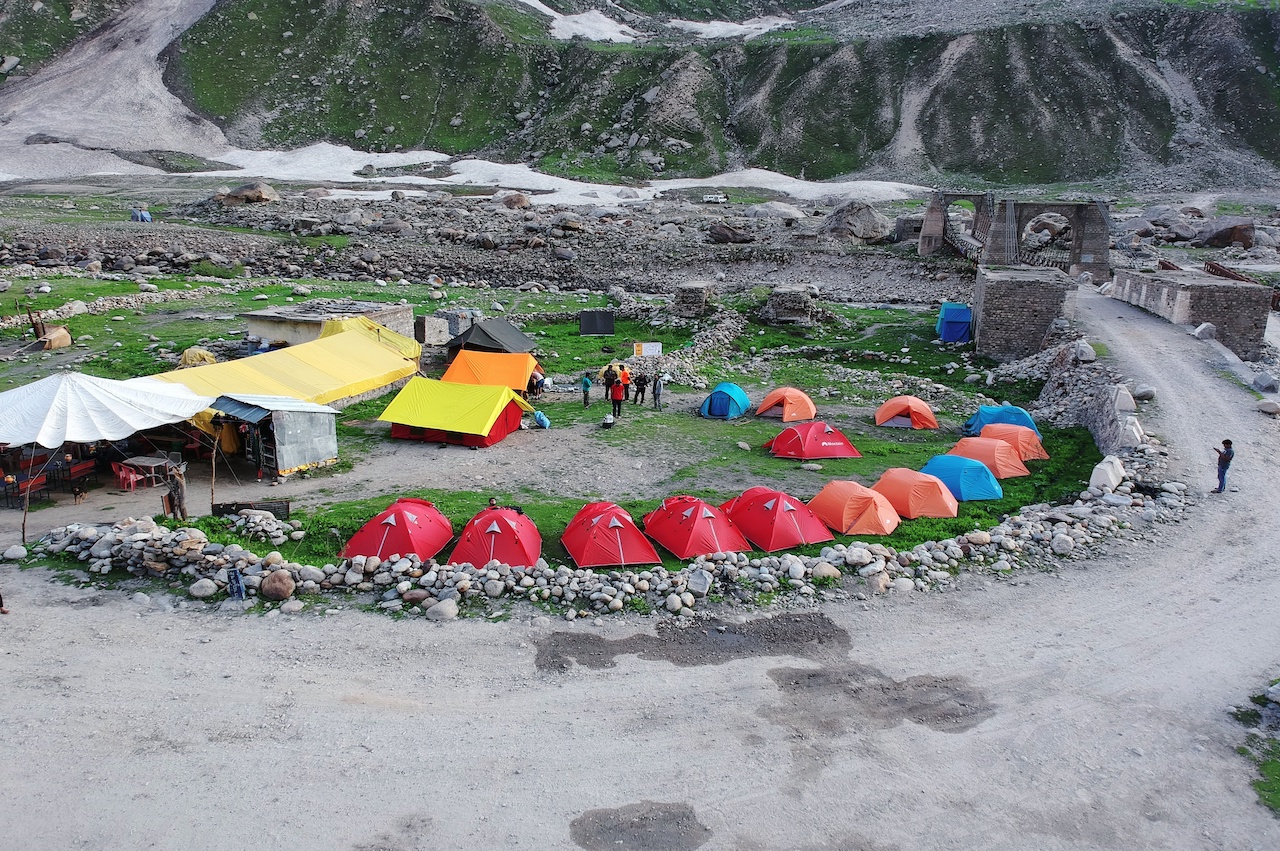 Over the next two days or so, you will feast your eyes on more such marvels of the mountains. Once you go through the descent from Hampta Pass to Shea Goru, the terrain gets easier once again with rocky pathways. Before your excursion to Chandrataal Lake and further descent to the last campsite at Chhatru, you will have to cross yet another chilled stream of water at early morning. But it is rather a fun thing to do with the team, given the trek would be coming to an end and what you accomplished together on it.

The best time to go for Hampta Trek is from May to October. During the other half of the year, the whole regions stay covered in snow and experience sub-zero temperatures, and for obvious reasons sustenance becomes difficult. If you go during May-June or September-October, you might get to see a little bit of snow. August is the sunniest month in Spiti. 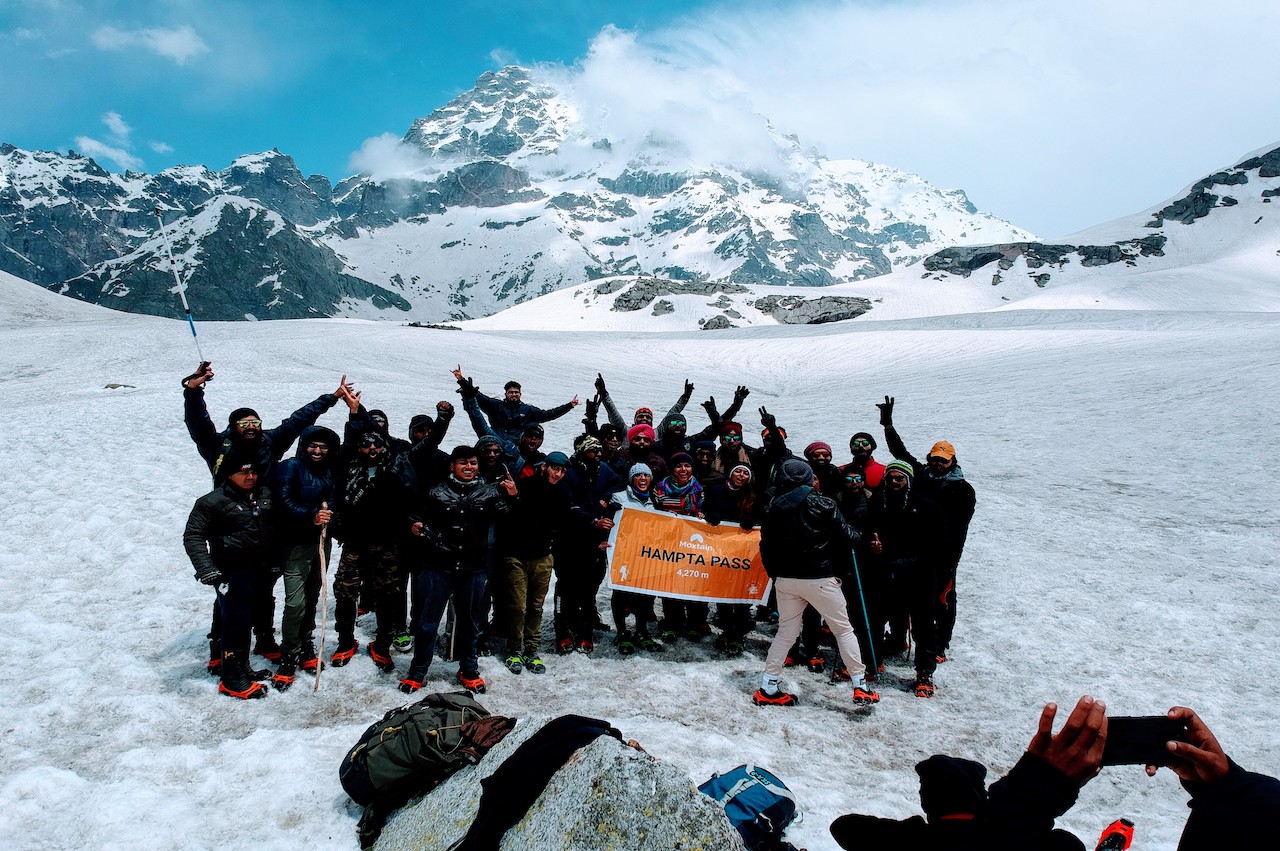 May-October is the peak season for Hampta Trek and the temperature stays between 12°-20°C during the daytime and goes down to a few degrees above and below 0°C during the night. 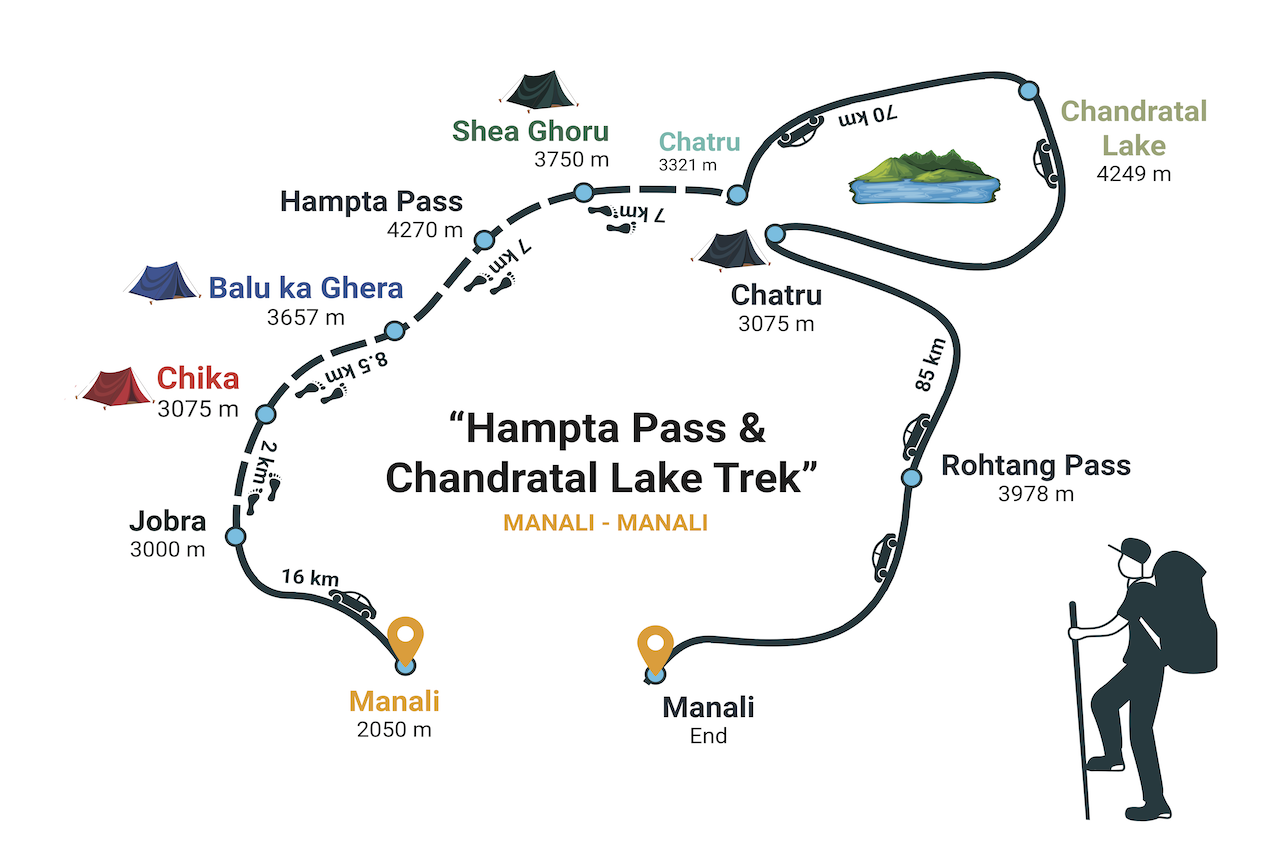 The starting point of this trek is Manali, which can be reached by a combination of flight and road journey. First, you have to get to Delhi in your choice of transportation - flight, train or roadway.

From Delhi, you can also take an overnight bus directly to Manali, either in a private Volvo bus, most of which leave between 5 PM and 6 PM, or the state buses, the last of which leaves at 8:30 PM.

However, if you taking the roadway, Manali can be reached from cities like Chandigarh, Dehradun, Haridwar, Dalhousie, Shimla, Dharamshala, and other nearby cities.

For trekkers, it is important to keep in mind the schedule and the reporting time for a team briefing and take the bus accordingly. It would not be a great start to the trek if you are late to the first meeting of the journey.