Written by Manvendra on 11-Jun-2020
Read About Author

Hampta pass is a beautiful trek that mesmerizes you with its views. It starts from the beautiful hill-station of Himachal Pradesh, Manali, and takes you through the lush green Kullu valley into the Dry-barren cold desert of the Spiti valley. And this isn't all if you include a visit to Chandratal Lake, it's an icing on the cake. It can be assumed as for trekkers returning from completing a trek to Hampta Pass and witnessing its glory, passes like Rohtang pass won't be of much importance but it should be brought to one's notice that around 10,000 people visit Rohtang Pass in May and June month every day as soon as its made accessible for tourist by the authorities, as this is the time of summer vacations when the plain areas are burning with scorching sun, Manali starts to uncover from the heavy snow.

Hampta Pass is not a motorable pass and opted by trekkers for some adventure. Also, many shepherds opt for the trek route as it offers them vast grasslands to herd their goats and sheep. Changthangi goat is a very popular goat in these herds. Parallel to Hampta pass is Rohtang Pass, it's a motorable pass and is of much social and economical importance. Leh is connected to the rest of the World by two hill-stations, Srinagar and Manali, which have Zoji Pass and Rohtang Pass respectively en route. While in winters, due to heavy snow the passes get closed and consequently, the connection of Leh with the rest of the world too. So, it can be very clearly understood how important Rohtang Pass is to the people of Leh. Zoji Pass can also be considered but Srinagar has its own challenges.

Hampta Pass trek in June - Beginning of the season

As summer approaches, the hills of Manali uncover itself from the winter snow. Hampta pass trek is partially accessible in June if the winters had a heavy snowfall. Trekkers are able to make it all the way to Hampta pass in June but are not able to cross the pass and access the Spiti valley. In the first half of the month, there are chances that you will have to return the same way. But do not doubt on the adventure part, there is too much snow which makes crossing Hampta Pass in June, no less of a then a summit climb. 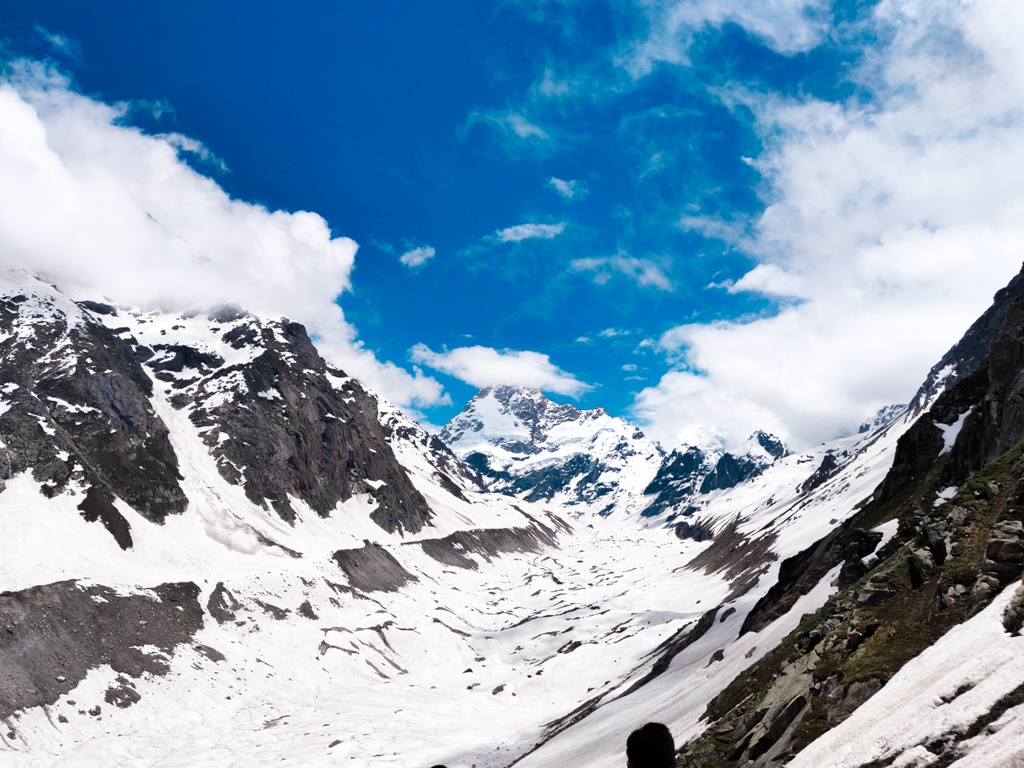 If you go for the trekking in June, many times you will find an additional campsite Jwara which falls between Chika and Balu ka Ghera. Usually, people ask how difficult is Hampta pass Trek? and when they find an extra campsite added to the itinerary, they become more cautious. Hampta Pass is a moderate trek but in the opening month i.e., June, due to the heavy snow deposited it becomes a bit difficult.

Usually, the itinerary is planned from day 1 at Chika campsite to Balu ka Ghera campsite on the second day but as the route is covered with knee-deep snow and in such situation, the elevation to the Hampta pass is very much challenging, hence another campsite in between is added to make it less exhaustive while climbing. While returning, the descent is comparatively easy and the middle campsite can be skipped.

But as the summer proceeds, the snow starts to melt and the route becomes more and more accessible with every proceeding day. Now, if we compare the trek route in June to the route in July or August, it's a completely different picture. 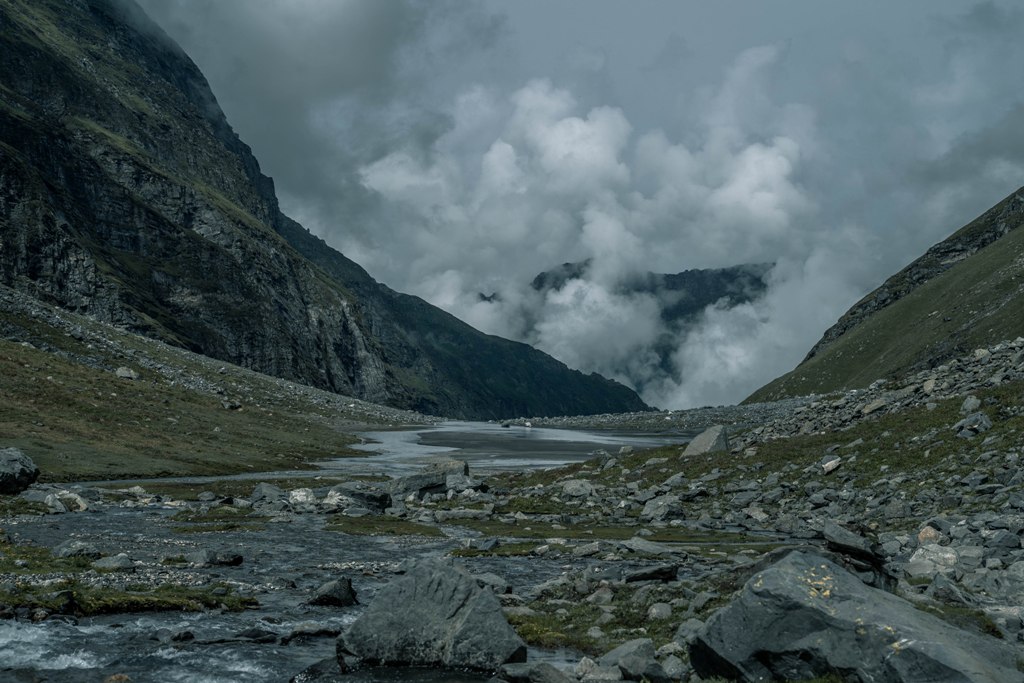 The pass is completely accessible right to the last campsite, Chatru, and the route is clear of snow, though you will find snow in the surroundings and the peaks also remain covered, mostly.

The region of the Kullu valley (the area before crossing the Pass) is clear of snow and is now a green pasture and colourful flowers blossom up the valley making it a beautiful scenery for trekkers opting for the trekking in monsoon season. What also adds to the scenery is the numerous waterfalls everywhere around, these are just the seasonal ones that just pop out at every corner. And as you cross the pass, you enter the Spiti valley. The region is very much similar to a desert, even due to this geographical terrain the whole Spiti valley is often referred to as Cold-desert. After the snow melts in this region, a barren-rocky trail is your companion all the way to the last campsite.

And now as the snow is gone so are the snow bridges, and while trekking the route, you will confront a number of mountain streams and nallahs. One of them is Rani Nallah, the trekkers cross it while moving from Chika to Balu ka Ghera. This river crossing is a very important part of the adventure that trekkers seek. Rani Nallah is a knee-deep stream with water cold enough to chill your bones. The Hampta Pass temperature is chilling but is nowhere close to the temperature of the chilling stream's temperature. 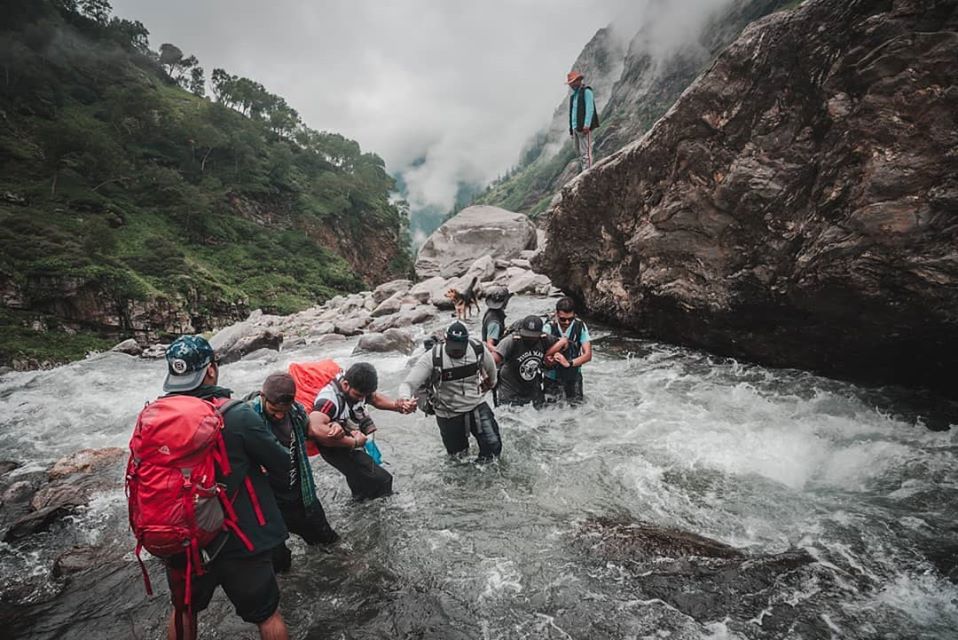 The rain does pour heavily at times but usually the place witnesses mild showers. But proper rain gears are very much recommended as rainfall is unavoidable in this season. It leaves you all drenched if the gears are not adequate. And while at the campsites, you don't have any option to get your gears dry or get a replacement.

But with all these ups and down, Is Hampta Pass safe?

Hampta pass trek is as safe as riding a bike on a highway, if you have adequate gears and you obey the rules, you will leave the trek with pleasant lifetime memories. The trek route and itinerary are planned very much in consideration with regular people and assuming that they are not accustomed to long walks. But there are some mishappenings at times which you come across in the news.

The itineraries are designed in a way that under the supervision of experienced trek leaders and guides, the trek can be completed easily and in a fun way. But you will find a number of trekkers without any prior experience and with no guides, taking up the challenge.

The best time to visit Hampta pass is from mid-June to August. The trek is accessible from the month of June, that's when the season begins and it continues to somewhat around mid of August.

Though many times in June, there are times when the complete route of the Hampta pass trek isn't communicable and people have to compromise on the itinerary. And if you visit the pass in August, you will have a completely accessible route but still, it has rainfall, which cuts short or lengthens your trek itinerary days. From August onwards, the mild showers of monsoon in Hampta Pass trek get replaced by snowfall and after this, it's not considered a probable time to visit the trek, as with the increasing snow the trek becomes more difficult. And with this snowfall, the return route of the Hampta pass trek via Rohtang pass might also get closed.

The trek is available only within this window of three months June-July-August and you can consider any of these three months as the best time to visit Hampta pass, irrespective of the weather, it's always a pleasant experience. Consider the weather challenges as an adventure part of the trek, for which many trekkers even return for their second time.

Though the trek ends at Chatru and one can return back to Manali via Rohtang Pass. The distance is around 80kms and takes around 5 hours but may vary due to traffic.

If the Hampta pass trek is complimented with a trip to Chandratal Lake, it will be an amazing experience. But if you are planning for the trek in June, there are chances that you will not be able to reach the lake. 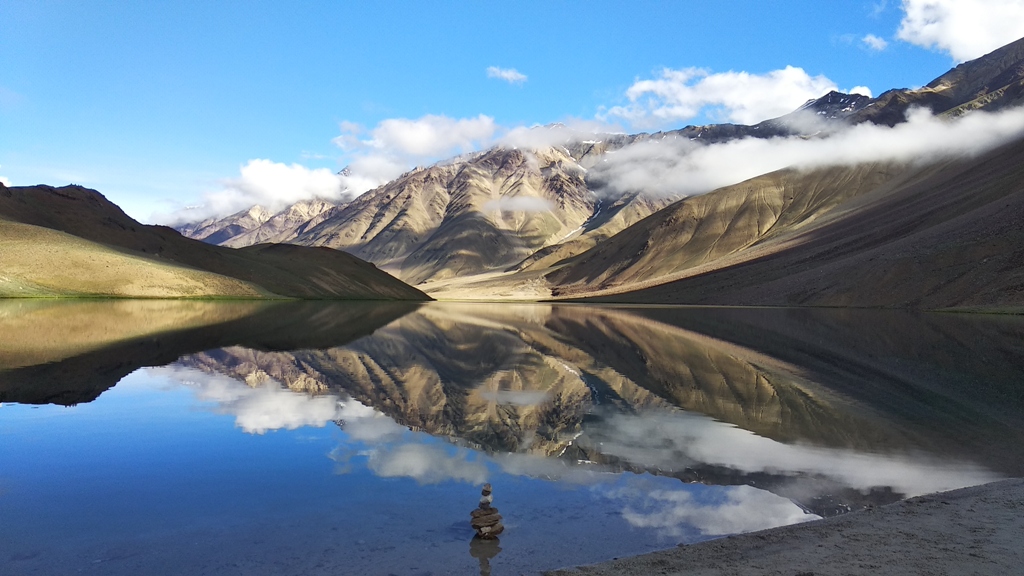 And if you are planning for Hampta Pass Chandratal trek in Monsoon, your chances for reaching the lake are high. Chandratal Lake is a crescent-shaped high altitude lake. It is around a similar height of Hampta pass, its elevation is a lot of equivalent to the Hampta Pass itself, around 4250 meters. Chandratal Lake usually becomes accessible from the end of June and the beginning of July.

If we speak for the Hampta Pass trek 2019 season, the pass wasn't crossable in the whole month of June. Our first batch to cross Hampta pass, reach Chatru and then Chandratal lake was on 28th June 2019.

It's already 12th June and if it wouldn't have been for the COVID-19 outbreak, the adventure would have already been started.

Stay safe. Yes, it's a difficult situation everyone is facing but it will be over soon.

Written by Manvendra on 11-Jun-2020
Read About Author