Written by Ekta Rehalia on 19-Jan-2022
Read About Author

Of all the Marvellous Crossover treks in India, Pin Bhaba pass trek is the grandest one. It is a high mountain pass with an Elevation of (16,100 ft). It sits quite high on the placid of Northern Indian State of Himachal Pradesh in the Indian Himalayas. Indian Himalayas has planet's highest ranges, including Mount Everest.

Now when I say Crossover trek, what I mean is that you can literally have the dazzling views of the two distinct worlds at the same time altogether. Thrilling! Isn't it?

The Pin Bhaba Pass is one such famous trek in Himachal that can be easily accessible from Shimla, adding to the another factor of trekking near Shimla one can look for. The base camp or head start of this trek is Kafnu, a small village in Kinnaur which is only 200km away from Shimla.

The Pin Bhaba Pass Trek is the journey between the gleaming and rich Bhaba valley in Kinnaur District and frigid and barren Pin valley in Lahaul and Spiti District (A part of the cold desert), Biosphere Reserve of Himachal Pradesh, with adjoining borders Pin Valley National Park and Rupi Bhaba Wildlife Sanctuary. The National Highway 5(India) Connects Kinnaur District and One (Manali-Leh National Highway) Connects Lahaul and Spiti District.

It's like the tale of the two valleys. It has the legacy of the 'finest Crossover trek ever' that no one has witnessed before.

The best part about this trek is that unlike other treks it can be accessible in Monsoons too, that's why it is also known as the famous monsoon trek in Himachal. If you are a monsoon person then this is the best one to do, though the ideal time to do this trek is from June to September.

In the month of June, you can see snow melting all around on Bhaba Valley. Those who love to play with snow should time their trek on june. There would be ample amount of lush green forests, brown woods, that makes it pretty scenic and it nearly looks like Switzerland. Kara offers stupendous 360 degree panoramic views of beautiful picturesque scenery which looks similar to Kashmir.

In the month of July and August, you will witness few showers of rain, that won't spoil your trek but will nurture the wildflowers, forests, landscapes, especially Kara, the grasslands, meadows become much more greener and beautiful, that's why it can be accessed in monsoons too.

In the month of September, that is post Monsoon, the clouds are gone, therefore, the skies become clearer, which offers clean and clear picturesque views from Bhaba Valley, The mountains of Spiti look stunning.

You can time your trek anytime between june to September. It would feel like doing different treks on different days, though you are doing one. 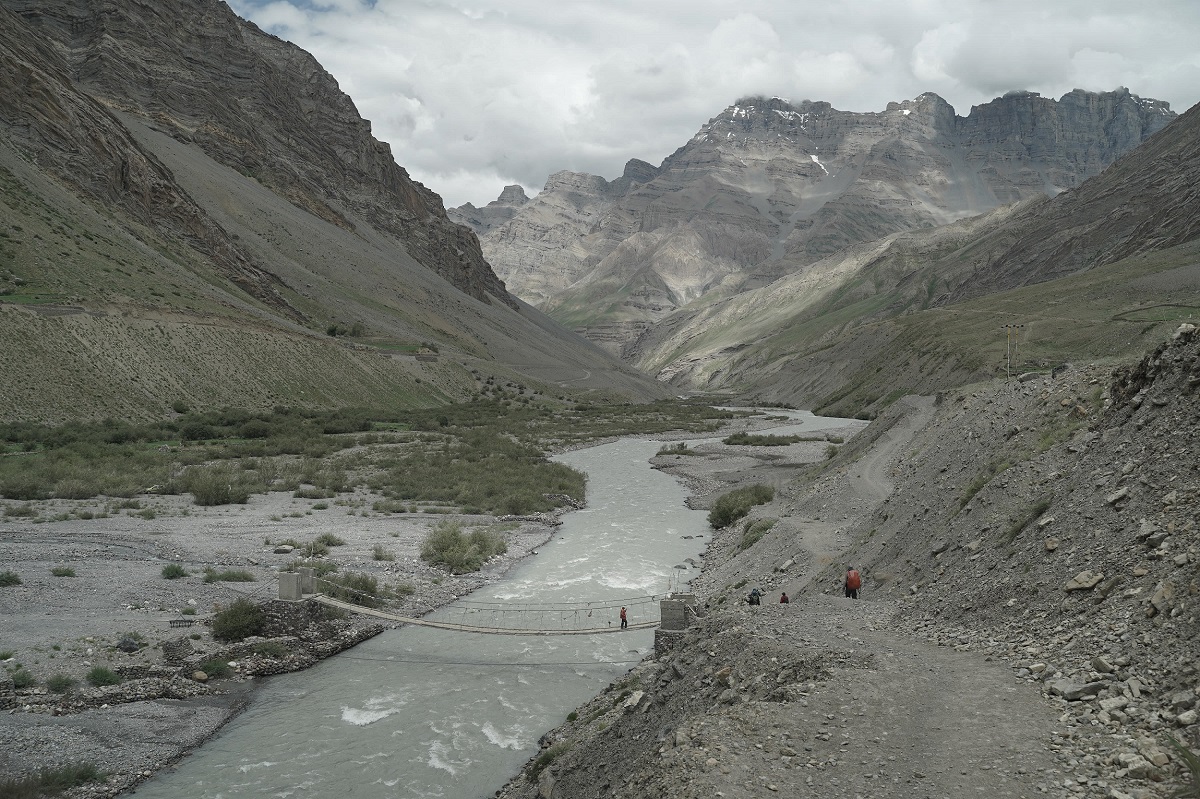 In summer i.e. from mid may to june, it remains good and trek-friendly. It is usually sunny in day and little bit cold in night. You will experience snow in summers too. Now you may wonder that how on earth is it possible to have snow in summer, well, it is a residual winter snow. It is found in abundance. You will witness snow melting on all the Pin Bhaba Valley.

In Monsoon i.e. from july to august it is little windy and cold due to drizzles drizzling. It is quite haze in day and extremely cold in night. Flowers bloom and grasslands change its colours from green to orange.

In September, post monsoons, the weather remains crystal and clear like water. It is little sunny and clear in day and cold in night. The weather upturns after mid of the October, there is immense snow and cold, which is why the trek is closed after October.

In Monsoon i.e. from july to august it is little windy and cold due to drizzles drizzling. It is quite haze in day and extremely cold in night. Flowers bloom and grasslands change its colours from green to orange.

In September, post monsoons, the weather remains crystal and clear like water. It is little sunny and clear in day and cold in night. The weather upturns after mid of the October, there is immense snow and cold, which is why the trek is closed after October.

The summer temperature lies between 13°C to 18°C in the day and in night it drops to 7°C to 0°C. It's the best time to do the trek as the temperature remains in your favor.

The monsoon temperature lies between 5°C to 12°C in the day, in night it descends to 5°C to -0°C. Make sure you keep atleast three warm layers for night.

About winters, it is a very high altitude trek, so, it becomes impossible to do the trek, as there is extreme cold and snow.

About winters, it is a very high altitude trek, so, it becomes impossible to do the trek, as there is extreme cold and snow.

It is Seven day long and difficult yet adventurous trek, accessed from Shimla.

Day one: Drive from Shimla to Kafnu.

The ride from Shimla to Kafnu is 200KM. Kafnu is a small village in the Bhavna Valley of Kinnaur. It is located on the banks of Sutlej River. It acts as the base camp or a head start of this trek. It takes around seven or eight hours to reach Kafnu. But, in mountains it takes quite a bit longer to travel this amount of distance due to narrow roads and ocassionaly stopping of the vehicles due to unwanted traffic occurring because of the flock of sheeps strolling on the roads.

It's a beautiful ride of having views of coniferous forests all around, splendid valleys, the Karcham Wangtoo Hydroelectric Plant and phenomenal Bhaba River flowing along with you.

The trek from kafnu to Mulling is almost of 11km, and it takes around eight or nine hours to cover the distance. It's a moderate type of trek covering 2.6km easy walk on motor road with trucks going on and then gradually ascending of 4.5km followed by 1km of level walk and then crambling up all the way to Mulling. Mulling acts as the first campsite of the trek. The elevation elevates from 7,900 ft to 10,700 ft.

Although the trek is quite long, but it won't feel long enough when you have the mesmerizing views of beautiful flowers, especially roses, they are found in abundance, dense coniferous forests, the Kafnu Dam and the Bhaba river that will accompany you on the way, the apple orchards, and small patches of gardens of department of horticulture surrounding you all the way.

The air will feel like a fresh tinge of sweet fragrance eventuating from the kind of atmosphere that is surrounding you, be prepared to feel the imperturbable tranquility all the way.

The day three will lead you from Mulling to Kara in almost four or five hours as the trek distance is only of 6km. It would be relatively short and easy, of having gradual ascent of 3km and 1.5km of steep ascent and then recuperating the remaining distance. The altitude gain would be 10,700 ft to 11,700 ft.

You will witness beautiful small grasslands full of boulders, meadows that you have never been to before, vibrant mules, snow dappled mountains, stunning peaks adding beauty to the journey.

The best part about this trek is that it unfurls the mystery of why Bhaba pass trek is known as the transition trek. In span of two days, the transition from dark forest to a grand meadow full of flowers, just like an executed transition video, you won't even realize when the switch will happen in real, and that too in a crisp and elegant manner. You probably would have seen transition videos on social media, but just imagine how it will feel when you will experience it in real.Exciting! Isn't it?

The distance from Kara to Phutsirang is approximately 5km, and it will hardly take three or four hours to cover the distance. It is a moderate type of trail of steep ascent throughout. The elevation would be 11,700 ft to 13,500 ft.

Though the trek is quite short but it would be quite challenging as you would have to cross the icy streams barefoot. Yes, you heard me right, 'crossing icy streams barefoot'. Well, you may think that why we can't just cross the streams with boots on, there's a reason behind this. If the boots get wet, then they won't dry up immediately, and just imagine what dilemma it will posses for the 'D' day that would be on the next day, walking all along to the much elevated region with your boots wet, you surely won't want to fall sick so in order to not to endure much on 'D' day, it would be better to endure it now.

Day five would be long and hectic of almost covering up of 12km of distance, it will take around ten or eleven hours. The altitude gain would be from Phutsirang to Mangrungse (13,500 ft) via Pin Bhaba Pass (16,100 ft).

This is the day when you will require helmets and crampons, as the trail would be full of ascends and descends, of climbing high slopes to trailing towards to high mountain passes, of leaving the green and lushy Bhaba valley to moving towards barren and alien like Pin Valley, of leaving behind the green and life like terrain to almost dry and sterile path, of talking about how the view of crossover would feel like to actually witnessing it, it would be of great hiking experience in Himachal.

After this tiresome and exciting journey you have to descend back to Mangrungse Camp.

Day six would be the last day of the trek. The distance from Mangrungse to Mudh is 17Km, and it will take around seven or eight hours to cover the distance. It is a steep descent throughout.

The first campsite from Mangrungse to Mudh would be the Bara Boulder which is 4km away, and then descending through a patch filled with moraine. The tributary of Pin river would be 300metres away. Mudh village is located on the other side of the Pin river, you have to cross the Pin river through suspension bridge and climb it all up to reach Mudh Village.

Drive from Kaza to Manali would be 200Km, and it will take approximately ten or eleven hours to reach there.

En route would be Kunzum pass and Rohtang pass that will make the ride more beautiful than ever. The views that these two Mountains offer will render you dumbstruck.

This ride would act as a reminisce of your journey as Hiking in Himachal as if it is saying to you "Please visit again", and from how you started to how it is ending, it would be of great adventure.

If you want to do challenging and adventurous trek in Himachal, you should definitely opt for the Pin Bhaba Pass. Not only it is grandest Crossover trek in Himachal but it is fun to do too, From stunning crossover to changing landscapes, from witnessing Green and lushy Bhaba Valley to Desolate and dry Pin Valley, from coming across various cultures and diversity to watching different plants and vegetation , it stuns the world with its exquisite beauty.

Written by Ekta Rehalia on 19-Jan-2022
Read About Author