10 Best Himalayan Treks to do in Spring Season of March, April & May

10 Best Himalayan Treks to do in Spring Season of March, April & May

Spring is the season of new beginnings and a perfect opportunity to be at one with nature as everything is exhilarating and worth looking around. Therefore, we invite you on a journey that makes you fall for nature a little more.

Spring treks in India are a fair chance to spend some quality time with nature and your own self as it won’t be freezing like winters and scorching hot like in summers. Every little detail would be colorful and picture-perfect.

The season starts in march and lasts till May. The season when the pink flowers bloom, new leaves arrive and earth seems to come to life again.

The Himalayas provide a wonderful adventure with subtle mountain vistas and a flavour of local culture and traditions. The moods of the villages at the slopes of the Himalays are a delight to witness when spring emerges after a cold winter, writing a genuine Himalayan experience. At the end of March, new surroundings and freshness is common, adding to the beauty of nature as it melds with the lush greens all around. The magnificient splendour of springtime flowers becomes one of the few reasons to visit the mountains during this time of year. During this season, the dawn amidst the flaming red rhododendrons, with the majestic peaks in the background, is a sight to see under a clear sky. Therefore, Uttarakhand treks in March provide you the best experience of trekking.

HOW DOES TREKKING CHANGE DURING THE SPRING SEASON?

Spring in the Himalays is one of the greatest seasons for hiking, as nautre reinvigorates itself with gorgeous blossoming budding of flowers and verdant fresh leaves. Between the extremes of summer and winter, it is a season of fresh possibilities. Your cells are renewed by the reasonable and welome temperature, which makes you jump for delight with enthusiasm and freshness. The major Himalayan hiking routes greet you with loving arms. The major unique wild life in the mountains, amazing flora and fauna waltz in front of your eyes, the wonderfully adorned birds hop in delight to commemorate this season, and all of this is worth a fortune when trekking in Himalays. 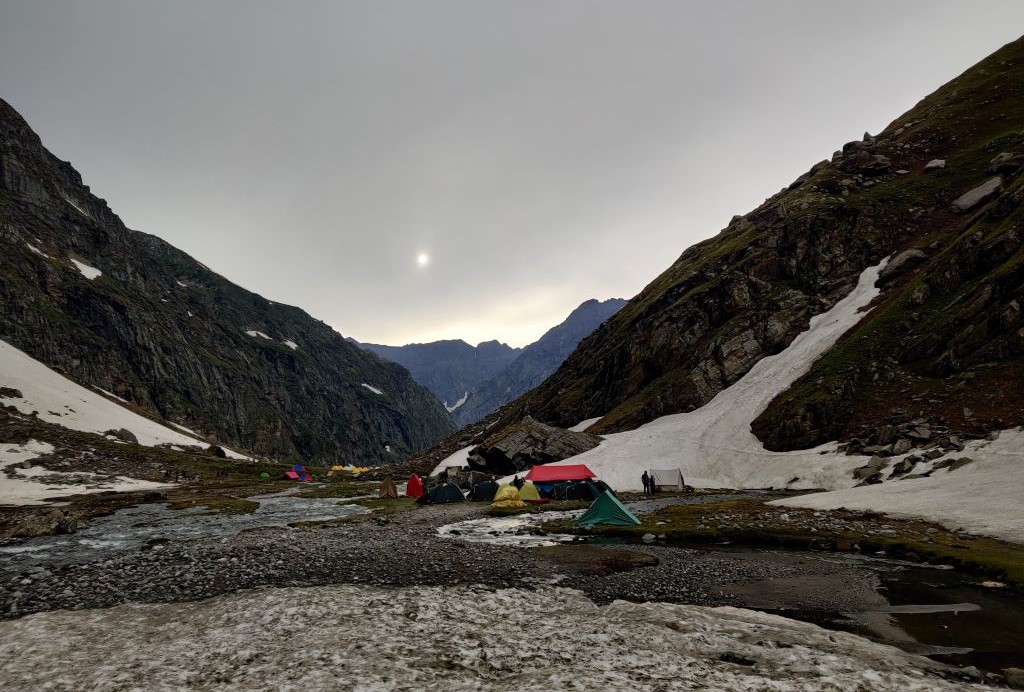 Situated in the western periphery of Garhwal, in the Uttarkashi district, Har ki Dun is full of scenic beauty and charismatic meadows.

One of the reasons to explore this beautiful place is its affability to trek both in summers as well as winters.

The kind of wildlife and fascinating views will keep you rooted in this enigmatic surroundings.

The cherry on top is the temple based in Osla devoted to Duryodhana, about 13 km away from Sankri that lies in the steep mountain trail to Har ki Dun.

Also known to be the oldest treks in the Himalayas, the “Valley of Gods”, many people believe the route of the trek was taken as a pathway to heaven by the Pandavas.

The trek is nothing but a wonderland that leaves you stupefied because of its beauty. 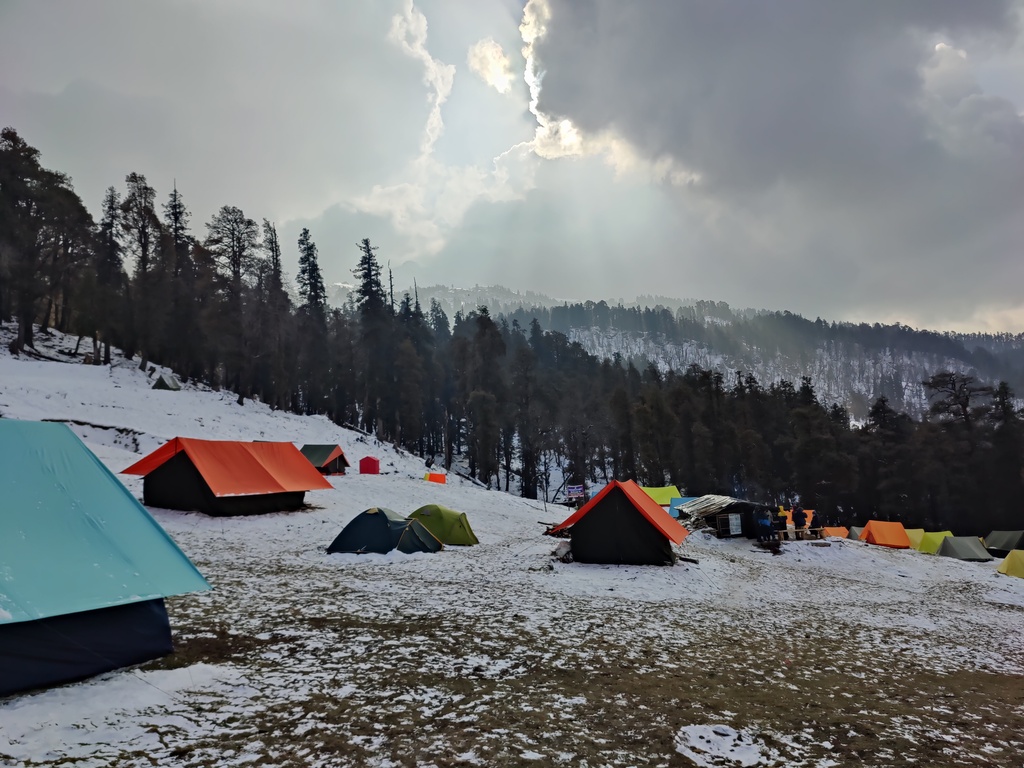 Treks in the spring season and KedarKantha trek go hand in hand. Tall and crisp mountains, the stunning views of the Himalayan peaks, pose for a perfect opportunity to fill your cameras with some breathtaking pictures.

This is One of the most popular treks in Uttrakhand, situated at a height of 3800 metres from the ground, in the Uttarkashi district of Uttrakhand.

Kedarkantha is the type of trek which is easy to climb and leaves you awestruck with its mesmerizing Himalayan skyline.

One of the best things about this trek is to be able to witness snow-covered mountains from the dense pine tree forests. Dedicated to Lord Shiva, it is a complete package to make you feel overwhelmed and rejuvenated. 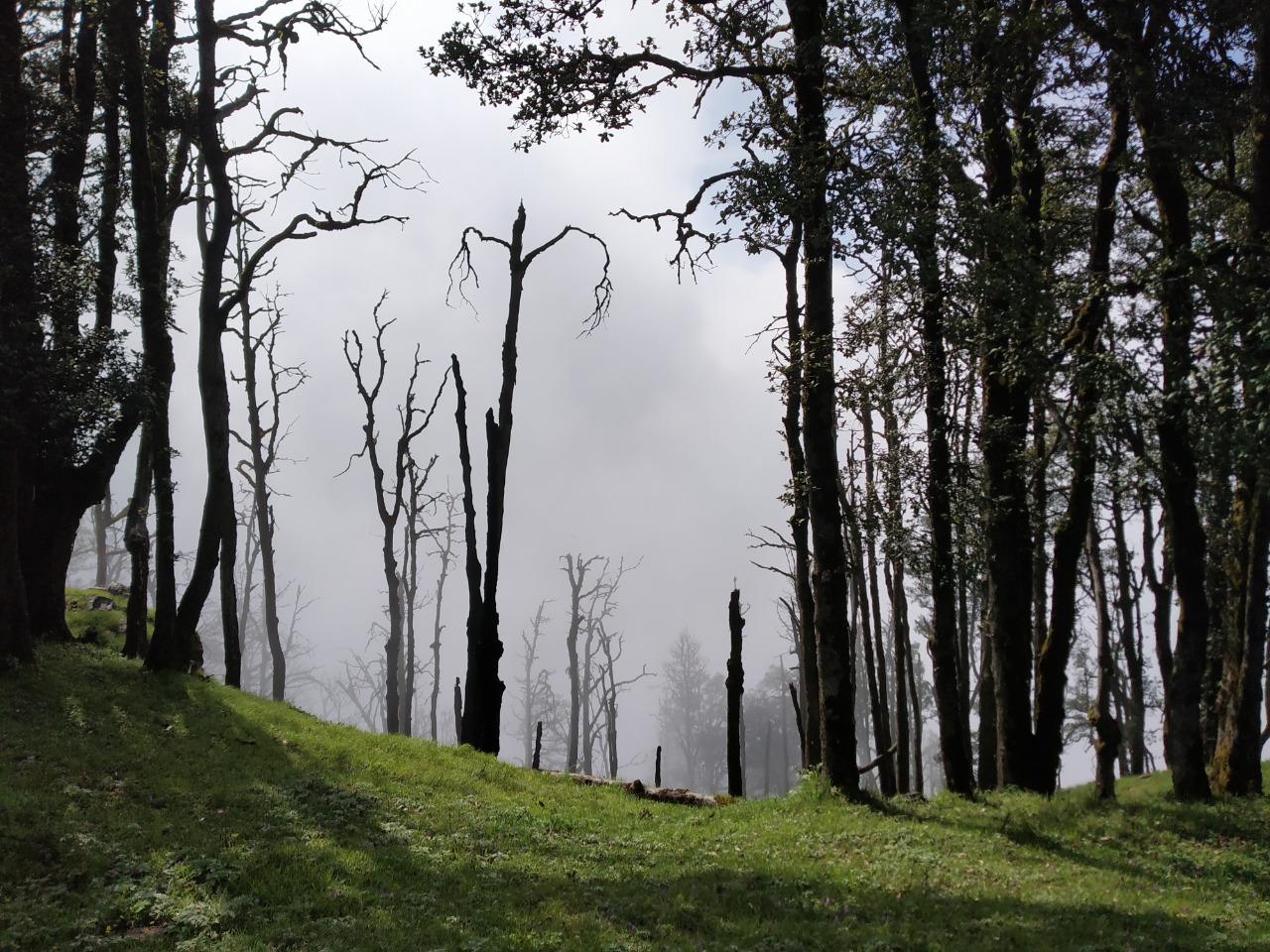 Nag Tibba is also known as the serpent’s peak, and believed to be the abode of the “God of Snakes”.

Nag Tibba is the highest peak in the lower Himalayan region, located at a height of 3,022 meters. It is Located 57 km away from Mussoorie in the Garhwal region of Uttrakhand.

Its pleasant weather and exotic views make it an experience of a lifetime of trekking in India. It serves to be a perfect gateway for novice hikers.

Covered under the canopy of oaks and rhododendrons and during the spring treks, you will be welcomed with blossoms and greenery all around.

From the highest point, one can recognize, Bandarpoonch, Kedarnath, Chanabang, and some of the major mountain peaks around.

You may like this: Prefect Beginners Trek in Uttarakhand! 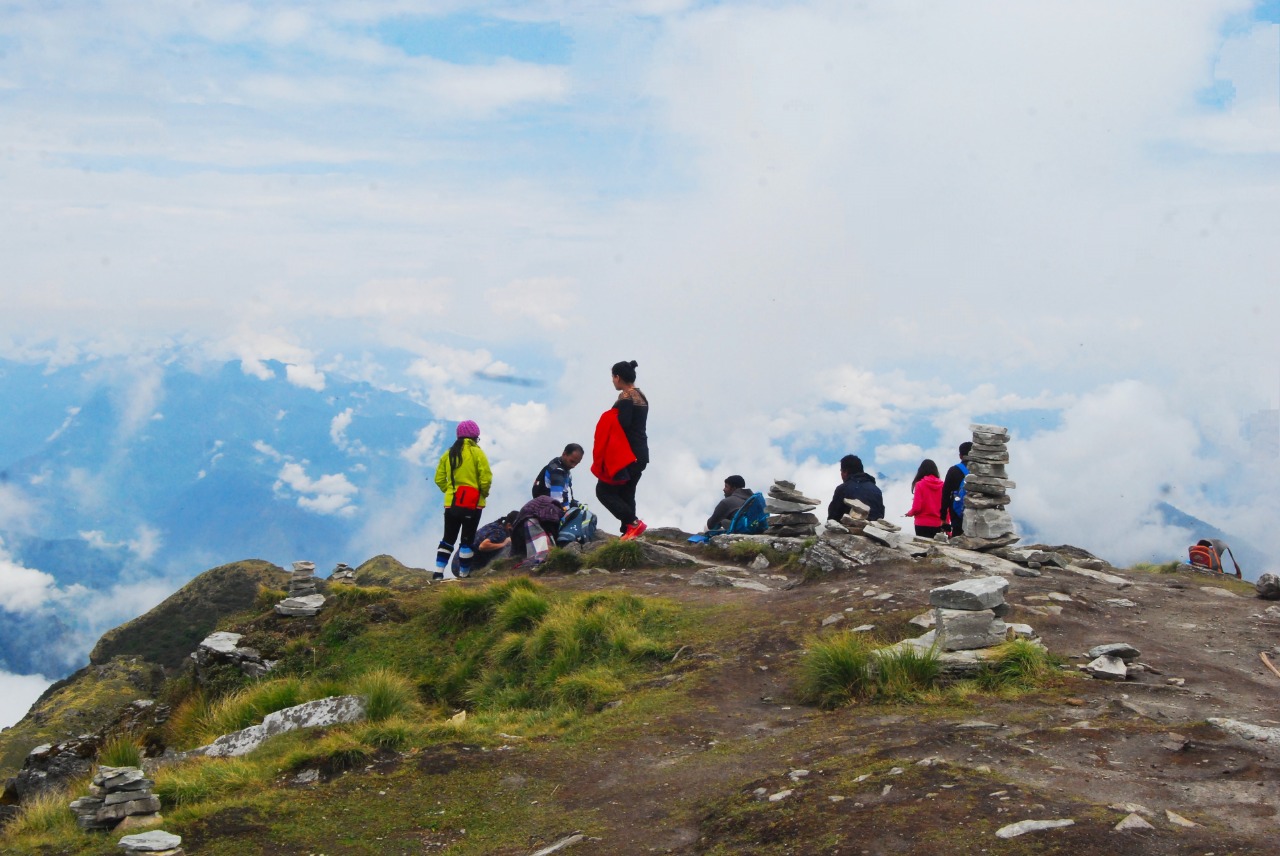 Chopta- Chandrashilla trek, situated at an altitude of 12,110 ft from the sea level is one of the best spring treks in India. It is dense with wildlife, and red rhododendrons bloom everywhere. Trekking in the spring season is a treat to the eyes.

An ideal time to visit the Tugnath templeis in the month of May which is a perfect point to witness the magnificient sunrise at the Chandrashilla peak. It features as one of the best Himalayan treks in May.

Once you reach the highest point, you will spot how everything sparkles when the sunlight touches the ground, with the massive mountains surrounding you on all sides.

The trek is highly rich in flora and fauna and opens up to a gallery of beautiful snowy peaks all the way.

This type of trek makes you feel alive again, everything around is so natural and pure that you feel as if all of it is surreal! The Brahmatal has nested about 12,150 ft in the middle of the Himalayas in Uttarakhand region.

Brahmatal trek is perfect for the spring season. Appealing meadows and lakes make everything like a painting. It is one of the best treks that counts into the experience of a lifetime.

Doing the Brahmatal Trek in March you witness flower beds along the trail dusted with snow. You will get to experience both at the same time. 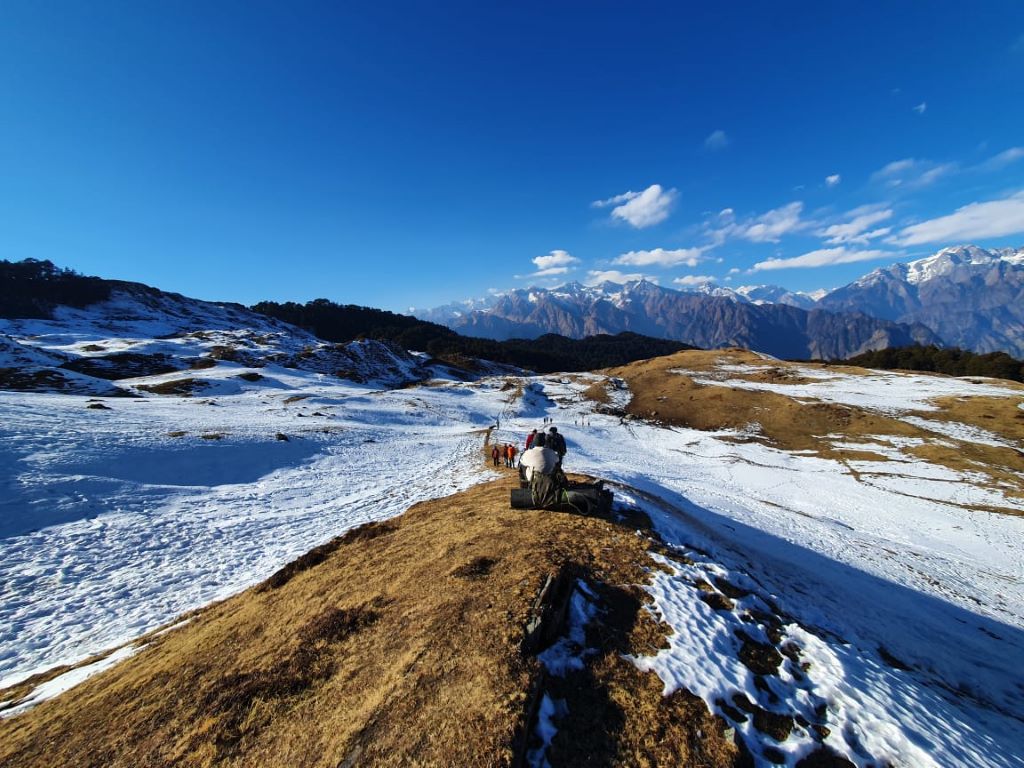 Pangarchulla trek can be categorized under one of the difficult but high on adventure treks in India. It is Situated in Nanda Devi National Park, in the Garhwal region of Uttarakhand.

Just when you reach the high point, the view makes it exceptional. Pangarchulla trek is one of a kind, where you feel a sense of accomplishment, the hustle gets real here but in the end, everything seems to be worth it.

The final flourish to this beautiful experience is the colorful forest that you get to witness in the spring season.

You may like this: Best Places to Visit in Megahalaya. 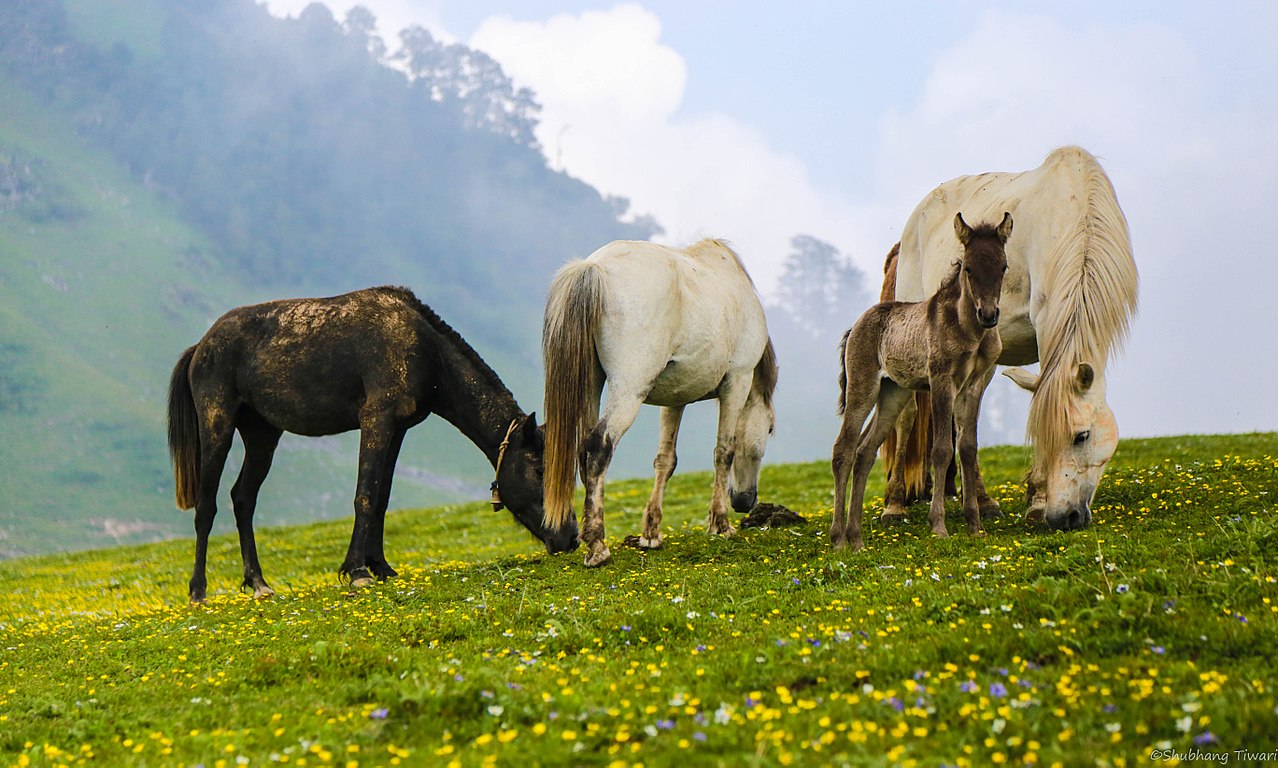 Dayara Bugyal trek is a perfect plan for you to explore this spring season. Dense green meadow and beautiful mountains on the trail makes it a perfect outing during spring season.

Based at an elevation of 3048 meters, the trek serves to be a perfect outing for beginners. Seeing these mountains just popping out of the meadows of Dayara is the reason why one must do this trek.

Located in the Garhwal region of Uttrakhand, it’s the Dayara hills that transports the trek to another level.

You may like this: Dayara Bugyal in Different Season. 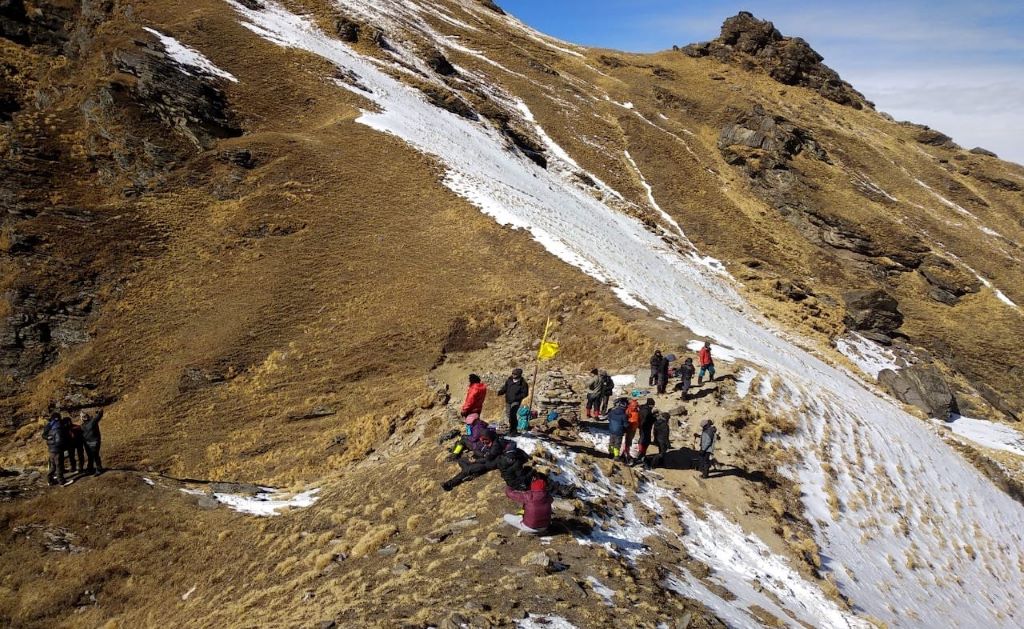 Kuari pass Trek is one of the most beautiful treks in Uttrakhand. Starting from Joshimath situated in Chamoli district of Uttarakhand at an altitude of 12,763 ft, this trek has an array of enthralling places to visit

The region was discovered by Lord Curzon and also known as the Curzon trail.

The beautiful trail takes you through mesmerizing Himalayan meadow also known as, ‘Bugyals’ by the natives. The trek is also filled with beautiful Oak and deodar trees.

Rhododendron trees, which bear flowers of a fiery red color, are also found in abundance in these mountains. The trek also tends to have Pancha Prayag- Devprayag, Karnaprayag, Devprayag, and Rudraprayag, where rivers like the Pinder, Kaliganga, Nandakini, Birehiganga & Dhauli Ganga converge.

Sandakphu trek is one of the most beautiful and wholesome treks to be ticked in spring season. Sandakphu is the highest point of West Bengal known for the prevailing attractions like, Singalila ridge, which forms the bridge between Sikkim/Darjeeling of India and Nepal. This is the reason the trek is also called the Singalila Ridge trek.

The view of the Nepal Himalayas including Kanchendzongha range, Makalu, Everest, Lhotse, Jannu (Kumbhakarna), Chamlang, Baruntse and a host of Sikkim peaks are a treat to the eyes and the peaks also configure to the shape of ‘Sleeping Budhha’.

The trek also serves to be the home of numerous species of birds and flowers. This region in the Eastern Himalayan is a hot spot and also shelters the endangered Red Panda.

The blooming of rhododendrons and magnolia turns the forest red, pink, and white during the spring time and the trekking experience is a spellbinding one. 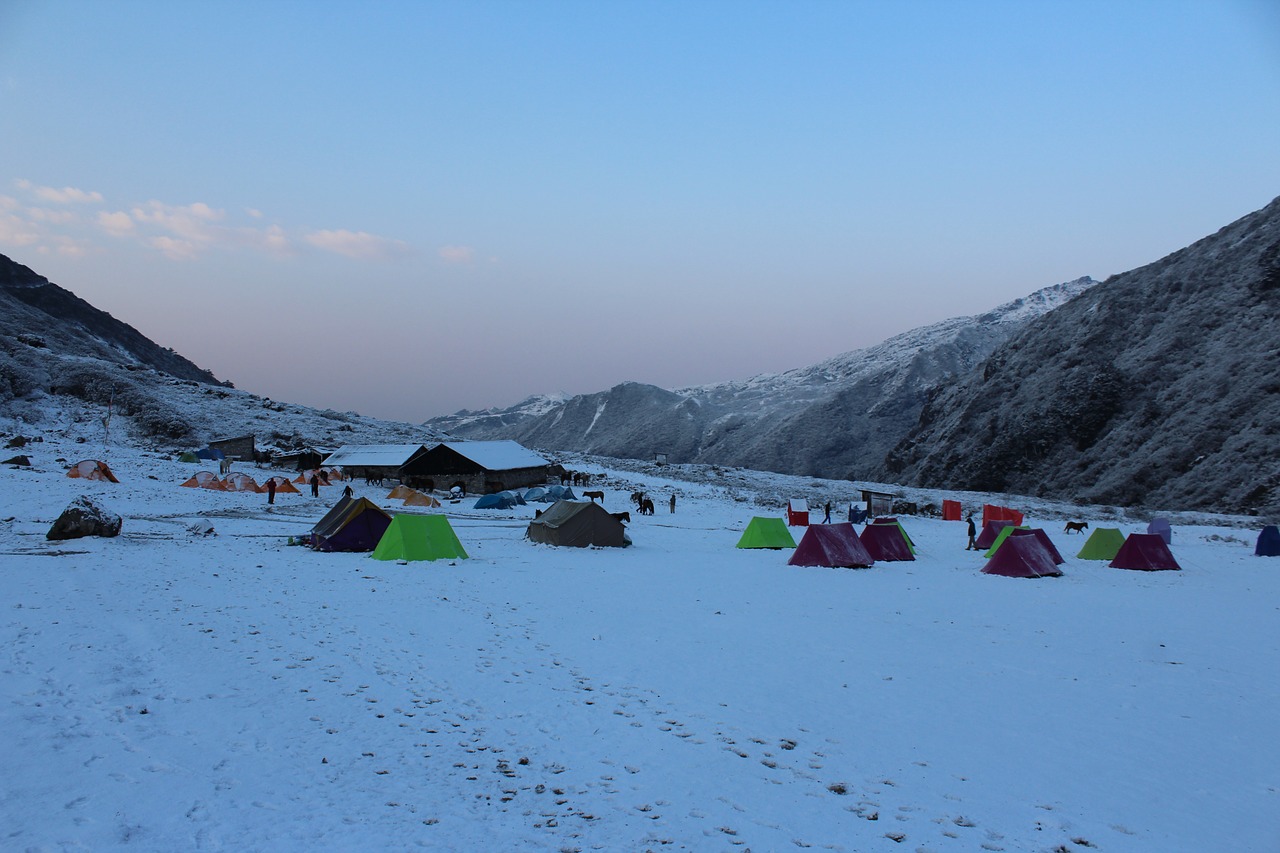 Goechala trek is the golden opportunity for you to experience the spirit of Sikkim. Goechala takes you where to the beautiful scenic beauty of Kanchenjunga abides.

Standing at an altitude of 15,100ft, the Goechala trek gives you many reasons to get in awe of nature, the tear-shaped Goecha lake, snow-covered beautiful white Himalayas, the amazing view of sixteen beautiful peaks visible from Dzongri top, fascinating meadows, and the dazzling Himalayan forest.

The trek takes you through the serene beauty of Sikkim and the Himalayas. The region through which the Goechala trek is designed is designated as Kanchenjunga National Park.

Goechala Trek, is one that experiences maximum popularity, since its promises splendid scenic extravaganza and thrilling adventurous hike that can leave the heart pumping, but filled with pleasure.